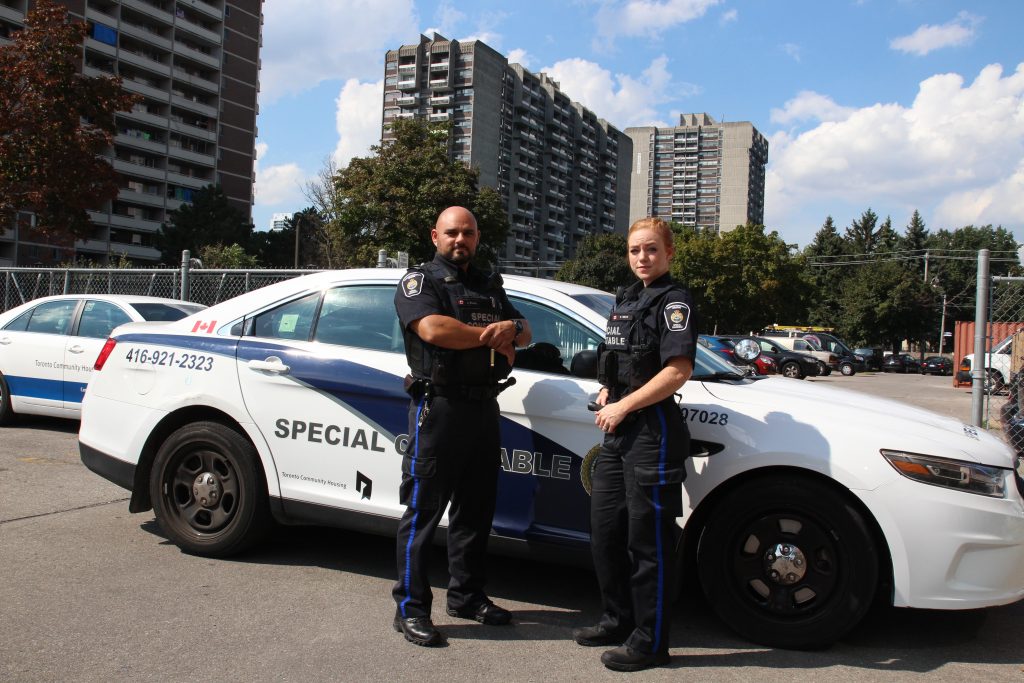 Now imagine getting to know an entire community; you know the names of the kids, who just got home from the hospital, whose cupboard is empty, who’ve just organized a baseball league…or who is coming forward for help in reporting a crime.

“The sense of responsibility is huge, and that’s what makes it rewarding. Knowing you make a difference is key,” says Special Const. Joel Assaly, with Toronto Community Housing Corp. (TCHC). “The days can be unpredictable, but the rewards of helping individuals and families to stay safe and get on with their lives are very real and tangible.”

Assaly has been with Toronto Housing for eight years. As a peace officer, he enforces statutes including but not limited to the Mental Health Act, Liquor License Act, Trespass to Property Act and the Criminal Code of Canada. As a special constable, he has the power of arrest and has use of force options: however, he does not carry a gun.

“We work alongside TPS to support investigations and provide in-depth neighbourhood expertise,” he explains.

In fact, Assaly says some special constables use their TCHC experience as a stepping stone to a career with the Toronto Police Service or another law enforcement agency. “It’s a great launching pad, but you can also have a long, successful career working in our Toronto neighbourhoods.”

Assaly first started in the East end of Toronto, where poverty and petty crime were constant challenges for both tenants and the special constables patrolling the neighborhoods. He says the most rewarding component of his 12-hour shifts is getting to know the residents, understanding their needs and linking them with various community services, when it becomes clear they needed more than law enforcement.

“When you suspect a mental health issue, and that person needs help, we become a first responder in that situation, and we can call in community resources or take them to hospital under the Mental Health Act.”

Special Const. Kelly Beck, who‘s been with TCHC for four years, says community law enforcement is about more than dealing with what’s in front of you.

“You want to know enough about what went on before – the person’s history – to help resolve and mediate,” she says. “I look for common ground, then I focus on de-escalation. The more you engage with community members, get to know them, the more effective you can be.”

Beck says she decided to move up to train as a special constable when she found herself unable to problem-solve effectively in her previous career. “As a security guard, I saw a lot of the same issues in the community, but in terms of mediating when problems arose, I had no authority.”

Whether it be co-operating with a police investigation, helping the community deal with the aftermath of a crisis, or attending a community picnic, according to Assaly and Beck, the real challenge, as well as the chief reward, of this type of career, is being seen as a part of the community, where residents aren’t afraid to approach you and ask for help.

“They know your name, and you know theirs,” Assaly says. “It’s a unique type of law enforcement: you want people to live peaceably as good neighbours, and you want the elderly or the more vulnerable tenants to do well. You don’t want anyone to fall through the cracks.”

“Getting to know the people in the communities, building trust: that is what often leads to intelligence gathering to prevent future acts of violence,” Beck adds. Like Assaly, she finds that a key part of the job is listening to people. “They can talk to us, vent, and tell us what’s going on in their lives.”

In some cases, keeping the peace is about helping people in crisis and following up if there’s been an assault.

“Again, when there is a mental health issue, we use compassion, the Mental Health Act and common sense,” Assaly says. In all communities, he’s finding, tenants are increasingly aware and appreciative of the role special constables play.

In response, Toronto Community Housing has been steadily adding dozens of new constables.

“There’s no doubt we’ve had a growing role,” Assaly says. “Tenants tell us feeling safe in their homes and neighbourhoods continues to be their top priority.”

Asked what characteristic is likely to get the nod as a new hire, Assaly and Beck are in quick agreement: “Patience,” they say, “is the one unsung trait in community law enforcement.”