Earlier this year, Toronto Community Housing Corp. (TCHC) hired 15 individuals to join the Community Safety Unit (CSU) as special constables. These recruits joined a team with members from diverse professional and cultural backgrounds. An integral part of onboarding the new recruits is pairing them with a coach officer: a special constable with experience working in the field who understands the dynamics of different communities. 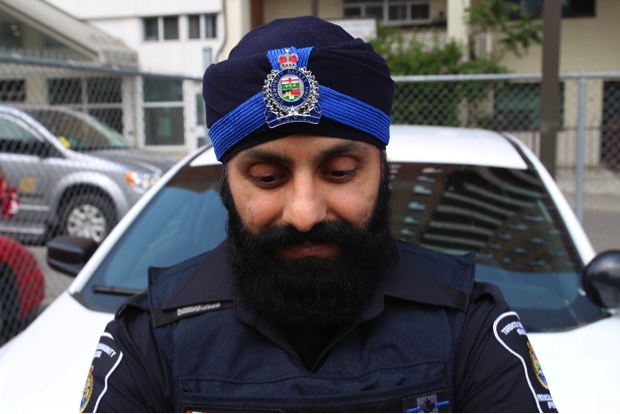 Hardeep showcases his turban. CSU made accommodations for his traditional headdress.

Meet the coach and the rookie: Special Const. Chris Ross and special-constable-in training Hardeep Sidhu. Chris has just over three years of experience, and Hardeep joined the CSU team a little over three months ago.

Although Chris and Hardeep come from different professional paths, both love the idea of having a job where they make connections with tenants and have a positive impact on communities.

Initially studying urban and regional planning, Chris quickly realized his desire for a different career. “I wanted a job with a little more action where I can engage with communities.” He eventually joined CSU because it was a job where he has a direct role in the community and the city.

On the other hand, Hardeep always had an interest in law enforcement. “I worked in corrections for six years because I wanted to help individuals rehabilitate and reintegrate into the community,” he said.

Creating more positive relationships with tenants by working in the communities is what attracted Hardeep to join the CSU. “I want to be on the frontline and help people that may need assistance. I want to show tenants that people from all different cultures and backgrounds can be in this role and be an inspiration to those who may not have access to resources or supports.”

As a new recruit, Hardeep has already made history in CSU by becoming the first Sikh Special Constable to have his uniform modified to accommodate his turban.

“CSU has been fully accommodating and wanted me to represent my religion and community and be proud of it,” said Hardeep. “They worked with me on the design and approved the final look.”

For Chris and Hardeep, wearing the CSU uniform is more than just than policing communities. It is about understanding tenants and the role special constables play to maintain community safety.

As a coach officer, Chris has a vital role in mentoring special constables in training. He notes the importance of giving constructive and positive feedback.

“It is about creating an open dialogue between the coach officer and the Special Constable in training,” Chris said. “I make sure the feedback is both positive and constructive, where the new recruits can actively learn and not be afraid to ask questions.” Since becoming a coach officer in April, Chris has focused on preparing his trainee for the role as a Special Constable.

Hardeep, who is in the final stages of his training, shared how this training program compared with other special constable programs across the country.

“I previously worked for the Alberta Corrections and Ontario Corrections, where they both have nine-week training programs before you go out into the field,” Hardeep said. “At Toronto Community Housing, this training program is great for knowledge about social housing, legislation and the use of force.”

This training includes a seven-week program at an institute where you learn more about tenancy legislation, the Criminal Code, legislation for a peace officer, powers of arrest and use-of-force training. Recruits also get hands-on training with a coach officer. “It is on par with any other Special Constable training program in the country,” said Hardeep.

Part of the training shows new recruits how building relationships can help break down barriers between CSU and tenants.

“It is a daily thing with respect,” said Chris, who became a coach officer in April. “It is important to learn how to treat people the way you would want to be treated. It is about being polite and patient. It might seem trivial to you but it is important to put yourself in their shoes.”

Hardeep added that by watching how the special constables continue to have respect, accountability, community collaboration and integrity for tenants through community engagements and programs, “I see first-hand how we are eliminating those barriers and showing a more human side of the CSU.”

From day one, the recruits learn first-hand how to maintain community safety and how to integrate themselves into the community.
“CSU is trying to make a difference in the communities, and sometimes it is difficult,” said Chris. “At the end of the day, tenants appreciate our efforts to connect with the community and build stronger relationships.”

The special constable training will conclude later this month. Hardeep anticipates he will complete his training and be sworn in as a Special Constable and Chris plans to offer continued support to Hardeep and other Special Constables in training every step of the way as CSU and their partners are working together for safer communities.

Hardeep showcases his turban. CSU made accommodations for his traditional headdress.


Related
A day in the life of a community-based special constable
When tragedy strikes Toronto…
VIDEO: ABLE wraps up 25th year celebrations with annual justice career fair
The changing role of an Ontario special constable