“That is a very professional arrest.” 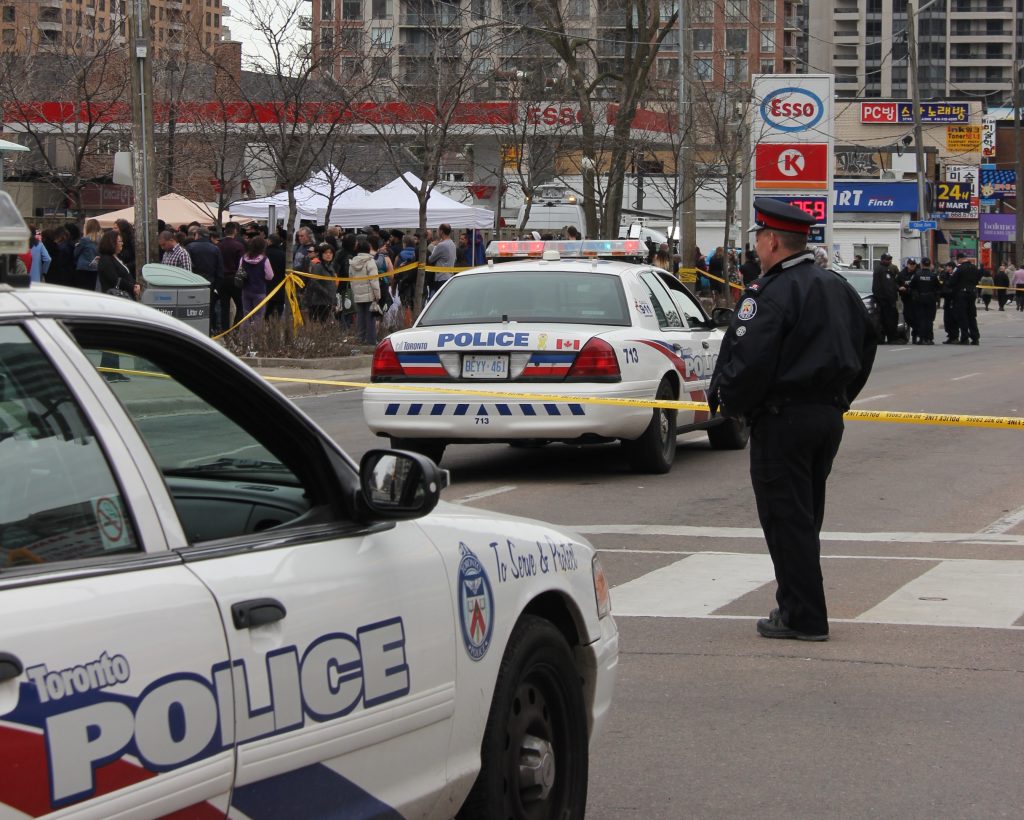 Crowds gather in the background to pay their respects at a memorial set up for the victims on the east side of Finch and Yonge.

This was the first reaction from Jessica Davis, a consultant and former intelligence analyst, as she watched the videos on social media capturing the subduing of the accused in the recent Toronto van attack.

She wasn’t alone in these thoughts — people from all over the world commented on the officer’s composure and swift expertise.
At the same time, she said she believes that is what Canadians expect of their police forces.

Similarly, Const. Ken Lam, the traffic officer who made the arrest, reportedly told colleagues and family, “I was just doing my job.”

Horrific scene
Toronto Police Service (TPS) and other first responders rushed to the scene on the afternoon of April 23, where eyewitnesses reported a white van mowing down pedestrians starting at the Yonge and Finch intersection in the northern part of the city — about a 10-minute drive from the Blue Line office. Ten people were killed and 16 injured.

“I must have seen about five, six people being resuscitated by bystanders and by ambulance drivers,” said Phil Zullo, one of the eyewitness, to Canadian Press. “It was awful. Brutal. Just people everywhere…”

Alek Minassian, 25, of Richmond Hill, Ont., has been charged with 10 counts of first-degree murder and 16 counts of attempted murder. He is due back in court in September.

“This was a horrible, horrific scene,” Mike McCormack, the president of the Toronto Police Association, told Blue Line the day after the attack. “The officers were all amazing. It speaks to what we do in policing. Too often, we have a negative narrative but this shows truly what policing is really about — the commitment of the first responder.”

All first responders to be commended
In one of the videos from the scene posted online, a man stands by a damaged white rental van and points an object at the officer, asking to be killed. The officer refuses to shoot, yelling repeatedly at him to get down and an arrest is later made with the man on the ground.

In a press conference a few days after the event, Toronto Police announced it was Const. Lam with 32 Division who arrested Minassian and that while he is grateful for all the public support, he doesn’t want the hero status. He asked that all first responders who attended to the scene are commended and recognized.

“I can assure you, not a single Toronto Police officer wakes up and says ‘I want to be a hero,’” said Deputy Chief Peter Yuen during the press conference.

Toronto Police Chief Mark Saunders said it was a total of seven minutes from the time the first 911 call came in to the time the arrest was made.

Saunders said Lam told him he “defaulted to his training… and as a result we had a successful outcome.”

McCormack had also spoke with Lam soon after the attack, commenting, “When you’re in confrontation with someone, it’s stressful enough; when you compound that with the horrible, horrible day of having 10 dead, it’s a lot to be a part of. It’s very overwhelming.”

“Impressive” is the word Satyamoorthy Kabilan uses when he describes Lam’s actions.

“The officer used very good judgment,” said Kabilan, the director of national security and strategic foresight at the Conference Board of Canada, in a phone interview with Blue Line. “He should really be commended. It is very difficult in these situations to act so well… when you do not have the certainty the suspect does not have a weapon. This officer paid very close attention to this and didn’t see a gun. He was astute enough to notice this.”

Mubin Shaikh is a counter terrorism expert from Canada who trains police, intelligence and special operations forces around the world on matters related to the jihadist threat. He said, as tragic as the attack was, it gave an opportunity for TPS to really showcase superb policing skill, as learned through training and the examples set by colleagues and superiors.

“The manner in which the citizenry rallied around Const. Lam is a testament — that the goodwill of the public must never be taken for granted,” he said. “And while police responses are usually always criticized by the Monday morning quarterback crew,” this culled a reverberating plethora of police pride, positivity and support.

He said TPS is often asked how it knows its training works.

“Well, folks, it does work because it was exhibited by Officer Lam,” he said. “Every year, we have almost 30,000 people taken into custody and use of force is less than 0.5 per cent. That speaks loudly for our decision making ability, assessing and thinking under stress.”

It is one thing to tell other officers and the public what de-escalation looks like, and quite another to be able to show a real-life, perfect example, he added.

“That’s why it’s remarkable for us, to be able to hold something like this to say, ‘Look at this,’ and we can tell the public, the media — anyone—that our mindset is to de-escalate and have zero harm.”

For Kabilan, this is also a great example of a police officer doing whatever they can without taking out a firearm in an extremely difficult situation.

“However, we need to be careful and understand this is a unique situation and another officer may respond differently, legitimately so, in a different but similar situation,” he noted.

He pointed to the controlled way authorities released information, connected with others, such as Sunnybrook Hospital staff, and didn’t jump to conclusions — police announced a motive would not be discussed, as charges have been laid and the case will go to trial.

In regards to motive, Kabilan also noted that speculation is harmful and applauded Chief Saunders for doing “very well” in that respect and being careful in his wording.

Saunders mentioned there was no national security connection to the incident in a press conference the night the attack occurred.

“The reality is: any large metropolitan area has the potential for this to happen… there is a large concentration of people and you get more trucks going through the city than a small town, for example,” Kabilan went on to state. “The question is what can we do to protect pedestrians and we’re never going to be able to make it a zero-risk situation.”

Detecting and preventing this type of attack is really challenging for law enforcement and security services, Davis agreed.

“We’re not going to be able to prevent these type of incidents 100 per cent but we can learn from them,” she said. “And we do that by reviewing.”

Crowds gather in the background to pay their respects at a memorial set up for the victims on the east side of Finch and Yonge.

Vehicles as weapons
Phil Gurski, president and CEO of Borealis Threat and Risk Consulting, and a former senior strategic analyst at CSIS, also said that unfortunately nothing could be done to mitigate these types of vehicular attacks.

Although cities can install barricades outside public areas such as sports stadiums, parks and city hall, the question is, where do you draw the line, he said.

“If you want to say, ‘Okay, Yonge Street was hit, we’ll just barricade Yonge Street.’ Well, good luck with that, because Yonge Street’s pretty big. So first of all, you couldn’t do it. Second of all, you could try, but it would be incredibly expensive. Thirdly … if you did it, you’d basically be building ‘Fortress Toronto,’ which nobody wants. And fourthly, the bad guys just move onto the next block,” he explained.

Barriers are just one tool anyways, Shaikh added. “An even greater tool, if not the greatest, is how officers respond to such events, and if it is of course easier said than done to bring an offender to justice by arresting and prosecuting them.”

Officers will have to focus on the successful responses to such attacks, Shaikh concluded.

“You don’t know where the threat will come from — even where we are conditioned to anticipate such attacks from specific groups — but the response, is fully in our control.”

Additionally, these attacks, according to Gurski, are “stupid simple.”

“Who’s going to stop you from driving into a crowd? The answer is nobody, unless you’re already under surveillance, under investigation, and even then it’s problematic.”

In this case, he said it will be interesting to discover why the driver chose to attack the city. All TPS can currently say is it apprehended a cell phone and Minassian allegedly posted a cryptic message on Facebook before the attack.

Gurski said the reporting of potential signs of such an attack is paramount.

“All my work on radicalization when I worked for the service [CSIS] indicates quite categorically that there are always signs and that the challenge is not that there aren’t signs, but …what do you do about them?” he asked. “You’ve got to call somebody.”

Toronto Strong
Going forward, TPS will “look at lessons learned, updating the public in a timely fashion — what we can do better,” Saunders said.

Through the horrific event, “I’ve have the opportunity to be surrounded by some of the best investigators, the most knowledgeable people in counter terrorism and we were able to break down things very minutely and I’ve got to tell you, on the world scale, we are ahead…” he added during his speech at the Toronto Crime Stoppers Chief of Police Dinner in May. “The fact that we utilized officers that were issuing pamphlets to help people heal from the crimes they witnessed… the fact that we brought in therapy dogs in that particular neighbourhood — they were all things the rest of the world looked at.”

The tragedy has indeed exacted “a toll that will last forever,” Saunders said, but in response, it is the ability to “train people to do the right things” that makes a difference.