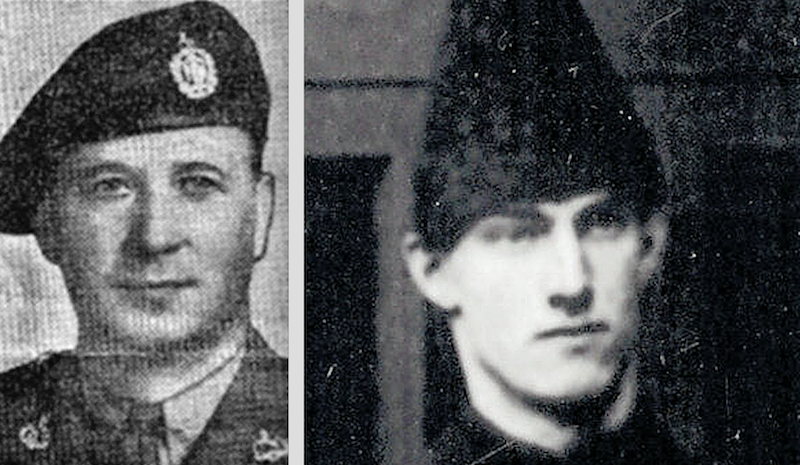 During wartime, many police officers enlist to serve their country. In commemoration of the 75th anniversary of the D-Day invasion of Nazi-occupied Europe, we remember two such officers who made the ultimate sacrifice.

Courtney was quickly promoted to Lance Sergeant and posted to No. 84 Company, RCASC—a part of the 2nd Canadian Tank Brigade, which would provide logistical support to tanks in battle.

His company moved to England in the summer of 1943 where they trained for the D-Day invasion. On June 3, 1944, to avoid enemy detection, they sailed down the Thames River from London aboard the SS Sambut. On June 6, 1944, around noon, they arrived off the coast of Dover, to prepare for their crossing of the English Channel, heading towards Normandy.

German coastal artillery in Calais was bombarding Allied convoys along the English coast and at 12:15 p.m. the side of Courtney’s ship was hit with 15-inch shells, wounding him severely in the abdomen. He received prompt medical attention, but at 12:45 p.m., an ammunition cache in the burning ship’s hold exploded and everyone abandoned ship. Courtney was helped to the life rafts but eventually succumbed to his wounds and slipped into the English Channel.

He is commemorated at the Bayeux Memorial in Normandy, France.

Harry Lee Smuck
On Nov. 11, 1939, shortly after war was declared, Smuck, a 41-year-old patrol sergeant with 13-years’ service with the Toronto Police Departmen, enlisted with the First Hussars, an armoured unit in London, Ont. He was made an acting sergeant and quickly promoted several times. By 1940 he was offered a commission as a second lieutenant.

In November 1941, Smuck and his men landed in England and were stationed at Aldershot. They received newer M4 Sherman and Sherman Firefly tanks in December 1943 and began their training for D-Day.

On June 6, 1944, the now-Captain Smuck and his armoured unit successfully landed on Juno Beach and despite heaving fighting, advanced inland further than any other unit that day.

At 1 p.m. on June 11, 1944, Smuck’s unit set off to help liberate the French town of Le Mesnil-Patry. They were met with heavy mortar and machine gun fire from the village. While advancing through the countryside, Smuck’s tank squadron began to see 7.5-cm, anti-tank gun rounds and eventually rounds from powerful German Panzer IV tanks.

Smuck’s tank was disabled and he and his crew – some of them wounded – escaped and attempted to return to their lines. Smuck and one of his men were eventually captured and marched to a secluded area with other Canadian prisoners of war where they were lined-up, shot and buried in a shallow mass grave. Smuck was eventually re-interred and now lies at the Ryes War Cemetery in Bazenville, France.

The circumstances of his death were investigated and publicized during the trial of Nazi General Kurt Meyer.

As we reflect on the 75th anniversary of the D-Day invasion, we salute all the men and women who served and continue to put their lives on the line. We will remember you.

Matthew Scarlino is a Toronto Police officer, military veteran and amateur historian. He can be reached at: khakiandblue@protonmail.com.