Electronic notetaking and a growing public safety broad band, suicide by cop case studies, realigning hormonal pathways for better functioning as a shiftworker, and a look at partners who are data mining to help law enforcement bring down traffickers — all this and more was covered at Blue Line Expo 2019 on April 16 in Mississauga, Ont. 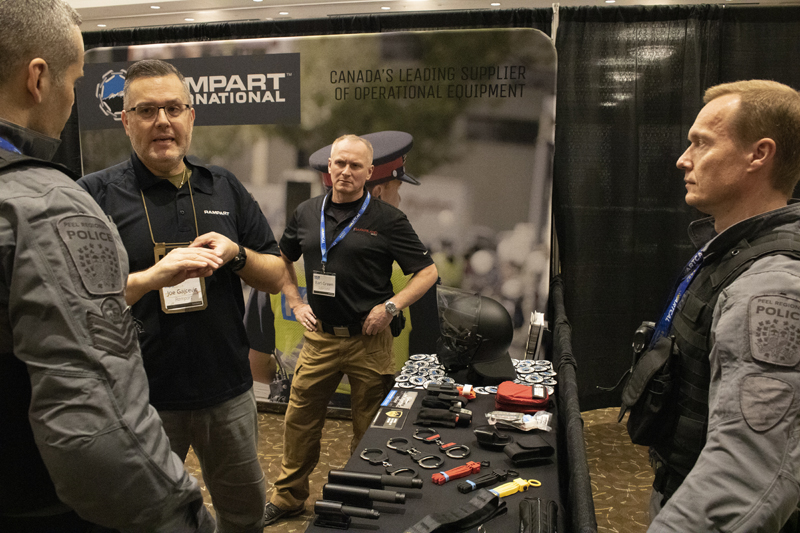 Nearly 300 attendees perused through the 50 vendor booths set up to show off the latest in technology, services and products from the law enforcement, corrections and security industries. This included unmanned workhorses for emergency response personnel, an “end-to-end” electronic police record check system, body worn cameras, the Bungee Weapon Retention System, PRE Labs’ Quickloc magnetic side attachment, law enforcement vehicles and so much more.

There was quite a lot of interest in The Saint from Expo’s gold sponsor, Off The X. The Saint is a “compact, lightweight, rapidly deployable and remotely operable non-explosive tool which can breach nearly any inward- and outward-opening door,” according to the company.

Plus, Leading Edge Tactical Solutions captured attention with their cool blue smoke demo in the parking lot and for those with an eye for collecting, the Canadian Police Insignia Collectors Association was on hand with a slew of gorgeous badges and some fascinating historical memorabilia.

The Foundation for the Responsible Administration of Emergency Medicines also set up at Blue Line Expo, promoting the education of the signs and symptoms of an opioid overdose, and the administration of naloxone as well as EpiPens.

Over on the conference side of things, Halton Regional Police Deputy Chief Nishan Duraiappah discussed bringing data to the frontline via the service’s public safety broad band network with Motorola and plans for its growth.

“We want to shift the paradigm of the computer in the car,” Duraiappah started saying, continuing on to talk about dual sim cards for smart phones that double as a portable radio. He noted the bottom line is that key deadlines for Next Generation 911 data streams to go live in Canada are fast approaching. How is your agency ready?

Dr. Peter Collins, the Operational Forensic Psychiatrist with the Ontario Provincial Police’s Criminal Behaviour Analysis Unit, described more about those “looking for the macho way to die” and cited some suicide by cop case studies.

Ontario’s solicitor general, Sylvia Jones, honoured Blue Line with a quick tour and announced an update to the Mandatory Blood Testing Act in regards to timelines and an increase in penalties for non-compliance. She also gave a nod to the Comprehensive Ontario Police Services Act, 2019, “a plan that protects what matters most, and few things matter more than the security of our people,” and mentioned the importance of mental health resources for law enforcement officers.

“I don’t want a single police officer to think they have to suffer in silence,” she told the lunchtime crowd.

“And if you don’t think organ trafficking is happening here in Canada, it is,” Tramontozzi said. In fact, according to the analytics, a rise in this market is predicted, he noted.

“We can’t work in our little silos anymore,” Tramontozzi added.

Stay tuned for a video from the event, more photos in the May print issue and check out the hashtag #BlueLineExpo19 on social media for more posts.

Find more photos from the show below. See yourself? Email rfrancoeur@annexbusinessmedia.com for a copy.