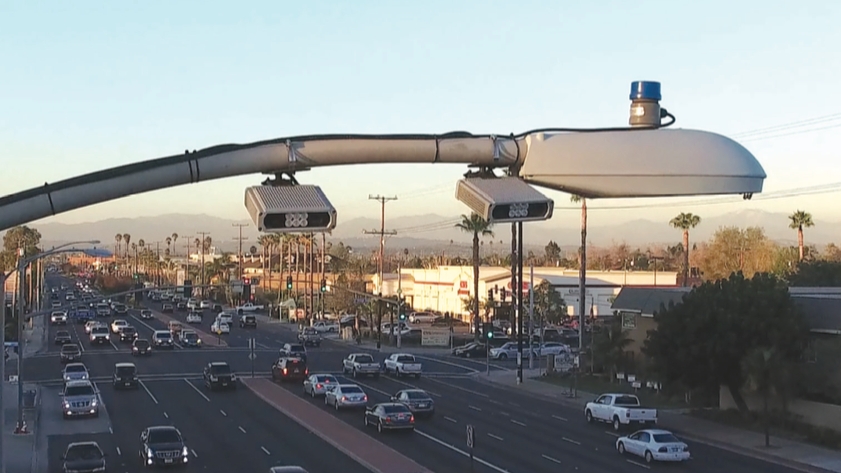 Although Robert Frost meant for that line to be ironic, in the right context, it should also be taken literally — like when it comes to ways to aid law enforcement agencies and safeguard communities.

Technology is increasingly being used as a force multiplier to help law enforcement agencies protect and serve. One way agencies are turning technology into a crime-fighting tool is through installing a “virtual fence” around a perimeter (city limits, a parking lot, etc.) with a network of license plate reader (LPR) cameras.

These virtual fences are installed in municipalities across the country and serve not only as a way to surveil the average citizen, but also to give law enforcement officials a way to multiply their effectiveness and keep neighbourhoods safer, especially from “outside-in crime,” where criminal elements cross city or county lines to commit crimes outside of where the perpetuators reside.
Case in point: La Verne, Calif.

La Verne, Calif., is a small community with a population of around 30,000 citizens.

“La Verne is not a big city by any stretch of the imagination, but because we are in Los Angeles County, we see our fair share of criminals, either passing through our community, or specifically coming into our community to perpetrate crimes,” said Sgt. Chris Fenner of the La Verne Police Department. “We’ve seen otherwise peaceful communities turned upside-down by crime. When that happens, it impacts everything — property values, quality of life, business and much more. We wanted to take a very proactive measure to reduce the crime that is taking place and prevent future crimes from ever occurring.”

The police department looked at its options and learned about the concept of a virtual fence.

“We saw other neighbouring communities create a virtual fence using LPR cameras and heard about the results they were generating,” Fenner said.

The La Verne Police Department installed a network of 21 fixed cameras, including hardware (cameras, communication boxes, brackets and cabling); services (site survey, commissioning and training); and storage of all plate detections and analytics for investigative use. Fixed LPR cameras were installed at key entries and exits, called choke points. The cameras detect all vehicles entering and exiting through the choke points, capturing the plate number and image, as well as the time, date and location. A robust back-end allows for investigative analytics and real-time alerting — no IT integration required.

Fenner said the virtual fence in La Verne has had a significant impact: The police department has identified and stopped dozens of occupied stolen vehicles entering La Verne, compared with the one or two stolen recoveries annually prior to having the fixed cameras.

“Stolen vehicles are often used to perpetrate other crimes and I can say without a doubt that we prevented crimes from taking place by stopping these vehicles,” Fenner said. “Some of these vehicles were entering residential areas at one or two in the morning with loaded firearms and burglary tools. As a result of these stops, we have also apprehended individuals wanted for more serious crimes, such as kidnapping and assault with a deadly weapon.”

In addition to a noticeable impact on the department’s ability to protect neighbourhoods from known vehicles of interest, the solution has also helped to investigate and close cases more rapidly.

“We have solved numerous residential and commercial burglary cases using vehicle descriptions such as year, make and model, or a partial plate, coupled with the location,” Fenner said. “We have located at least three domestic violence suspects using historical data to understand where the suspects’ vehicles have previously been seen.”

La Verne’s installation shows how a fixed camera solution effectively wraps a virtual fence around a geographic area of responsibility to detect when suspicious vehicles enter the area, and boost a law enforcement agency’s investigative strategies to develop leads and solve cases.

“The system has been a tremendous force multiplier for our department,” Fenner said, “and is helping us prevent as well as reduce crime.”

Vulnerable targets
Every day, law enforcement agencies are being asked to do more with less, to be prepared and readily produce investigative leads. Yet threats to community safety continue to grow, from the potential for lone-wolf shooters to crime pouring in from neighbouring cities. Areas like universities, schools, business campuses, airports or arenas — just to name a few — are self-contained communities that are increasingly targeted by criminals and terrorists.

It’s up to agencies to protect their areas of geographic responsibility with any force multipliers they have access to. The law enforcement agencies that will win the battle are the ones that will know when a wanted vehicle enters the community — a vehicle that may be carrying a person considered dangerous.

These agencies will be able to expand their reach and fight crime without stretching their workforces. They will also have the tools at hand to develop investigative leads and close cases faster. Sometimes good fences do make good neighbors – and a virtual fence helps safeguard neighbourhoods and communities across the globe.

After 21 years at the New York Police Department — first patrolling the streets and subways of New York City and later as lieutenant-commander of the NYPD Cold Case Squad — I can attest to the need for law enforcement to use every available tool to protect communities and citizens. Forward-thinking law enforcement agencies see the virtual fence solution and advanced data analysis as proactive steps toward safety and crime prevention — as a force multiplier, a way to do more with less. And isn’t that what agencies are called to do every day?

Tom Joyce is the vice-president of Vigilant Solutions and a retired member of the NYPD in the rank of Lieutenant-Commander of Detectives. He can be reached at Tom.Joyce@vigilantsolutions.com.
Print this page