In June 2011, a robbery occurred at Carleton University in Ottawa, Ont., resulting in the loss of thousands of dollars. Department of University Safety (DUS) officers used closed caption television video (CCTV) to locate and follow the suspect vehicle as it left campus. However, they were unable to obtain a clear licence plate, so they couldn’t identify the car or the driver. Follow-up investigation led to the identification, arrest and subsequent convictions of the suspects — but not until a month later. Simply having a licence plate number would have saved a lot of time and effort. This incident resulted in a review of Carleton’s CCTV deployment strategis. 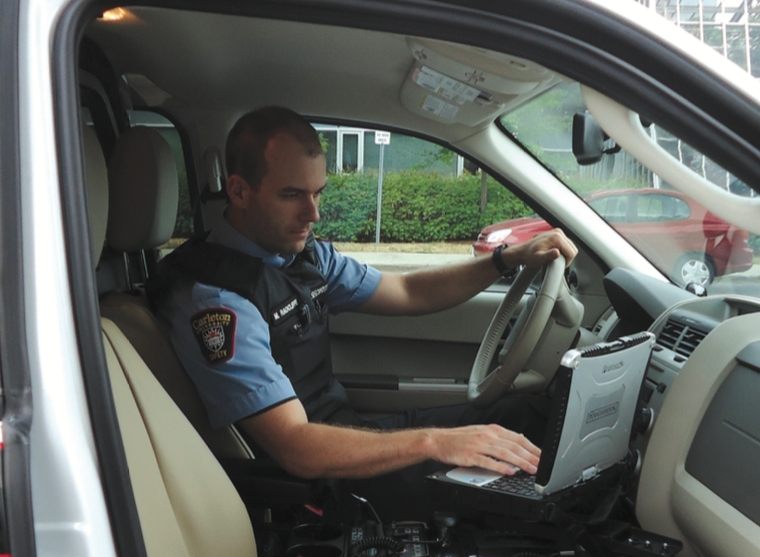 Given the evolving need for investigative tools for patrol officers and parking enforcement, Carleton is now using Automated Licence Plate Recognition (ALPR) cameras to augment its 1,000-camera CCTV system. ALPR cameras have been installed across campus in key locations and, later this year, at the entrances to campus. This will help officers quickly and accurately identify and record the date, time and licence plate of every vehicle entering and exiting campus.

Campus parking lots are managed using licence plate recognition software (Pay by Plate) where the licence plate is the parking permit. This has simplified a complicated parking system, which no longer requires physical permits or displayed receipts. With the addition of ALPR camera systems on our parking and patrol vehicles, officers can now automatically scan to identify illegal parked vehicles and flag them. To date, three campus parking garages are equipped with ALPR cameras for real-time reports of occupancy and non-payment.

“The ALPR software employed in the parking garages is analytic. It provides a proactive report to parking enforcement officers, which allows them to plan their patrols based on priority instead of just patrolling blindly,” says Chris Moy, DUS assistant director. “They can engage in strategic parking enforcement. As a result, it has been a great return on investment.”

What does this mean for advancesin investigations?
If an incident occurs on campus involving a vehicle and a make, model, direction of travel, or partial plate is provided, the investigator can access the ALPR data with the information they have and obtain the associated plate number. This data can be also used to identify the owner through a CPIC (Canadian Police Information Centre) check with the Ottawa Police Service (OPS) or, alternatively, for the OPS to then follow up. In addition, DUS will have the capacity to provide additional assistance to OPS investigations by running or flagging plates of interest through this system upon request.

DUS has the authority to ban individuals and vehicles under the Trespass to Property Act. With the data provided from ALPR cameras, officers can enter a list of banned vehicles into the system so DUS is immediately notified whenever a vehicle trespasses. This strengthens officers’ situational awareness of known threats coming onto campus and will decrease response times.

From a traffic management perspective, this new technology will allow the department to measure the traffic flow and assess data to determine peak times by calculating how many vehicles are on campus at any given time and the occupancy of the parking garages.

“ALPR opens the doors for us to manage traffic, parking and investigations based on real-time data,” Moy says. “All patrol and response efforts can be focused, co-ordinated and strategic.”

Sgt. Brittany Basten is the community liaison officer with the Department of University Safety at Carleton University. Email university—safety@carleton.ca for more information.
Print this page