OPP Sergeant Mark Radke is about to enter a new phase of life: retirement. 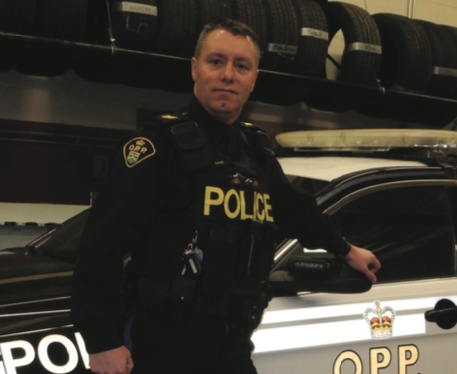 Come May 2018, OPP Sergeant Mark Radke will celebrate 30 years with the Ontario Provincial Police. However, Radke’s retirement plans do not include sitting idle. Instead, he is on a mission to provide children in Nicaragua access to education by building a classroom in an impoverished community with SchoolBOX, a non-profit organization that provides educational resources to the people of Nicaragua.

Hailing from Peterborough, Ont., Radke spent his career serving in five OPP detachments: Hawksbury, Kanata, Goulbourn, Kemptville and Ottawa. He currently serves at the Ottawa detachment as a supervisor of nine platoon officers. After three decades  of service with the provincial police force, Radke will undoubtedly miss the friendships and camaraderie developed with fellow officers on the job. However, he is excited about the prospect of using his retirement to make a difference in the developing world.

“As I’ve gotten older, I have become more involved in volunteer work,” Radke says, adding that since 2015, he has volunteered with the Canadian Cancer Society’s Wheels of Hope program.

As a cancer survivor himself, Radke now drives cancer patients to and from their cancer treatments. He is also a team organizer in Relay for Life. Radke says these initial forays into volunteerism are what led him to look for other opportunities to make a difference post-retirement.

“I have always been drawn towards helping underprivileged children in some way,” Radke says. “I wanted to build a school or hospital, something permanent that would be valuable to a community,  even beyond my lifetime. As time went on, I began leaning towards building a school and needed to find an organization I could partner with. I came across SchoolBOX’s website, and was captivated by the story of their humble beginnings, their lean operation costs, their local Nicaraguan team, and the massive impact they’ve had empowering kids to go to school.”

SchoolBOX began in 2006, when founder Tom Affleck gave two girls a notebook and a pencil in rural Nicaragua. Immediately, their father’s face lit up as he exclaimed, “Now my children will be able to go to school.” In that moment, Affleck realized simple tools that we often take for granted had the potential to empower children to get an education. Based on that small act, SchoolBOX was born.

Since those humble beginnings, SchoolBOX has constructed 84 classrooms, 54 libraries, and 50 washrooms. In addition to its infrastructure programs, SchoolBOX equips over 18,000 children in 97 communities in Nicaragua with the school supplies they need to get a basic education on an annual basis.

Just $5 is all that it costs to provide school supplies to one child for an entire year. In Nicaragua, the second poorest country in the Western Hemisphere after Haiti, the elementary school graduation rate is just 56 percent. SchoolBOX’s programs are designed to encourage children to go to school, and stay in school year after year.

Radke believes that “education is a priority for lifting yourself out of poverty and empowering yourself.” He looks forward to breaking ground on his classroom in late 2018, and bringing a group of his family and friends to Nicaragua to take part in the build. Most of all, he says, “I want to be there to see the finished classroom and witness the smiles on the kids’ faces when they see their new school for the first time.”

Related
“Not a cop show:” Beyond the Badge looks at human element in policing
Emergency information at your fingertips
The professionalization of police training in Canada
OPP Det.-Sgt. Caren Ashmore leaves Canadian footprint in Palestine