Features
Emergency information at your fingertips

Tim Henry was the manager for an 18-storey multi-tenant commercial high-rise that caught fire after business hours in downtown Ottawa, Ont. Firefighters arrived to black smoke billowing from the lobby. They knew little about the building, where the fire had originated or what was the safest way in. 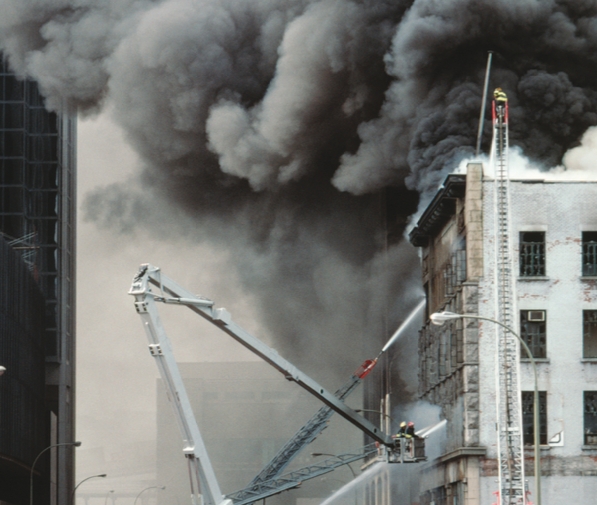 Henry, who was home at the time, had a brainwave. He logged into his company’s closed-circuit camera system and could see the area engulfed in flames and a safe route into the building. He could view the building’s electrical vault and see that it wasn’t at risk. He called his on-scene building operator, who relayed the information to the fire captain. Within minutes, the firefighters had safely entered the premises, extinguished the flames and saved the building.

Henry relayed his story of near-catastrophe to his friend Mark Macy, a veteran of commercial security, who was transfixed. Macy knew when firefighters show up at the scene of an emergency they are effectively blind. And the people who know most —  the property managers and the building owners — usually aren’t in contact with first responders. In the time it takes to assess the situation, lives are often lost, buildings destroyed and millions of dollars may evaporate.

The same problems exist for paramedics and police. In an era where emergencies such as school shootings and terrorist attacks are increasingly commonplace, the need for an intelligent, informed response is more urgent than ever.

Macy knew that his friend’s happy ending was an anomaly. What if Henry had been on vacation or otherwise unavailable? What if he hadn’t had the presence of mind to log into his closed-circuit camera network? Macy wanted to provide a way for first responders to access a building’s video camera feed directly before arriving on scene.

He created a multi-pronged solution: a secure database containing vital information about commercial buildings, accessible by police and other first responders in the event of an emergency. It allows police to tap client video cameras in the vicinity of an emergency and has a secure broadcast channel, enabling police to communicate pertinent information directly to properties during an emergency. The entire suite acts as a “virtual command centre” and is accessible on any device: iPhone, Android, tablet, desktop or in-car computer. It’s called the Emergency Response Portal, or ERP.

In 2013, when Macy devoted himself full time to developing ERP, police chiefs, security experts and first responders told him his concept was vital. He learned that both the Toronto and Montreal police services had tried to develop such a system but had failed. There was simply too much data to collect and keep current and their approach conflicted with some privacy regulations.

Macy’s solution was a “distributed managed database.” ERP would securely host the data on behalf of the property, who would own and be responsible for keeping the information current.

To address privacy concerns, the system instantly notifies the owners and managers of the property whenever their information was accessed by emergency services.

ERP leverages ONVIF, the inter-operable standard platform upon which all video cameras now run. As a result, it can tap into the feed of any camera, regardless of manufacture, but not archived data.

Initially, executives at major international property management companies had concerns about security. “If you think we’re going to give you access to our cameras, you’re out of your mind,” one executive reportedly said. “There’s no way we’re going to make it easier for a hacker to put our surveillance footage on YouTube!”

To address the issue, Macy drew inspiration from a bank machine. His system would work like an ATM, where users would connect to his company’s data centre in the same safe, secure way that an ATM connects to a bank — directly, not through the Internet.

In 2016, Macy and his team presented their concept to privacy officials, who determined that the product presented no issues to Canadians’ privacy. He toured North America, meeting with first responders and absorbed their feedback, tweaking the system as he went.
In 2016, the Toronto Police Service came on board as a user of ERP in their central operations centre, later followed by Ottawa Police, Halton Regional Police, Niagara Regional Police and the Ontario Provincial Police.

The system’s benefits proved themselves quickly. When a fire broke out in the onsite daycare facility of a government building in Toronto, a staff member called 911. The building was an ERP client, so the dispatcher accessed the building’s data and saw that a small OPP detachment was located in the same building. The dispatcher notified the detachment, which was unaware of the situation but was able to respond to the call, long before the firefighters arrived on scene. In those crucial minutes, the daycare was evacuated, the fire was extinguished and no one was hurt.

ERP’s broadcast function proved to be a valuable tool as well. Responding to a mother’s frantic 911 call that her car had been stolen with her daughter in the back seat, the police used ERP’s broadcast function to alert clients in the area of the situation. Well in advance of the official Amber Alert, the police communicated a custom message, indicating the make and year of the car and the nature of the situation. Within minutes, the news was trending on Twitter and was picked up by news agencies. A few hours later, the car was found abandoned in a parking lot, the child safe.

ERP is fully operational and is now expanding. Macy notes he has an accomplished team and expanding roster of clients with a diverse mix of facilities, including government buildings, schools, sports complexes, places of worship, high-tech office towers and more.