In honour of National Peacekeepers’ Day earlier this year, Blue Line spoke with Det.-Sgt. Caren Ashmore of the Ontario Provincial Police’s West Region Crime Unit in Wellington County. Ashmore spent 16 months in Ramallah, Palestine, as part of the European Union Co-ordinating for Palestine Police Support. Deployed as a police advisor for accountability, she was appointed acting deputy head of the Police Advisory Section six months in. 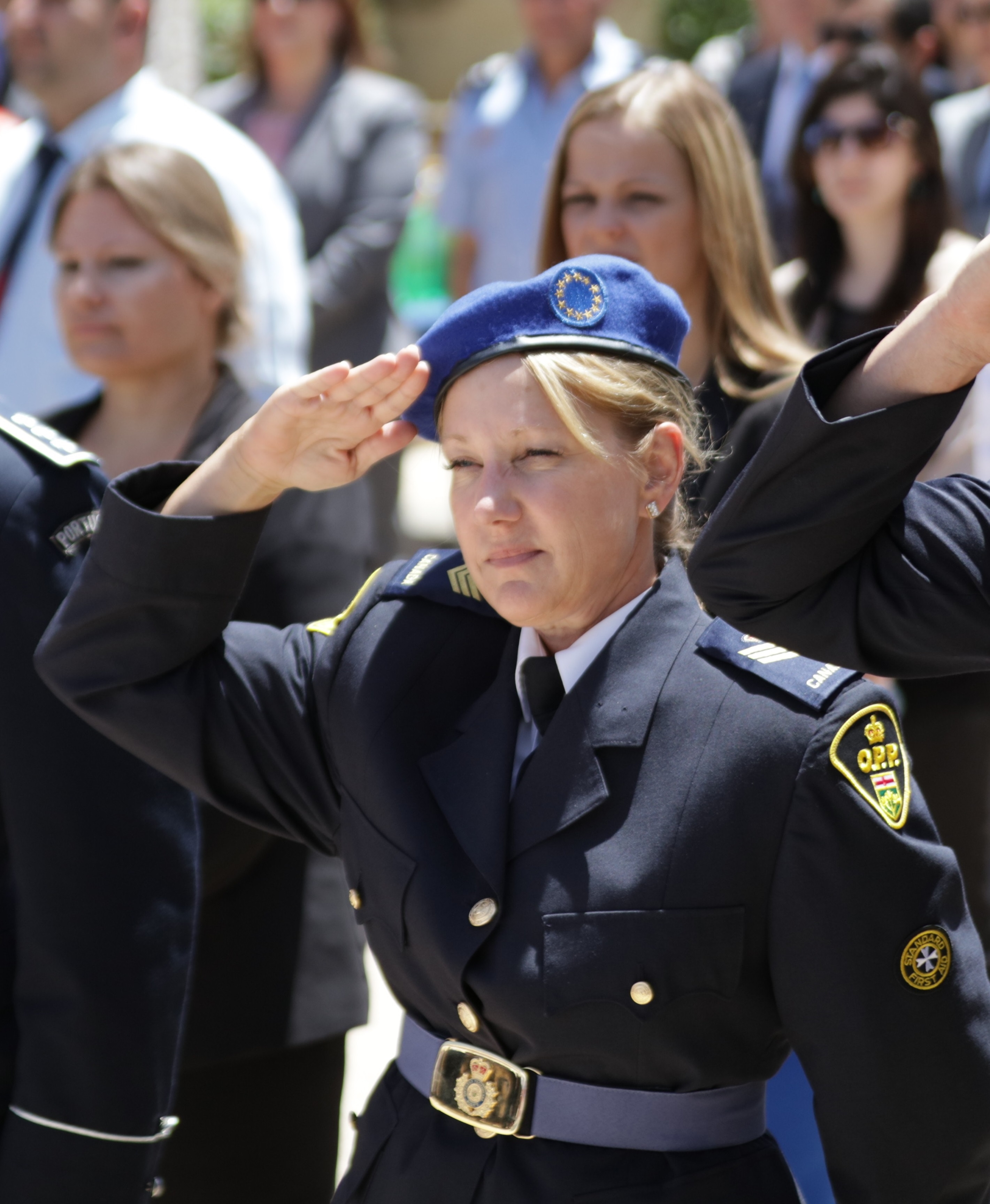 Q: How did your career in law enforcement begin?
I actually started my career as a radio communications operator in 1991 in Thunder Bay for the Ontario Provincial Police as a civilian. I truly felt like I wanted to do more but at the time I had small children; it wasn’t until around 2000/2001 when I received my badge with the OPP.

I was a uniform officer in the Nipigon Detachment and a short time after that I became a regional abuse issues co-ordinator for the northwest region. I did this for a number of years, dealing with domestics and working with stakeholders and the communities. That was very challenging.

After that I added a detective sergeant component to my portfolio, at which time I was responsible for the investigation and supervision of major crimes within my region. This afforded me the opportunity to fly into remote reserves. I really enjoyed working within these communities and the investigations, the team atmosphere.

I did a summer deployment in Pikangikum, Ont., as a supervisor. We would fly in for two weeks and then fly out for two weeks so if we had to transfer a prisoner, we would have to do it by boat… It’s a different type of policing you have to do in a fly-in community and I truly enjoyed the challenge.

Q: How did you find your way to this specific deployment?
The OPP advertises internally for a pool of applicants and you are selected through the RCMP for international deployment. So you don’t really know where you’ll be going — you can kind of pick locations on some of the applications, but you don’t know when they will come. In my case, after I applied, I had got called for an interview with the EU Palestine mission, but I had also been receiving a large number of correspondences from EU Ukraine through the OPP.

Q: What did you expect and what kind of surprises met you in Ramallah?
Having travelled to many remote First Nations communities, I knew your expectations are never the reality because every place is quite different. I read a little bit and had spoken with another Canadian member that was there, but I think I was better off not having expectations; it was such an opportunity, I wanted to take it all in.

I knew I’d be living in Jerusalem and our office was 45 minutes away, in the West Bank. You read about the conflict and the walls and that type of thing but you cannot visualize it, and what the reality is for some people, until you’re there. For example, some Palestinians will never see the sea, even though it’s so close, being that they can’t obtain the visas to get through.

A lot of the settlements are intertwined in some parts of Israel and yet they are still quite segregated in terms of what they can do. I wasn’t expecting that type of thing.

Driving was definitely a surprise; it’s a big adventure. There’s a lot of traffic and the rules are very different — you didn’t see baby car seats for example in the West Bank.

You’re also always in tune to safety because it is an active war area so we always maintained a situational awareness. Of course, we had a lot of turmoil when I was there in terms of moving the American embassy to Jerusalem.

We drove diplomatic vehicles and sometimes we would be driving home — I lived on the edge of Mea She’arim — and there would be overturned garbage containers on fire, stone throwing.

The biggest surprise was the vulnerability of the people behind the walls. We had to go to a meeting in the different part of the West Bank, not Ramallah, and we were called by security because the checkpoint we were going to use was closed. We were in an armoured car with armoured equipment and it took us another four hours to get out of the West Bank because if they close one checkpoint, they can close the next one by the time you get there, too. You really feel that vulnerability of being behind a wall and it’s not easy to go in and out.

Q: What was a typical day like?
We would convoy to the office from our homes in Jerusalem with security and radios in our vehicles. We had to live in Jerusalem to have access to various exits, such as flying out of Tel Aviv or Jordan; security had to check our homes and we could only live in certain areas.

Some days we couldn’t go into the office because of heightened security.

I worked in a very open space where we had 28 advisors, all international. I was the only Canadian. There was one other female there for my first eight weeks, but other than that, I was the only female police officer in our section. And I was the only native speaking English speaker.

Our section was accountability so one of the first things I did when I got there was help complete code of conduct training for officers within the Palestinian Civil Police. That was really rewarding because we were able to go to all the different offices. This was very similar to going to some remote First Nations offices that were not in such a great state.

Whenever we’d go to a meeting, we’d brief with the chief of that district and of course we’d have traditional coffee and tea. He would tell us about his district. They are very proud people, but just absolutely wonderful. If we were doing code of conduct training, we’d discuss how it would go forward, as we’d set it up to be delivered by one of their trainers. They wanted to hear directly from us how we do it back where we live. They were super appreciative and very respectful.

We started tracking how many males and females were at the training — the Palestinian Civil Police is predominantly males. It was very rare to see another female there… They are working on trying to increase their numbers.

Essentially my role was to advise them, more so on a strategic level.

Q: What are you most proud of in regards to your police advisor accomplishments?
My mission was extended three months because I became responsible for the mentorship for the Palestinian Civil Police Research, Planning and Development Administration. What we did then was the development and completion of the Palestinian Civil Police Strategic Plan, which was for 2017-2022. When I came into it, a mentor had been in place there doing the work for eight months. I was pulled in because he was leaving, but we were already behind.

Part of our mission mandate, which ended in June 2018, was to ensure that the strategic plan was completed because it was in line with the security sector plan, which governs all Palestinian states. So it was a really important document to finish.

As such, my focus shifted from the accountability section but I was happy how the code of conduct training had gone and proud that we had opened the first, walk-in public complaint office in Ramallah. That allowed citizens of the West Bank to go in if they had issues with officers and file complaints that would be reviewed by the accountability department, depending on the issue.

I also ended up becoming the acting deputy head of the Police Advisory Section, moving into a senior management and leadership role. Managing international and national advisors as well as civilian members was extremely rewarding and challenging of course, too.

I was the first OPP member to ever have a mission extended and I was very proud I was able to finish the strategic plan and leave that Canadian footprint there by transferring my knowledge and skills through mentoring, advising and giving [the Palestinian Civil Police] a platform to move forward with.

Q: What is your advice to other law enforcement officers interested in similar peacekeeping work?
Three things: Expect the unexpected. Be patient and just be open — enjoy the once-in-a-lifetime experience.