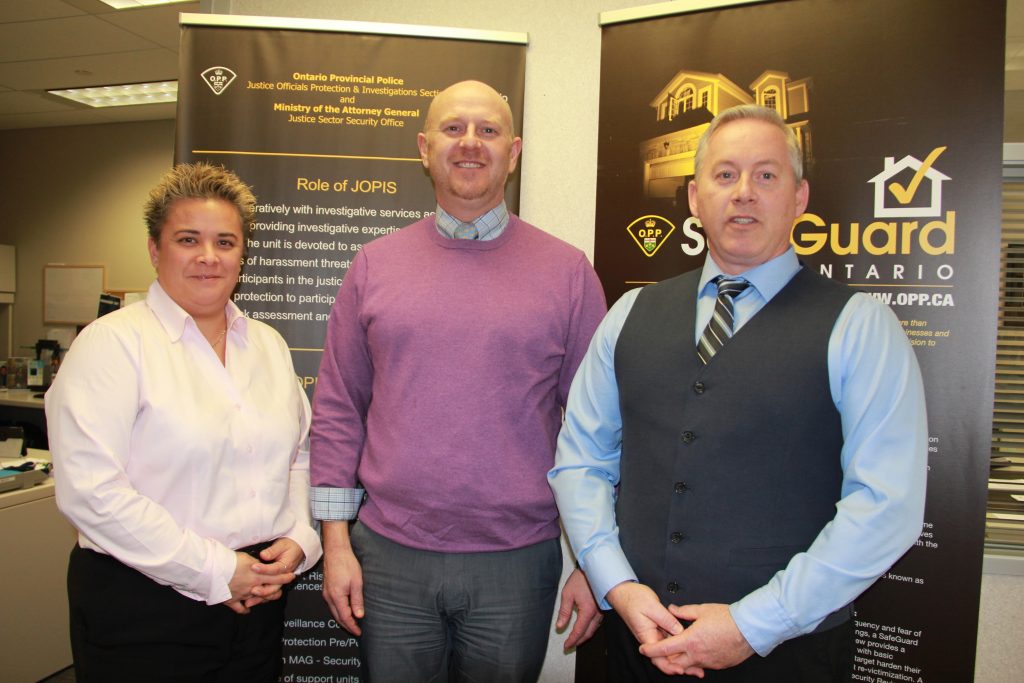 Q: Why was PSN created?
Rob: The OPP’s SAU, under the Security Bureau, was established in 2007 to provide physical security threat risk assessments for all OPP facilities. We recognized that, as commonly practiced in the private sector, we did not have a network of security representatives from Ontario police services collaborating on security threats, vulnerabilities and practiced solutions. This group seeks to fill that void. It’s been an open forum with Patrick and Laura driving it. We’re legislated to ensure the safety of our employees and the purpose of the group is to expand on ways to do this.

Q: What is PSN’s mandate?
Patrick: It’s about our police services coming together to collaborate on how to proactively protect all assets from security threats and vulnerabilities. The objective is to act in an advisory capacity to the members’ senior command for their security planning.

Q: What has PSN accomplished so far?
Patrick: In May 2017, we hosted our first meeting to create a direction. The OPP, York, Durham, Peel and Niagara police services attended. Quite a few action items came out of that meeting, for example: the RCMP has a security zone standard we’re looking at incorporating (more on this at goo.gl/ditYuz). Here’s a standard that exists for policing, yet is not being utilized widely.
The second meeting in November selected an official name and outlined the mandate.

Q: What were some of the changes between the meetings?
Laura: Halton and Waterloo regional police services came on board for the November meeting. Other police services are also considering joining. We’re in the process of providing more information to them.

Rob: In the short term, the membership in the group is driving the focus of the meetings. We ask, “What are the issues?” Across all services, we hear concerns regarding Ministry of Labour issues, insider threats and challenges with security clearances.

Q: What other topics of interest came up?
Patrick: We introduced the SANS Institute report on insider threats in law enforcement, (goo.gl/vR8FWh) and we touched on updates to security clearance.

Q: How has Patrick’s background in private security helped?
Rob: For years, we’ve had police officers who are also ASIS International (American Society for Industrial Security) accredited professionals in the SAU.

Laura then brought forth the idea to go outside the police agency and look for security professionals because they are the experts in security. We did just that. We brought Patrick in specifically to assess the SAU’s provincial physical security threat risk assessment program due to his knowledge base and his corporate security experience. He is wrapping that up now.

During that project, Patrick saw some gaps in what we were doing, such as our lack of conversation with some of the other police services about other physical security challenges.

Patrick: I reached out to a colleague at York Regional Police and we came up with this idea of having all interested police services at one table to talk about different risks and challenges. I come from the private sector and whether you’re in security management for a sports arena or a hospital, we all do the same thing so we put aside competitive differences and everyone sits down to share war stories, what works and what doesn’t, for the betterment of the industry.

Q: Is anyone else doing something like this?
Laura: As far as we know there are no other groups like this in Canada — other than within the Royal Canadian Mounted Police. They conduct ad hoc meetings here and there, but as far as a group dedicated to police physical security and striving to be the voice of change, we haven’t come across anything similar.

Q: What does security currently look like for many police agencies? Who handles it?
Rob: The OPP has had a dedicated team looking at physical security for some time. The SAU’s Justice Officials Protection & Investigations Section (JOPIS) focuses on threats to justice officials.

We’re now starting to see agencies such as Peel and Ottawa that have dedicated members for physical security, but not a team.

Patrick: Yes, Ottawa Police Service has hired a full-time security manager and Peel Regional Police has a staff sergeant dedicated to anything physical security related, also full time. The others are still using their facilities departments for security.

Q: What kind of data do we have right now on physical security in law enforcement?
Rob: Specific security data was difficult to extract from the existing databases, but Laura was able to put a process in place to have security incidents directly reported to our unit.

It’s too early in the game for any actual numbers from PSN, but it’s one of the reasons we’re sitting at the table. If someone advises of a significant security breach or incident, there is a record of it and the data is tracked.

Patrick: An action item from the group is to report back any stats or figures so we can incorporate those into our next meeting.

Q: What is next for PSN?
Patrick: We will meet again later this year and propose selecting chairs and co-chairs. It’s so fresh right now. We need to continue to leverage our partners to get the word out, as with growth comes more ideas, better ideas. Why restrict this to Ontario? From Newfoundland to B.C., this is for the greater good of Canadian police and serves to ensure the protection of the policing function. Eventually, I could see this turning into a daylong conference with breakout sessions.

Q: What is an ideal outcome from PSN?
Patrick: We want a standard within all other agencies and to create a security function that is a top priority as opposed to being the responsibility of facilities or the building caretaker.

Rob: Within the OPP, our Security Bureau command members meet regularly with the Commissioner’s Committee. We’re hoping for a voice outside of the OPP. I’d like to see this group get to the point where we have a voice at the OACP (Ontario Association for Chiefs of Police); where we can present common themes, trends and threats across the province. We need the OACP, the FNCPA (First Nations Chiefs of Police Association) and the like on board.

At the end of the day, if nothing else happened out of this group other than every service has a dedicated security professional, then that’s a success.