I’ve been watching Stranger Things and the German science fiction/horror series Dark on Netflix over the past few months and thoroughly enjoying whenever one of the retro police cars or trucks whizzes (or putts, as with that circa 1953 fir green Volkswagen police beetle in Dark) across the screen. 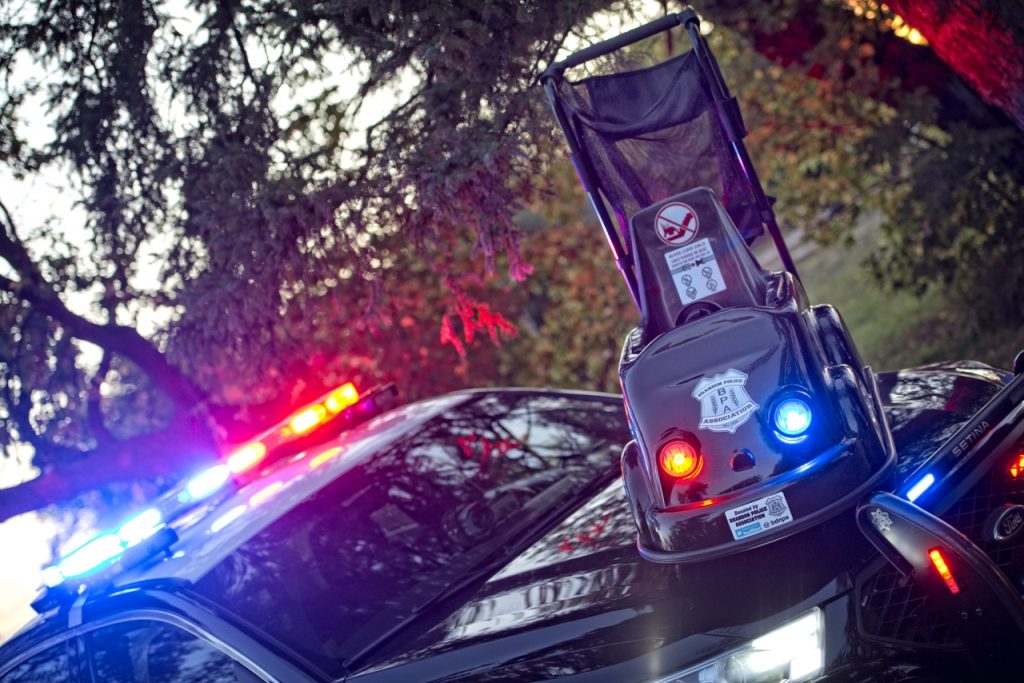 The Brandon Police Association (BPA) in Manitoba has a 2017 “Kiddie Kruzzer.”

Police vehicles have always grabbed our attention throughout the decades — that’s their job. The Audi Museum in Ingolstadt, Germany, knew this when it gathered 14 historic police cars for a special temporary exhibit dubbed “Razzia” (in English “Police Raid”) a couple years ago. These included the elegant 1930 Horch 400, one of the first motorized cop rides in Germany, according to the museum; the 1964 Porsche 356 used for highway patrol; the doorless Volkswagen Type 18 A; and a more modern artifact, a sleek 500-horsepower Lamborghini Gallardo Polizia. (A 2009 Gallardo Polizia from the Lamborghini Museum in Sant’Agata Bolognese is now on permanent display at the Highway Patrol Auto Museum in Rome by the way. Man, that thing looks mean.)

While the police cars of days gone by dredge up classic cop show nostalgia (and amusement), the ones our officers are set to start patrolling in today are pretty fascinating, too. They’re chock-full of new comforts and intuitive technology, including things like rear cross path detection, radar and forward-looking cameras.

That brings us to the 2018 Best Dressed Police Vehicle Awards. We were blown away by the submissions this year. A big thank you to every one across Canada who took the time to snap a pic of some pretty snazzy rides and email it in.

The range of colour, the attention to enhanced visibility, the creative readability and the community identity expressed in each winning entry impressed us. They have captured what it means to be a serious and attractive set of law enforcement wheels.

There is one charming entry we kept coming back to, however, that didn’t end up placing. But I think it deserves a shoutout. The Brandon Police Association (BPA) in Manitoba has a 2017 “Kiddie Kruzzer” — think of those colourful strollers shaped like cars at the mall — and it’s equipped with the “full police association decal package.” What is its primary purpose? Transporting sick children from the pediatric unit of the Brandon Regional Health Centre to surgery and/or for various testing in other hospital wings.

Additionally, Whelen Vertex emergency lighting has even been installed, which the children are able to activate while they navigate the hallways.

This miniature vehicle is the first donation to the pediatric unit the association has ever made, according to Bruce Verhelst, BPA’s vice-president, in what is hoped to be an ongoing commitment to the children who pass through the centre’s doors.

It just goes to show police vehicles get the chase done, but they can also hold a special spot in our imaginations, and — like I’m sure many children and their parents at the Brandon Regional Health Centre would say — our hearts. No wonder the lights of the lightbar are blue and red.

The Brandon Police Association (BPA) in Manitoba has a 2017 “Kiddie Kruzzer.”