Congratulations to all the winners of Blue Line’s Best Dressed Police Vehicle Awards, which showcases innovative and effective designs. We look for clear identification, graphic designs that enhance visibility, elements that show directionality of travel and effective integration of equipment and controls. A few years ago, we wrote: “Police vehicles are not just transportation; they are the calling cards of a police service to the community.” That rings true today. Thank you to everyone who submitted. Stay tuned to blueline.ca for 2020’s call for submissions later this fall. 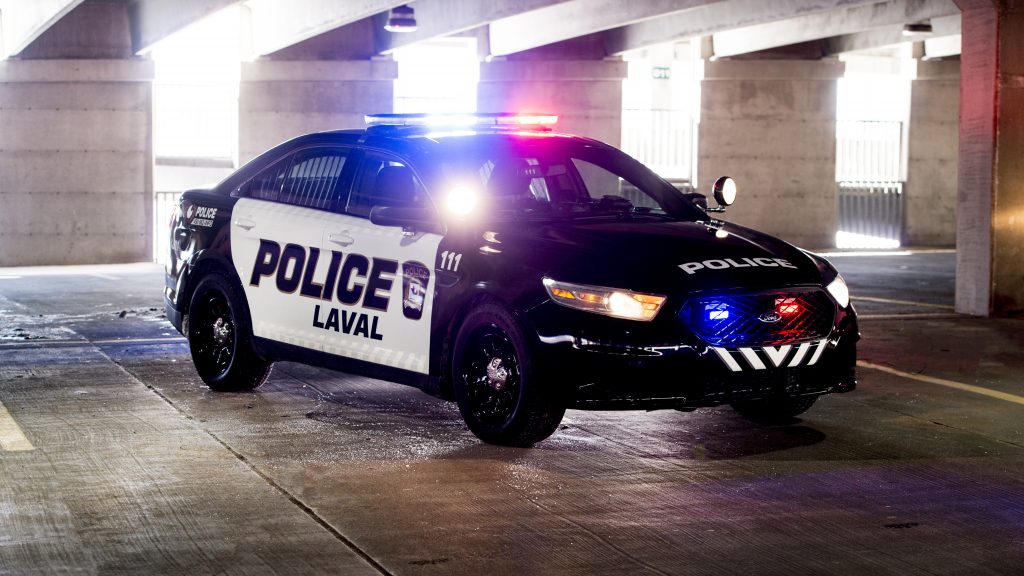 LE SERVICE DE POLICE DE LAVAL (SPL)
2017 FORD TAURUS
Laval’s police fleet is bidding farewell to its stark white cars with the pink and blue dabs of colour, which it has had for “many years.” The major change — a return to a classic black and white choice — didn’t go unnoticed by our judge, Dave Brown, also a longtime contributor to Blue Line. And so, this year’s Best Dressed Police Vehicle Award winner is SPL’s automatic, 3.5 turbo, all-wheel drive Ford Taurus, boasting updated reflective components and chevrons galore.

“I started this project with Insp. Julien Kicinski and collaborated with Lt. Frédéric Jean,” says Sgt. Alain Ouellet, who has been with the force for 16 years. “Our main goal was to create a new car where everyone in the organization would have a say. We encouraged members to come to me with their ideas for the design. It was an open platform and took seven months to achieve the black-and-white conversion.”

Many police fleets have leapt back to the back-and-white look, Ouellet points out, adding that statistically it’s been proven this choice is more visually oriented to police operations due to increased visibility.

“We wanted citizens to see us better,” Ouellet says. “And we decided less is more.”

The chevrons on the back and front bumpers also make it unique. “I did my research over a 10-month period and I couldn’t find one other police car design in Canada where there are chevrons on the front,” Ouellet notes. The fading, light grey markers on the top and bottom of the doors are also particular and attractive.

Updated reflective technology from 3M was added to the design and is featured in the gold element around the “police” lettering for increased visibility. Reflective bands are also activated inside the vehicle when the trunk or any door is opened for officer safety.

Laval Police Chief Pierre Brochet loved the new look right away, Ouellet says. “Without his support, this wouldn’t have happened.”

“One of the elements I have always looked for is quick and clear identification as a police car,” Brown adds. “Another element I like is a design showing some directionality, so drivers can see at a glance — day or night — what direction the car is travelling. I like how Laval uses simple black letters for ‘Police’ and borders each letter in gold, picking up the same gold colour as their city crest. The italicized lettering also adds a bit of a forward slant to the words, and this helps add to the directionality of the design.”

SPL has ordered 23 new Ford Taurus vehicles and three new 4×4 Dodge Chargers, all in black — to be wrapped with the new design — and slated to arrive sometime this month. They will all be patrolling the streets by summer, according to Ouellet.

Last summer, news on the new name and mandate for commercial vehicle enforcement officers in Saskatchewan was one of our most popular headlines online. The Saskatchewan Highway Patrol (SHP) replaced the former Commercial Vehicle Enforcement group and, while technically this vehicle should have been entered into the “law enforcement” category, our judge championed the design and we felt compelled to recognize this agency’s major milestone in joining the ranks of armed agencies. Plus, SHP is now also answering 911 calls and backing up police where needed, a new role for them, which we wanted to salute.

“This clean and simple design will help move them away from the perception of being for commercial vehicle enforcement only and into a highway patrol mandate,” Brown says. “Again, the italics in the lettering adds to the directionality… The white letters embedded in the blue band (and using black borders) makes such a long name really stand out.”

Reflecting the change in duties, the agency overhauled the previous white vehicles with yellow reflective stripes. “That design was dated and resembled RCMP and local police forces,” SHP states.

“This design leaves no doubt in the eyes of the public as to who we are and what we are doing,” the agency says.

SHP’s fleet manager used black reflective striping on top and below the blue panel on the sides of the vehicle for better visibility. The black chevron stripes and black lettering are more reflective than the previous blue/white chevron stripes. The crest is also reflective.

“No other law enforcement agency in Saskatchewan utilizes silver patrol vehicles and these graphics are unique,” SHP says.

MIRAMICHI POLICE FORCE
2018 RAM SPECIAL SERVICE
“I have always liked the Miramichi design and that it is different,” judge Dave Brown writes. “And they put a huge amount of thought into it. It seems simple, but the three-dimensional effect of the raised letters of ‘Police’ and the black outlining each letter is clear, but also very clever. The directionality of the design is enhanced by the placement of the unit number, the placement of the very prominent city crest and the alignment of Miramichi and ‘Police’ really helps show the direction a unit is travelling.”

Miramichi Police Force vehicles also display the wording “with honour we serve” in English as well as in French.

For night time safety, 3M reflective graphics are used on the sides, front and the rear of all of the marked vehicles. The four doors are covered in large white reflective material, while the bumper covers and front fenders have subdued, contour-fitting reflective graphics, according to Sgt. Bob Bruce, fleet co-ordinator. “Three maple leaves are displayed on each vehicle’s quarter panel, proudly promoting that we are Canadian,” he adds.

A committee, made up of frontline officers — one representing each area of the Sheriffs Branch (Court Security and Prisoner Transport, Protection Services, and Highway Patrol) was established and the vehicle graphics package was re-designed. Design elements considered included: legislative requirements, visual appeal, cross-platform compatibility, recognizability, safety, visibility and cost.

The new design features the provincial colours — gold and blue — combined into an elongated, curved stripe that carries down both sides of the vehicle and across the back.

The design adds in a Canadian flag to honour Canada’s 150th anniversary and as homage to the Canadian Forces. The Alberta Sheriff starburst is larger than before and the words “Alberta Sheriff” are prominently displayed in retro-reflective graphics. The size of the call-sign identifiers has been increased and the Government of Alberta’s core values of “Respect, Accountability, Integrity, Excellence” have been added as well.

The Alberta Sheriffs specifically chose to maintain the white base vehicle colour as opposed to a black one. This decision was to enhance approachability in the eyes of the public, ensure greater visibility and ensure the vehicle and graphics are unique to the sheriffs and not mistaken for police or other law enforcement agencies by the general public.

All of the decals used in the design are retro-reflective, ensuring the vehicle is easily recognizable at night and in inclement weather. Another unique feature is the “Highway Patrol” identification overlaid on the blue horizontal striping. This identifies traffic enforcement vehicles from other units in the fleet. “Our vehicles deployed to the Alberta Legislature are similarly identified with ‘Protection Services,’” the branch states.

A special legislative exemption was required from the director of law enforcement for the new design, as provincial peace officer agencies are not permitted to use curved stripes or overlay text on striping.

The new graphics package is entirely cost-neutral when compared to the old package, the branch adds. “All of the design work was done in house, and by working closely with the decal vendor — Cowan Graphics in Edmonton — we were able to produce the new decal package for the exact same cost as the outgoing design.” It’s also completely scalable, according to the branch.

The heritage fleet concept was developed by the Norfolk Southern Railway company, which introduced old-fashioned locomotives to celebrate its anniversary.

Five vehicles — among the 10 vehicles in the SPVM replacement fleet — were thus dressed in a design from a past decade. They travelled throughout the territory in 2018, according to operational or promotional needs. Citizens could see these cars during special events, but also on patrol in different Montréal neighbourhoods (replacement fleet vehicles are used when regular vehicles are damaged or in maintenance, SPVM notes).

“The Heritage fleet is a way to pay tribute to the police officers who have patrolled the streets of Montréal for 175 years, while making a historical nod to Montrealers,” the agency says. “It allows to create links, open dialogue and break down barriers. These out-of-the-ordinary vehicles attract attention and comment, and it is not uncommon for citizens to approach our police officers to take pictures of them with fleet cars.”

Vehicle modifications include: HD Fox steering damper and shocks, wireless remote for winch, B7 glass on hatch, a grab bar along A-pillar on each side, and B7/B6 ballistic armour.

There was significant conversation around ensuring the community was not offended by the look of the vehicle, FPF says. “It was important to reinforce the rescue component of the vehicle and its use as another tool in our toolbox.”

Originally, there had been some fear in the community that the Fredericton Police were militarizing the force by bringing in a heavily armoured “tank” into the fleet. “By designing the vehicle paint scheme as consistent with the rest of the fleet, it alleviated a lot of that fear and speculation,” FPF continues. “This vehicle has already helped evacuate citizens from a high-risk situation, keeping the public, and officers safe under the worst of circumstances.”

FPF chose to make the ARV “highly visible” with the decaling and light package, consistent with the rest of the fleet. “Its clean, professional graphics give it a much less intimidating presence,” the force says.

Thank you to Dave Brown, Blue Line’s longtime Best Dressed Police Vehicle Award judge for his expertise and dedication to this contest.
Print this page