As Canadian police fleet managers continue to deal with the ever-changing world of mobile technology, Sound Off Signal has provided a solution with a program called bluePRINT. 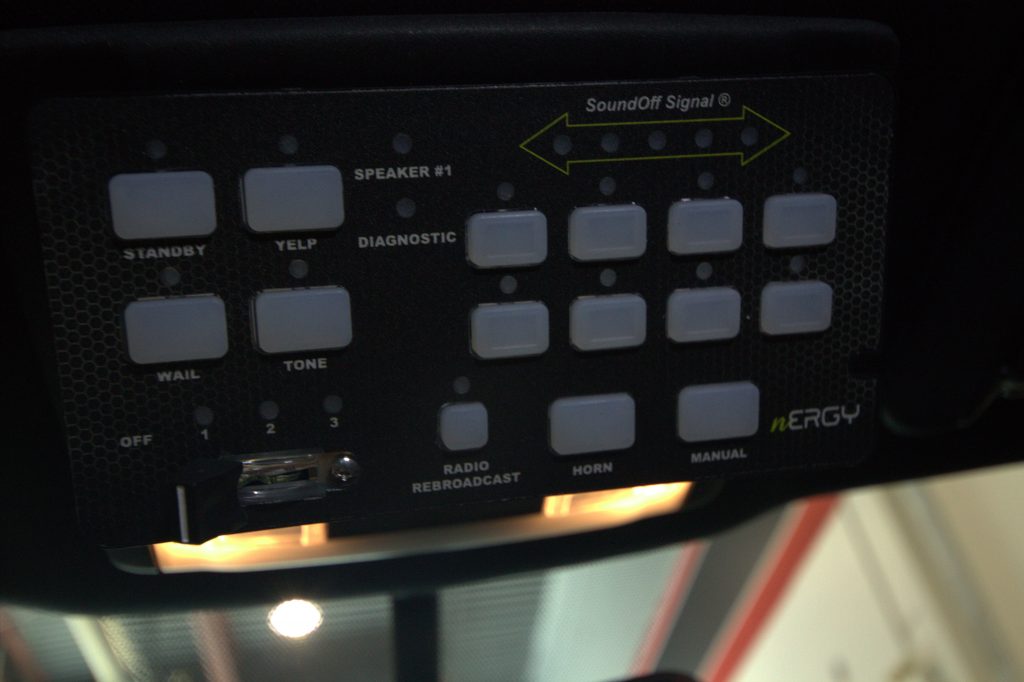 One of the first outfitters to bring bluePRINT to Canada is AVO Vehicle Outfitting Inc. (AVO), located in Port Coquitlam, B.C. Since 1998, owners Mark and Kendra Pare have established themselves as a premier emergency vehicle outfitter in B.C. AVO runs a 5,000 square-foot climate-controlled shop with seven fully certified technicians, two service vehicles and a demo bluePRINT Interceptor Utility, which allows them to deliver 500 vehicles annually. AVO says they pride themselves on not only setting the bar high for workmanship but ensuring they always offer the latest technology to their customers.

AVO recently installed complete bluePRINT systems on seven 2018 Ford Police Interceptor Utility vehicles owned by British Columbia’s Metro Vancouver Transit Police (MVTP). These bluePRINT vehicles were not only the first of its kind for MVTP, but first for all agencies in Canada as well.

What exactly is bluePRINT?
This technology is a control system package made up of hardware and software that integrates traditional siren and lights with vehicle functionality for automated logic. bluePRINT hardware has a main central controller, a remote controller node and several switching control heads that come in either a hand-held or console-mounted style, depending on operational need.

bluePRINT creates a safer environment for officers through a more effective use of a traditional emergency lighting system. This system allows officers to stay focused on the task at hand while keeping their eyes on the road and hands on the wheel. Lights and siren configurations are pre-programmed and prioritized to respond to emergency situations without the officer having to determine which buttons and switches to activate while driving.

For example, picture a traffic stop where an officer wishes to gain tactical advantage. If an officer wanted to use the high beams to create a take down wall of white light, a matrix can be programmed such that the high beam illuminates the scene only when in park.

Another tactical advantage feature that can be programmed is a feature called Blitz. With bluePRINT, the officer activates the Blitz function to instantly activate the siren and all emergency lighting to stun the potential offender.

The key takeaway here is the use of technology to make that light combination decision, as opposed to the officer dropping their eyes and having to be consciously unfocused on the threat and to refocus on the vehicle’s equipment. There is no need to lose situational awareness while trying to manipulate new technology.

Reverse collisions have always been something that’s plagued police fleets across North America. OEM (original equipment manufacturer) reverse lighting often isn’t enough, but by adding additional white light to the rear of the vehicle, activated automatically by the vehicle’s reverse trigger, bluePRINT can illuminate the area behind the vehicle, reducing the amount of times an officer accidentally backs into something.

Code 3 response is one of the riskiest things police officers are required to do. Intersection accidents can be the most severe type of accident, causing significant damage to the vehicle and the passengers.

With a press of the OEM horn, officers can create a wall of white to illuminate the intersection and sound the air horn to give added notification to traffic at the upcoming intersection. Once the OEM horn is released, bluePRINT can be programmed to set a very rapid, multi-colour warning pattern out of all the lightbar heads and an aggressive dual tone coming from the siren. This will continue for a programmed amount of time to allow the vehicle to clear the intersection. After that programmed amount of time has lapsed, it will automatically revert back to its previous state of flashing and sound.

One rather unique feature is the ability to control the emergency lighting glare as the officer exits the vehicle. Lightbar corner modules can project approximately 1,800-candela into the eyes of an officer. Being able to shut off the end cap and other side lights automatically as the door opens (while keeping it off for a programmed amount of time after the door is re-shut) helps to maintain the officer’s night vision so they can see any potential dangers more clearly and react more effectively.

Most officers are well aware of the moth-to-flame condition. This occurs when you have a vehicle full of lights flashing at a rapid rate on the side of the road. As approaching/same direction traffic sees this, they are drawn to it, potentially causing an accident from them inadvertently swerving in the vehicle’s direction and running into the back side of the emergency vehicle.

bluePRINT can utilize situational flash patterns. If the vehicle is sitting in park on the side of the road, it can be programmed to flash in a slow cautionary back-and-forth pattern to reduce any moth-to-flame effect.

Performing traffic stops and Field Sobriety Tests (FST) in areas that are not well lit can be dangerous for the officer and the subject. bluePRINT can activate just a few modules in the front of the vehicle. This will mark the unit as law enforcement on the side of the road but will not interfere with the officer’s night vision or the FST.

Leaving a patrol car running while on scene is required for certain situations, but that presents an opportunity for that vehicle to be stolen. With bluePRINT’s built-in ignition security, a connection of a few wires and a little program, the officer can now safely take the keys from the ignition while the vehicle continues to run. However, if someone enters the car to attempt to take it, the ignition will be shut down be pressing the brake or trying to take the transmission out of drive.

bluePRINT Link is an available CAN (Controller Area Network) bus interface module that is integrated into the control system via the OBD-II (on-board diagnostics) gateway. This provides access to vehicle parameters that may have not been available before by reducing the need to splice into discrete wire triggers, while also leaving the physical OBD-II port available for other vehicle equipment and functionality.

The bluePRINT Link provides access to engine coolant temperature, engine RPM and throttle pedal position, to name a few. Just like the discrete wires, the vehicle parameters can be mapped as input triggers to automate the control of vehicle lighting.

Not only does this reduce the time required to install a bluePRINT system into a vehicle, it also increases system reliability due to issues when wiring into discrete triggers.

Fleet managers will appreciate the built-in diagnostics. Unlike traditional installs and other control systems, bluePRINT integrates real time software diagnostics. In real time, bluePRINT monitors the entire system, including input voltage. Diagnostics also monitor each output for amperage draw, duty cycle, programmed current and the capability to record seven different fault modes, and track the number of times an output has faulted. If there is a failure in the light head or wiring, the system can track and record what the failure was. This significantly reduces the amount of time needed to diagnose issues, especially the intermittent issues.

bluePRINT allows for one-time set up: the installer or fleet manager configures the system with a Windows-based computer only once. That unique program or “feature build” is now transferred to every new vehicle in seconds, allowing for consistency across the fleet while saving time. The USB port allows for the configuration to transfer from a laptop to the controller.

The bluePRINT central controller does not need to be installed in the trunk or rear of the vehicle. This can lead to a decrease in installation time, shorter wire runs, but more importantly, it can significantly reduce complexity of the installation, which translates into reduced failures and reduces the amount of downtime the vehicle may encounter. No  need to independently wire in a separate headlight flasher or cut OEM wires to flash OEM lighting. bluePRINT is set up to fully integrate with all OEM police vehicle systems.

Brad Brewer is a 30-year member of the Vancouver Police Department. He was an eight-year member of the Ford Police Advisory Board and regularly gives presentations at law enforcement conferences on mobile computing, wireless technology and police vehicle ergonomics. He can be reached at sgt1411@gmail.com.