If the image to your left seems familiar, you may already know about the “Share It. Don’t Wear It” awareness campaign aimed at first responders in British Columbia. These particular images and words were chosen to represent the mental-health challenges law-enforcement officers and dispatchers face in their day-to-day work. 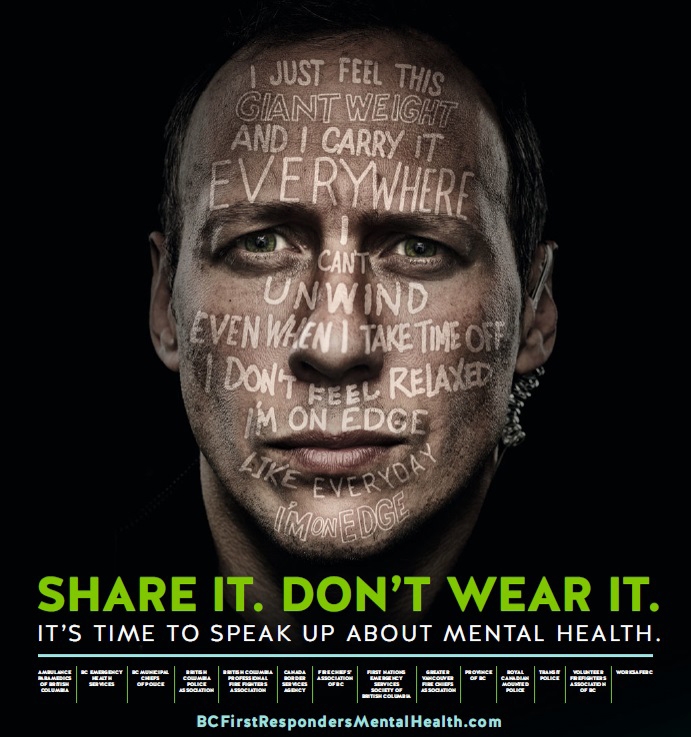 What you may not know is who’s behind the campaign — which includes a website full of tools and resources for those who are looking for help and those who are looking to help — or how it came to be. This article will describe the process so that other jurisdictions that see a need for something similar can benefit from our experiences.

The multi-agency B.C. First Responders Mental Health Committee was formed in December 2015. Chaired by WorkSafeBC, its mission was quickly defined: to actively promote positive mental health and provide the leadership and recommended practices that first responders, their communities and their leaders need.

In order to ensure a co-ordinated, cohesive approach, committee members were recruited from law enforcement, fire, ambulance service, and dispatch – representing workers and employers from paid, volunteer, rural, urban and First Nations Emergency Services. Once formed, the committee identified its main goals, one of which was to develop and pilot an anti-stigma campaign incorporating champions from various first-responder groups.

The “Share It. Don’t Wear It” campaign came out of a four-month research initiative in which the committee surveyed first responders to better understand their attitudes toward mental-health issues and the behaviours that encourage people to seek or offer help – or that deter them. Through in-depth interviews and an online discussion board, participants identified existing resources and those they felt were lacking. First responders from diverse backgrounds and levels of experience completed the study.

Equipped with those results, the committee held intensive focus groups to explore the forms stigma takes: what it looks like from leaders and colleagues, and how it can be personal, social or structural in nature.

Posters, which can be downloaded from the site, were designed with a blank space at the bottom to highlight resources, meetings, events and workshops so that the emphasis is on action. The aim is to associate the poster with a specific, time-limited event, after which it is taken down, so the image doesn’t become background noise.

The quotes that appear over the faces of the officer and the dispatcher pictured above were collected during in-depth interviews with our colleagues:

• “I just feel this giant weight and I carry it everywhere. I can’t unwind. Even when I take time off, I don’t feel relaxed. I’m on edge. Like every day, I’m on edge.”

• “I feel worn down, overwhelmed. Sometimes it’s hard to think clearly. I can’t remember when I noticed the change – it just sort of became normal, I guess.”

Respondents spoke powerfully about the need for a cultural change — a shift that must happen at the leadership level. They asked for a single source of information and resources to support colleagues and to seek information themselves. A website was created for this purpose, but that is not its only purpose. We hope the site, which houses self-assessment and self-care tools, an event calendar and resources for those in crisis, will spark larger conversations about mental health.

As committee members, we invite you to send us your thoughts and suggestions on how we can best meet the mental health needs of law-enforcement officers in B.C.

The committee will be holding the first-ever B.C. First Responders’ Mental Health Conference on Jan. 31 and Feb. 1, 2019.

Ralph Kaisers is the vice-president of the B.C. Police Association. Email him at rkaisers@vpu.ca.

Doug Semple is the inspector of Stakeholder Relations and Community Policing for the Metro Vancouver Transit Police. Email him at Doug.Semple@transitpolice.bc.ca.