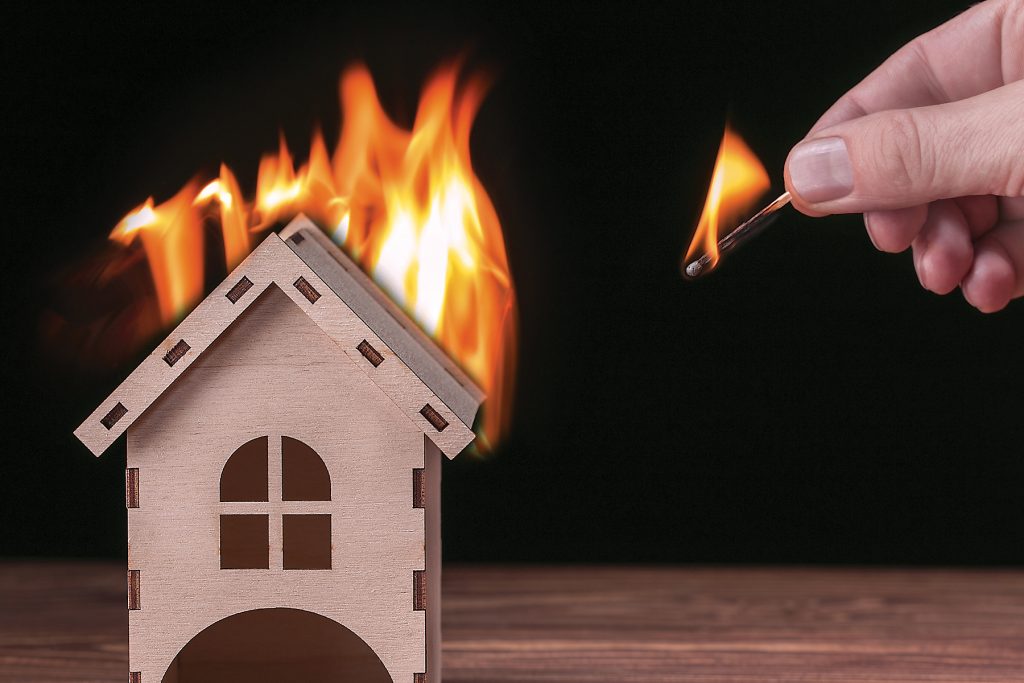 Arson continues to pose a significant problem in communities across Canada. The true prevalence of criminal fire setting is difficult to ascertain. It’s hard to detect and prosecute because fire can destroy the evidence of its origin, while intent or recklessness must often be inferred from evidence of an ignition source. In April’s column we discussed how profiling a fire setter is difficult because the characteristics of arsonists are often too general. Four types of fire setting were presented: excitement-motivated, revenge-motivated, vandalism and the rare phenomenon of pyromania. This issue, we’ll examine crime concealment, profit motivated and extremism arson.

These fires are a secondary criminal activity and are set for the purpose of covering up another crime, such as homicide. The motivation is to obliterate forensic evidence such as fingerprints, footprints or DNA, and possibly to make it difficult to identify the victim. Murder concealment is usually a one-time event. Typically, an accelerant is brought to the scene if the arson was planned.

A more common form of crime concealment arson is setting a fire after committing a break and enter. Keep in mind that often arsons are mixed-motive—the fire may also involve revenge. In crime-concealment cases, the fires were set using available materials found at the scene such as paper, rags or trash. Matches or cigarette lighters are used to ignite the fires. In an FBI study of serial arsonists, the crime-concealment fire setter did not inject themselves into the case by contacting the police, media or the owner of the property. They confided in no one other than their accomplice at the scene, and basically made no behavioural or lifestyle changes following the arson.

Automobile fires can also be an example a crime-concealment, if the vehicle was stolen, in order to eliminate fingerprints.

Offenders in this category expect to profit from their fire setting, either directly from monetary gain or more indirectly from a goal other than money. Monetary gain can include insurance fraud, dissolution of a business, destruction of inventory and gaining employment.

Examples of the latter was presented in the 2018 edition of Kirk’s Fire Investigation. The authors, David Icove and Gerald Haynes, described a case where an individual set a fire in a forest region in order to have his equipment rented to support part of the fire suppression efforts. Another example of an arson for profit case is one that the author was consulted on. In this case, a downtown Toronto building had been designated as a historic landmark and the owners were prohibited from tearing it down. Through an intermediary, a 61-year-old offender was hired to set the fire. At the time, he was finishing a sentence involving the construction of a pipe bomb. He had a long history of fire setting, which included setting fire to the drapes in his family home when he was seven and blowing up his father’s car as a teen. Although he confessed to setting the fire that completely destroyed the historic property, he did not reveal if anyone hired him and the owners were never charged.

Crime scene indicators frequently noted profit-motivated arsons include a lack of forced entry and the removal or substitution of items of value (i.e. inventory) prior to the fire. Usually the arson is well-planned and methodical, with the crime scene being more organized because it contains less physical evidence. The intent is complete destruction, with excessive use of accelerants, incendiary devices and multiple points of fire origin.

Icove and Haynes suggest investigators look for a history of financial difficulty, decreasing revenue with increasing and unprofitable production costs, costly lease or rental arrangements, overstated inventory levels and hypothetical assets, pending litigation and/or bankruptcy, and prior fire losses and claims. They also recommend examining whether there have been frequent changes in property ownership, back taxes or history of multiple liens.

Offenders involved in extremism-motivated arsons set fires in order to further social, political or religious causes. Usually, it is a single-issue grievance. Examples include abortion clinics, animal laboratories, fur farms and stores that sell animal furs as fashion clothing. Overall, extremist arsonists tend to be more sophisticated and often use incendiary devices with remote or time delay ignition.
Hate crime motivated fires are set at synagogues, yeshivas, mosques, religious schools and organizations reflective or symbolic of these religions. Usually the extremist or hate crime fire setter is associated with the ideology of the extremist cause. Search warrants include extremist literature, writings and paraphernalia pertaining to the group or cause.

In conclusion, fire setters engage in behaviour leading to arson for a number of reasons. The most frequent motives for fire setting are anger and revenge, but it can also be for financial gain or some other criminal purpose. Overall, many arsonists have significant psychiatric histories and active symptoms of a mental disorder at the time of fire setting. Some have a disorder of thought or are depressed and suicidal. Others, such as those with borderline personality disorder, are motivated by impulsivity, frustration, anger or need for attention and set fires due to their personality pathology.

Sapp, A. et al (1996) A Report of Essential Findings from a Study of Serial Arsonists. National Center for the Analysis of Violent Crime, FBI Academy: Quantico, VA.

Related
The psychology of arson: Part one
Monitoring hate speech as a law enforcement tool
Fighting hate crimes through community policing
Who are society’s forgotten cops?