Mass murder, like the attack on Quebec City's Islamic Cultural Centre in 2017 and the ongoing eradication of Iraqi Yazidis by ISIL (the Islamic State of Iraq and the Levant), is rarely without precedent. For international watchdogs, as for law enforcement, a forensic path extends backward, through escalating violence and inflammatory language, through news reports and social media, through a myriad of unresolved conflicts that lead, seemingly inexorably in hindsight, to loss of life. The needle points to the haystack, but the haystack tells us little of the needle. 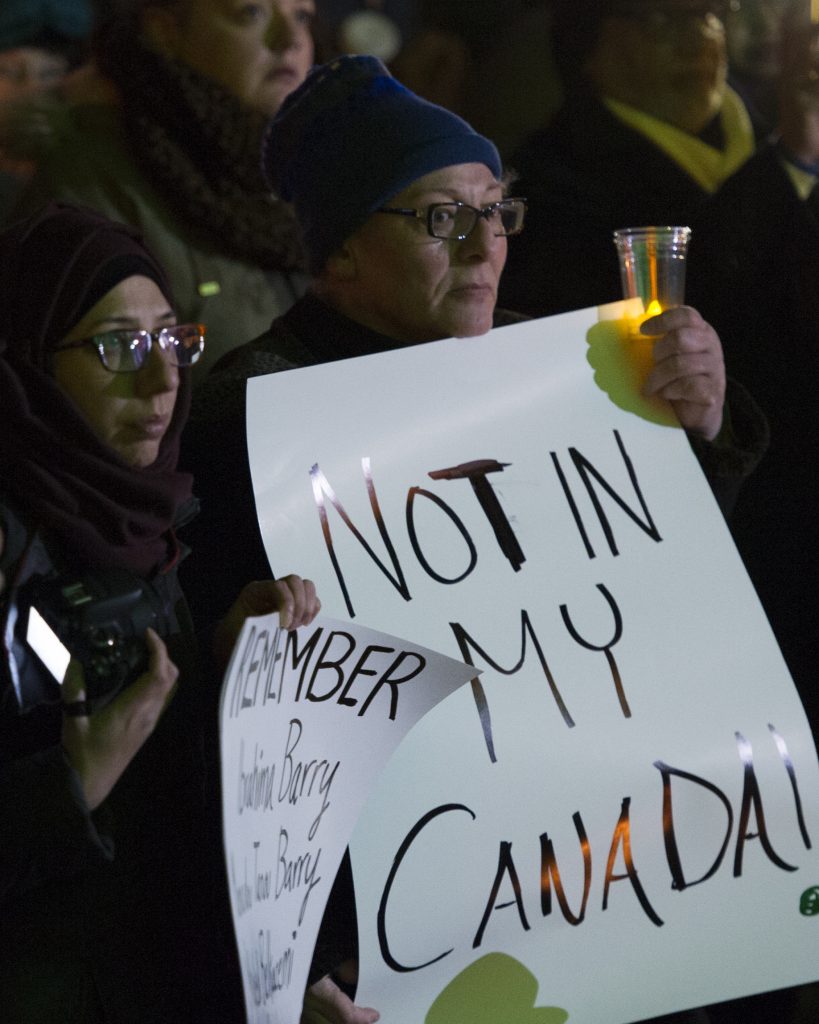 A candlelight vigil was held at the Alberta Legislature in Edmonton on Jan. 30

At The Sentinel Project, a Canadian non-profit, which works to mitigate the risk of mass atrocities in countries like Kenya, Myanmar and the Congo, we use a technology platform called Hatebase to help make those needles shine a bit brighter.

More and more, we’re talking to domestic peacekeeping organizations and law enforcement about applications for monitoring gang activity, counter-messaging extremist ideology and connecting with linguistically diverse diaspora populations. In an age of data-driven community-based policing, hate speech is being used to measure the potential for conflict, rather than solely as a forensic tool once conflict has escalated to violence.

Hatebase is a repository of multilingual hate speech which can be used to assess trending attitudes toward targeted groups, particularly groups based on nationality, ethnicity, religion, gender, sexual orientation, disability and class.

Users of Hatebase interact with the platform through a web browser or via an API (a means of machine-to-machine communication). Users can download a lexicon of hate speech vocabulary (in approximately 90 languages) and a trove of “sightings” or incident data (across more than 180 countries, but primarily in North America). While any one individual data point tells little of the local context in which it was acquired, a trend of data points can be meaningful when assessed within the context of real-world events.

The goal in developing Hatebase six years ago was to refine The Sentinel Project’s existing early warning system, which was based on direct community engagement and on regional intelligence such as news articles, field reports and social media. Hatebase strives to refine the way organizations triage limited resources across a broad geography of conflict zones by creating additional layers of data, each of which should act like an overlay on a map, helping determine aggregate areas of greatest concern. The more data assessed, the more accurate and nuanced forecasting becomes, and consequently the quicker The Sentinel Project can attempt to intercede in escalating conflicts.

An understanding of underlying tensions between communities is as vital to defusing conflict in industrialized nations as it is in developing economies, particularly at a time when xenophobic and extremist movements are ascendant in both hemispheres. Politicized legal verdicts, contested elections, violent street protests and competing land claims are all examples of the sorts of contemporaneous real-world events which, when correlated with a rise in hate speech, can result in a heightened preventive risk assessment and proactive countermeasures to reduce risk to both citizens and police.

Over the past few years, data generated by Hatebase has been used at Harvard, Princeton, McGill, Cornell and several other universities to research more effective ways of monitoring hate speech while options for mitigation remain available. Data, however, is not a panacea.

The Sentinel Project weighs both qualitative and quantitative inputs, and is mindful that data, if misinterpreted or if distributed without context, can do as much harm as good. Rather than attempting to develop a linguistic CompStat that statistically guides the organization’s actions, its design principles owe more to Microsoft’s HoloLens — an augmented view of real-world conflict through the lens of hateful language.

Headlines notwithstanding, conflict is in decline around the world, a trend attributed in part to increased emigration from authoritarian countries to politically stable, economically adaptable democracies. One of the consequences of this migration is that more people today than at any time in history are leveraging a defining attribute of democratic government: freedom of expression. With Hatebase, The Sentinel Project hopes to use this abundance of language to help peacekeepers further reduce discrimination and mitigate the risk of violence.

Timothy Quinn is Director of Technology with The Sentinel Project. He can be reached at tim@hatebase.org.
Print this page