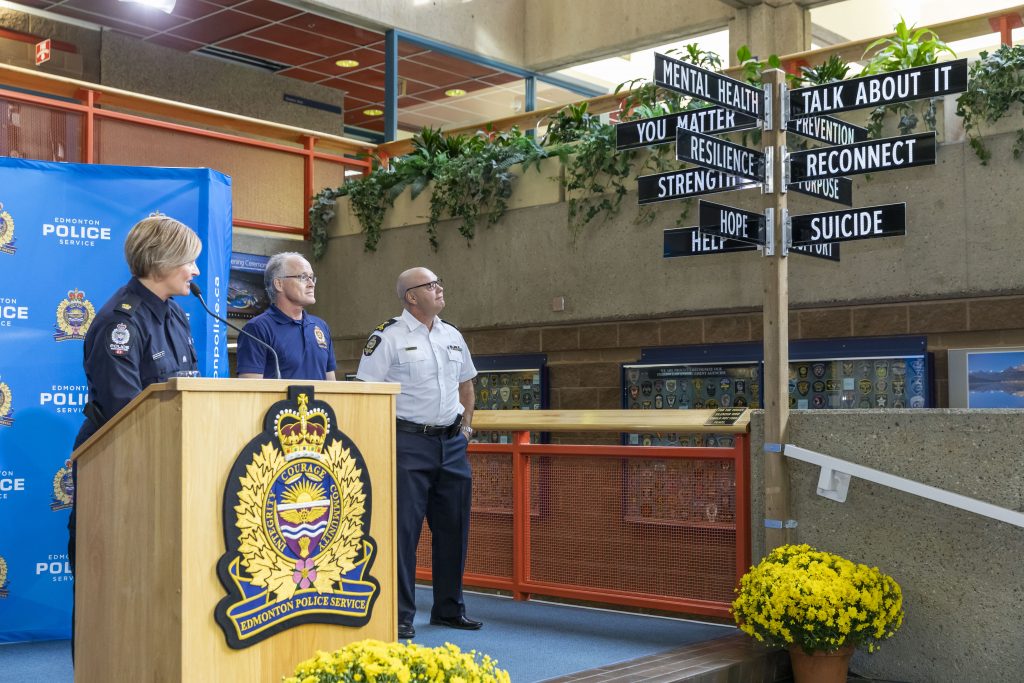 The Edmonton Police Service has a progressive employee assistance program, but felt they needed to talk more openly and safely about mental health and the stigma of suicide.

Suicide is an issue that hits close to home for anyone who has had a co-worker, friend, or family member that took their own life.

Every day, an average of 10 people die by suicide in Canada, and for every death at least seven to 10 survivors are significantly affected by the loss.

“Very early in my career, I lost a classmate to suicide, and there are too many others who suffered in silence because of shame and took their own lives,” said Acting Insp. Brenda Dalziel.  “When I spoke to other officers, whether current or retired, we all agreed that we needed to talk about it more.”

For police officers who are used to being pillars of strength in the community, it can be hard to shift roles, and ask for help when facing stress or a mental health crisis.

Officers are trained for the challenges of policing, but over time, these stressful situations take a toll on their physical, mental, and emotional wellbeing.

Despite the high-risk nature of their work, studies have shown that police officers are more likely to die by suicide than in the line of duty.

Studies also found that officers hesitated to seek help because they feared being perceived as weak, which makes matters worse when suffering through a mental health crisis.

Civilian employees in policing environments suffer from similar stress, fatigue, and depression related to their jobs, and from the pressures outside of work as well.

“People hurt from the things that come up in their lives, and those we lost to suicide probably never really wanted to die, they just wanted their pain to stop,” said Chaplain Lawrence Peck.  “The sad part about the pain of mental health is that for some people they find themselves at a point where suicide seems to be the only option.”

Because it is so easy to become overwhelmed, to feel helpless and hopeless, and lose direction – EPS created a signpost to help employees see the warning signs of suicide and better navigate the roads of life.

The signpost is a symbolic reminder that we are all together on this journey, and we need to be able to ask for help with directions to avoid making a wrong turn.

The new Suicide Prevention Signpost was unveiled at an employee wellness event at EPS headquarters on September 16, 2019, during Suicide Awareness Month.

Similar signposts have since been installed at each EPS division station as a constant reminder to employees that support is available, and as a memorial to those lost to the senseless tragedy of suicide.

The sign’s words were thoughtfully chosen to encourage employees to talk more openly about their challenges and seek a more positive direction: Suicide, Prevention, Mental Health, Talk About It, You Matter, Purpose, Reconnect, Resilience, Strength, Support, Help, and Hope.

“Preventing suicide takes all of us to care and to act,” Chief Dale McFee said.  “Let’s continue to build awareness and a safe environment for employees to share their troubles.  Let’s reach out and help others struggling to carry their burdens.  Most importantly, let’s help them find their way, and restore their hope for the future.”