Embracing New Roads, supported by the Blue Line Racing Association, was developed in Edmonton by a group of individuals who have a vested interest in traffic safety 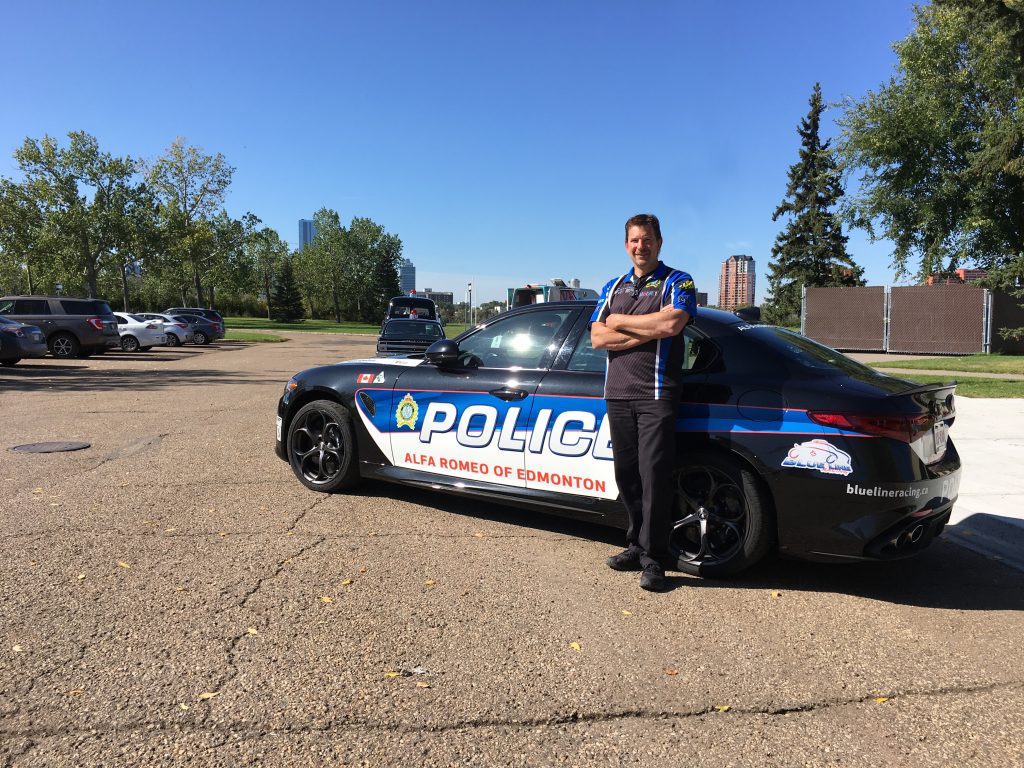 With each generation—and since the inception of the first vehicle—some of our earliest memories are exposed to a plethora of images, sound bites and marketing initiatives geared to create the ultimate automotive fantasies. Through movies, television commercials, videos, etc., we are taught that driving is fun, sexy and offers a heightened sense of thrill and control. Even the auto industry would like us to believe that “our” vehicle is an extension of “our” personalities. Yet at the time we get our drivers licence, we are told everything we found exciting about driving (i.e. speeding, drifting, jumping, etc.) is now illegal and we must be responsible drivers. These actions are dangerous and should not be performed on public roads.

At the age when we are most impressionable, we are offered the opportunity to gain a learner’s permit, and ultimately a driver’s license, and as some often call it, this can be a ticket to freedom. A ticket to freedom to a young person is a big responsibility and those feelings of excitement and nervousness can soon be changed into risk-taking and dangerous habits.

The association believes that education versus enforcement is the key to curtailing illegal activities rather than driving it underground and creating an “us versus them” environment and mentality. The association’s initial Street Legal program was a success, however, changes were needed to adapt to today’s generation of young people. Embracing New Roads’ traffic safety program was presented for the first time to students in the fall of 2018 by members of the association.

ENR was developed for 14-18-year-olds, or those in grades 10-12, to address traffic safety issues in a way that ignites their attention. It seeks to actively engage young audiences so they are aware of the social pressures and real-life consequences of four main traffic issues:

This is conducted through a town hall-style of presentations with classes in high schools where there isn’t any preaching, lectures or judgments.

“Embracing New Roads is geared towards today’s youth” says Mike Wynnyk, a retired Edmonton police sergeant and the Blue Line Racing Association president. “ENR focuses primarily on the ‘why’ of traffic safety and what society deems appropriate… The students we present to have a sense of inclusion and are then more apt to accept the safe practices. Once the buy-in is established, that’s when you gain success.”

ENR’s message is one that also aligns with the Vision Zero initiative, the association notes.

Another important goal for ENR is to raise awareness and take away the perceived glamour of the dark realities to carelessness and speed, like street racing, which has been misleadingly propped up by Hollywood, the music world and other forms of highly-consumed media. Embracing New Roads offers safe and controlled alternatives to unsanctioned illegal forms of auto racing occurring on public roads.

It’s thanks to the close relationship BLRA has formed with Castrol Raceway that allows this to happen. The youth are able to go the track every Friday night from May to October and the real track access is arguably what has made the program so successful, according to Wynnyk. On average, 200 or more people participate in these Friday night Street Drags.

In areas that do not have a permanent racing facility, many Alberta municipalities such as Grande Prairie, Bonneville and Vegreville have utilized their local airport as a temporary racing facility.

“We all know street racing is dangerous and claims lives every year. This facility allows the driver to test their abilities in a safe, controlled and responsible manner—much like how driver training is performed on a closed-circuit track,” Wynnyk says. “Without such a place, drivers who still feel the need to race will take their activities to the streets where the possibility of injury or even death from a collision can be the result.”

The Embracing New Roads traffic safety program consistently receives positive feedback from students and schools in Edmonton. ENR created a video series of traffic safety discussions, which are centred on the four major traffic safety topics and meant to stimulate classroom discussions afterward as well as assist the speaker with content. The program and videos are available to any police agency who would like to engage the youth and have an impact in their community in regards to traffic safety.

“To date, the Blue Line Racing Association has presented Embracing New Roads to over 15 schools and the results have been very positive,” Wynnyk reports. “The students are engaged and receptive to sharing their stories, whether it be impactful or humourous.”

The BLRA, a not-for-profit organization, began in 1997 with the inception of the Street Legal program, endorsed by the Edmonton Police Service. In the beginning, the organization consisted of just four police officers who sought to combat a street racing culture that had grown substantially in the mid-1990s.

After 22 years, with five police officers and two civilians, the BLRA still continues to be at the forefront of the auto community by attending schools, community events, charity fundraisers and participating at a Castrol Raceway in Edmonton. The members have built cars—complete with emergency lights ablaze—that will race against the youth in friendly competitions at local raceways.

“Embracing New Roads speaks to young drivers in a unique and unparalleled way,” says Det. Blair Dezwart of the Edmonton Police Service and member of BLRA. “It ignites a conversation among the youth and gets them thinking of the bigger picture of traffic safety, while still providing them a safe and fun alternative.”

* Author’s note: BLRA and ENR are non-profit charitable organizations, which are solely funded by the corporate community and run by a group of volunteers. BLRA is also a member of Beat the Heat Inc., which is an international organization of police and fire teams all delivering similar messages.

Dawn Astbury is a communications advisor with Embracing New Roads and Owner of Reach Out Communications. Previously she held communications positions with the Government of Alberta and the City of Edmonton.

Related
Q&A with Chief Rod Knecht, Edmonton Police Service
Re-integration after a critical incident or long-term leave
The impact of a line of duty death on the spouses
Governing information technology in 2019: a roadmap