In 2017, the Edmonton Police Service is celebrating its 125th anniversary. Blue Line recently sat down with Chief Rod Knecht to discuss his 40-year career in law enforcement, his six years as Edmonton’s chief of police and what he sees as the current and future challenges facing Canada’s policing community. 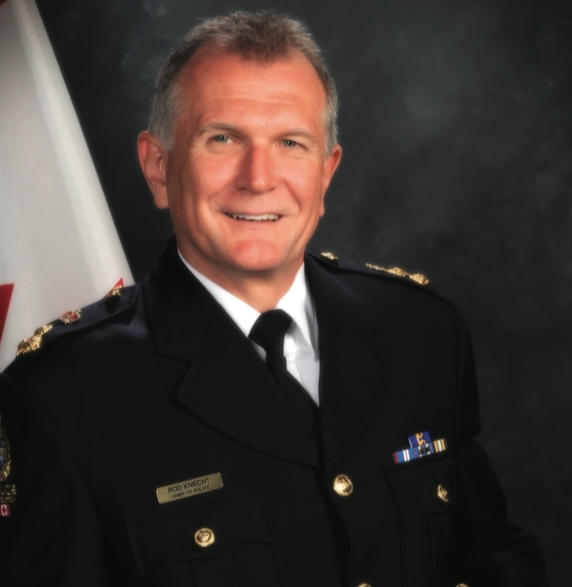 Q: As chief of the Edmonton Police Service (EPS), what is your favourite part of the job?
I get to meet people from different backgrounds, different cultures, different places in Canada and the world. Everybody’s got a unique story. I always like to hear where they come from and what they’ve done.

Q: What is the toughest part of the job?
As Chief of Police, I have many, many bosses and it’s very difficult to keep everybody happy all the time. Probably every decision I make, I always end up making somebody unhappy with that decision.

Q: Over your career, you have relocated about 16 times, and have worked in several provinces and territories. In your experience, does policing change based on where you are working?
Every community is unique. I always thought Saskatchewan, Alberta and Manitoba were very similar until I had to police in those provinces and they are very, very different. Sometimes the politics makes it a little bit different and sometimes it’s the people that make it different. I would say the similarities are the police officers. Every place I’ve been, you meet police officers that are absolutely dedicated and committed to their communities and delivering public safety in those communities. It’s a unique profession where people are completely committed to their communities and making them better.

Q: What wisdom can you impart regarding what it takes to be a successful police leader in today’s society?
That has changed over time and I guess wisdom comes with age and experience. Earlier in my career, I always thought knowing the Criminal Code well was important, but I think I’ve found, as I’ve become a senior leader in the organization, the most important thing you can do in policing is build relationships. In my job right now, my number one responsibility is to build relationships, repair broken relationships and establish new relationships.

Q: When you look back at your career in policing, what are you most proud of?
Back in the late 90s, early 2000s, I was in charge of the blood taskforce; it was an investigation into the [tainted] blood system in Canada. I would say that investigation was largely successful [because] of the relationships we developed with the victims, those people that were infected with HIV and Hepatitis C. Listening to them, working with them, and the cooperation they provided made that investigation a success. It was a very difficult, very emotional investigation and many of the people that I dealt with as witnesses passed away during the course of the investigation.

Q: With the EPS celebrating its 125th anniversary this year, what do you think are the most valuable changes that have been made since you been Chief?
When I first got here, I think we were somewhat myopic. As an organization, we were focusing inwardly and I think what we’ve changed over time is that we’re more outward focused. We have a very robust outreach program. I think we listen better to the community and I think we put service first over self. That has evolved over a very short period of time and the members deserve the credit for that. I would say we’re doing a much better job of listening to the community and delivering a policing service the community wants as opposed to telling them what kind of a service they should get.

Q: Let’s talk about that community outreach, in particular, the work the EPS has done with Canada’s Syrian refugee community. Can you share with our readers your experiences working with Syrian refugees?
About 18 months ago, we had an influx of Syrians coming to Canada and coming to Edmonton, so we developed a strategy around working with that community as they arrived. It was a program we called First Positive Contact. When the reception centres were set up here in Edmonton, we had a large police presence there. We helped them find places to live and helped them create a safe residence. We gathered food, clothing and furniture donated by members of the police service and brought those to their apartments. We thought if we could have a first positive contact with these people when they arrived in Canada, it would help us work with that community going forward. For a lot of those folks, specific to the Syrian community, the police where they came from are the bad guys and we just wanted to change that dynamic and have these people have a very positive image of their police service. As a result of that, we got the first International Human and Civil Rights award.

Q: What do you think are the major issues concerning Canada’s law enforcement community?
Our number one issue right now, certainly in the EPS — and I would suggest right across Canada in police services — is cybercrime. There’s not a crime out there that can be committed in the real world that can’t be committed online. We face the challenge of social media everyday. About three or four weeks ago, we had a police shooting and it was a situation where we were having to respond in real time because the individual’s Facebook page became very public as we were doing the investigation. It changed the dynamic of how we were approaching that entire investigation as a consequence of what was being published in real time on social media. I think social media can be a tremendous asset for policing but it can also be a tremendous challenge and I think we have to do a better job of responding to social media.

Q: What advice do you have for people who are considering launching or advancing their career in policing?
I don’t think I would have done it for 40 years unless I thought it was a great career. It is, in my opinion, one of the greatest careers out there. It can be so rewarding. Some of those rewards come instantaneously when you help somebody, when you make a life better. Some of them are more long term. Everyday is different in policing. If you’re somebody that gets bored easily, this is the career to get into because everyday is different and everyday can be very rewarding.