Scholars from around the globe, Canadian police officers of all ranks and other experts with a stake in the law enforcement field converged at Wilfrid Laurier University's Brantford, Ont. campus on April 29 to discuss evidence-based data and analyses concerning gender inequality in policing for the inaugural Recruiting, Retaining, and Promoting Women Police Officers conference. 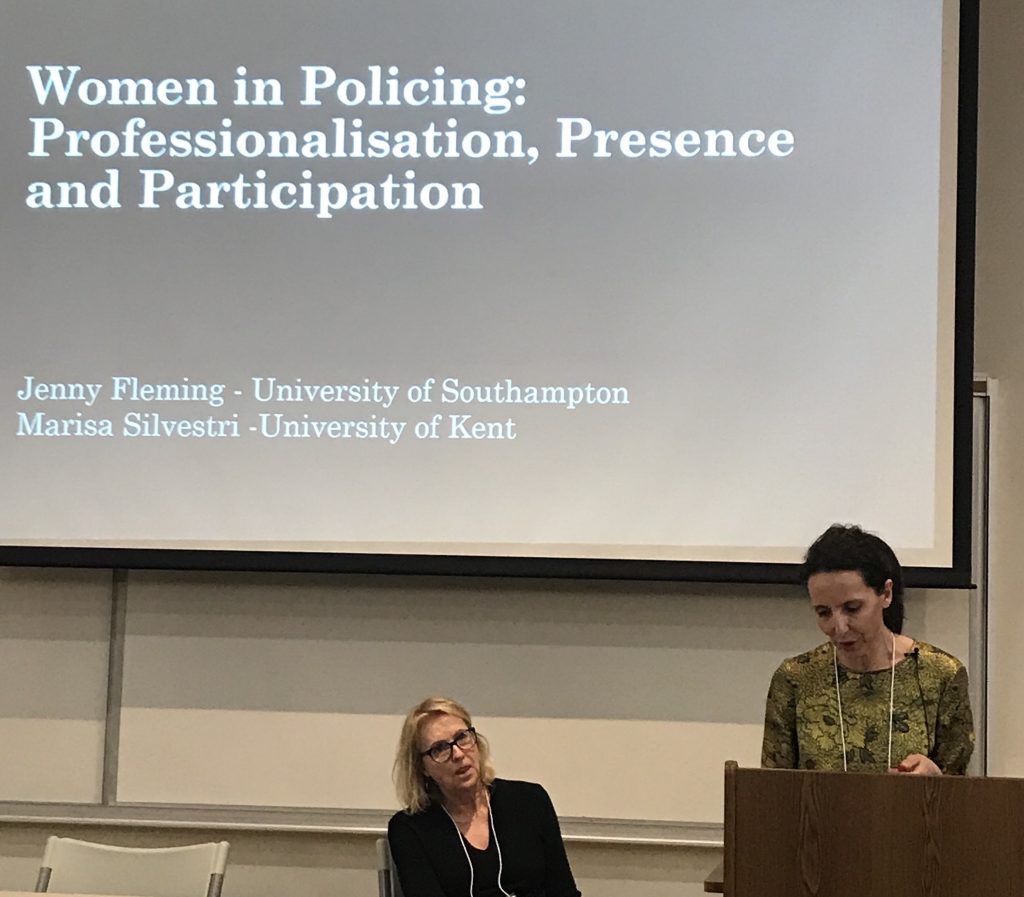 Marisa Silvestri of the University of Kent

“Research has been quite clear that women are underrepresented at all levels of police organizations and that they face challenges including sexual harassment, lack of mentorship and exclusion from the ‘boys’ club,’ especially if they become mothers,” said Debra Langan, who, with fellow Laurier associate professor of criminology Carrie Sanders, has been researching women’s experiences in police organizations since 2013.

“The goal of the workshop is to work with researchers to identify how we can transform the rich literature on the barriers faced by women police officers face into actionable recommendations. Our ultimate goal is to improve the overall experience in the workplace for women and also for men.”

Conference speakers examined issues such as tokenism, barriers like “marriage tax” that impact retention and promotion, attracting women to the cybercrime sphere and information technology side of law enforcement investigations in an increasingly connected world, as well as defining success beyond upward mobility and rank.

Revisit the purpose of policing, Jennifer Brown of the London School of Economics and Political Science in the U.K., told attendees, and “re-balance the skill sets that both men and women bring to policing.”

Brown also stripped down the entrenched idea of the dichotomy of what women and men bring to policing. “The point I want to make is men and women can have both masculinity and femininity and a balanced police force has to capitalize on both.”

Jaqueline Drew of Griffith University, Australia, highlighted this news and noted “careful consideration needs to be given to how we promote and support female officers in the promotion systems.” She looked at why equity programs fail, saying “the big stick approach is not going to work; it reinforces negative perception of gender equity policies.” Gender-focussed policies should simply be sold as good organizational practices; move the goal of unification into the limelight.

The room had a good laugh when Canada’s Linda Duxbury of Carleton University told them the secret to getting ahead is not having a child and the key to balance is “marrying well.” She unveiled an interesting finding about how in 2001, female police officers were more penalized than their male counterparts for putting family first. Now, according to Duxbury, men who seek paternal leave or time off to support partners, children, etc. are seeing more repercussions.

“I think it’s time we retire the old boys club analogy,” added Dorothy Schulz of The City University of New York and John Jay College of Criminal Justice. Schulz entered railroad policing in 1970 and highlighted how things have changed and how now we may be selling women in law enforcement short based on a narrow definition of success linked to the number of chevrons on a uniform.

“Never has there been a time that women have been so in control of criminal justice,” said Marisa Silvestri, University of Kent. “So, there’s loads to celebrate.”

That being said, narratives of success have masked some troubling facts in policing, she continued, like enduring heterosexist culture.

“I’d like to encourage us to think of success not as something as a given, but think of progress alongside regression. You can have both at same time and we need to be mindful of that.”

The conference was supported by the new Laurier-based Centre for Research on Security Practices and is funded by the Social Sciences and Humanities Research Council of Canada.

Conference organizers — Debra Langan, Carrie Sanders and Julie Gouweloos — noted they will be compiling and disseminating a report based on the event in the near future.

(Find the article, “Policing and mothering: The combined challenges of work and home” by Langan, Sanders and Gouweloos HERE.

Find more photos from the conference below. See yourself? Email rfrancoeur@annexbusinessmedia.com for a copy.

Marisa Silvestri of the University of Kent

Related
Policing and mothering: The combined challenges of work and home
The future of police recruiting in Edmonton
Changing what power looks like in the workplace
Boots on the Ground non-profit celebrates launch • PHOTOS and VIDEO