Features
Changing what power looks like in the workplace

It seems like the time has come once again to have a hard discussion on reframing the gender balance issue in law enforcement. 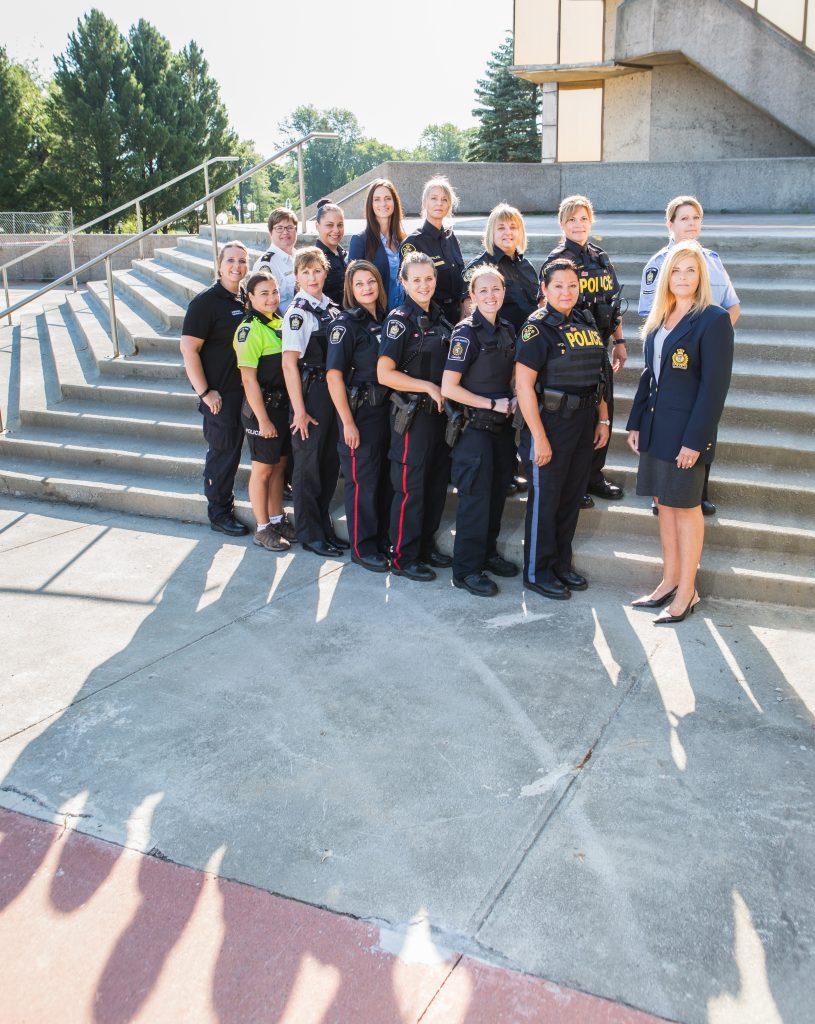 Members of the Algoma Women in Law Enforcement include local

Women continue to be underrepresented in police leadership roles, especially at the senior levels: about 15 per cent of leaders within the 21 per cent of uniformed officers in Canada are women and about seven per cent are female police leaders in the United States. This is the highest proportion of Canadian women leaders ever recorded — compared with seven per cent in 2007 and less than one per cent in 1987, when I began my career. Data collection from Statistics Canada on females employed by police services only began in 1986, when women accounted for only four per cent of all officers.

For those of us who are employed in organizations of less than 150 officers, women hold even fewer leadership positions and there are fewer opportunities for advancement, according to the Status of Women.

Female command staff leads noticeably few police organizations and yet over 60 per cent of the world’s university graduates are women. Moreover, women control the powerful majority of consumer goods buying decisions, as reported by numerous reports and media sources, and hold some of the most powerful positions in North American business.

I recently explored the topic of “Feminist Leadership” for HQ Magazine, the official publication of the Ontario Association of Chiefs of Police. The theory of feminist leadership explores our conception of power and leadership in work environments, which is inextricably linked to the lopsided social and cultural structures that marginalize women. Feminist leadership as opposed to “feminine” leadership recognizes equality, mutuality and the absence of gender role behaviours.

Catalyst, the North American-based non-profit research and advisory, reported in 2007 women in leadership positions face specific dilemmas as a result of a gender “double bind,” such as polarized perceptions, forcing them to work towards higher standards of competency than their male counterparts to be recognized. I would argue that since that study, little has changed.

In this divide — a woman’s potential on one side, and their relative absence from the highest levels of leadership on the other — it is tempting to argue about “fairness” and “equality,” or to assume that surely the skilled, competent women who don’t make it to the top must be doing something wrong if they are not considered for the position. There seems to be a struggle between balancing leadership teams without tipping the balance towards competency exceptions or the perception of concessions. This seems to be the challenge — building a gender-balanced organization without making exceptions on leadership competency.

OK, but just what is “leadership competency?” Edwin Meese and P. J. Ortmeier reported competencies required of police leadership in the 21st century as communication, problem solving, analytical thinking and ethical decision-making. These “transformational leader competencies” were cited as the example that would create a more gender-balanced organization and culture, according to Patrick J. Hughes in his 2011 text, A New Sherriff in Town: The Barriers of Structural Discrimination Facing Women Leaders.

A 2012 Harvard Business Review study stated competencies women excel at were getting things done, being role models and delivering results. These skills describe leaders who take on difficult challenges, ensure that people act with integrity and who achieve challenging results.

We know the police culture, deeply rooted in paramilitary leadership, is still bound by traditional leadership models that focus on strong authoritative leaders, leaders as individuals, leaders that value power and position, and leaders that are inclined to feel safe in finding common characteristics amongst one another.

Feminist leadership is about changing what power looks like in the workplace. Our organizations would change significantly if we focused on building community and relationships, and if our leaders are recognized because they are as concerned about people as their own personal power within our organizations.

I would suggest that members who felt cared about, valued, respected and empowered would report higher leader competencies than in those they see in constant competition for power, often at the expense of others.

Leadership styles and positions should be as diverse as the members they serve; yet too often the women who possess these skills are left behind in the power struggles of hierarchies.

Advanced leaders have figured it out: diverse gender balance delivers better and more sustainable performance. Take a cue from the private sector: another Catalyst study from 2011 showed companies with more gender-balanced leadership teams outperform those with less by 26 per cent and a 2014 Gallup study revealed gender diversity increases success in business.

Additionally, female leaders are more likely to consider competing interests and take a co-operative approach when making decisions, according to a 2013 study conducted by A.T. Still University in Arizona and McMaster University in Hamilton, Ont.

The best leaders prefer leading the change rather than following it. They know that to do this they need to add a diversity of experience and opinion to their teams. In other words, the more women leaders on the team, the higher the team’s social intelligence.

Leaders who allow their opinions and personal bias to be challenged by the viewpoints of others are the transformational, inclusive mentors that we need. It would only make sense to focus on the leadership competency of a more gender-balanced diverse team, rather than just the traditional leadership competencies of its current members and those they feel comfortable with — those who are just like them and don’t present a challenge in rationale.

Joining knowledge and awareness of equity, diversity and inclusion (EDI) in our day-to-day work is essential to organizational and leadership success. EDI is a recognized practice that helps us see things from differing and new perspectives. This will strengthen the capacity of work teams, create a positive and respectful work environment as well as a workforce and police agency that is reflective of our diverse communities.

It also means we need to invest in officer training, targeted recruitment efforts and partnership/community engagement to legitimize our relationships with diverse communities to do a better job at representing them. And that includes women.

Building a more gender-balanced organization takes planning and determination. We need to put the focus and the accountability where change happens: on the frontlines and we need to focus on the barriers women are facing daily. As with other change management initiatives, the responsibility ultimately falls to leaders to communicate to members what the benefits of diverse leadership are. They must also communicate what it will do to better represent everyone’s voices and give their female members a voice in that process.

Be that as it may, many police managers (both male and female) are still uneducated in all things gender. Law enforcement leaders have been taught to fear the recognition of gender differences, such as different communication styles, leadership proficiencies or career goals, rather than to become skilled in understanding and supporting them.

We have been forced to repeat the refrain “only competence counts” instead of changing our thinking about what the definition of “competency” is and that diversity in leadership competencies may contribute to better performance, innovation and morale.

This isn’t about quotas; men and women alike are intensely uncomfortable with targeted quotas for women. Men feel that they are deeply unfair, while women are insulted at the idea of being perceived as getting promotions only because of their gender. We need to remove systemic barriers and take the weight away from those coveted tasks and assignments that influence promotion decisions. We need to provide opportunities like mixed-gender development teams. We need to look at processes aimed at balancing the organizations’ overall culture and integrity, rather than just promoting women. It’s about balance; of course not every woman is a leader, but every woman can lead within her area of influence if barriers and biases are challenged and removed.

Police services need strategies and goals to address real barriers, develop plans to track/analyze demographic data on applicants and new hires, implement methods to improve objectivity and transparency in the promotion process, and create methods to address perceptions of stigmatization. Until this happens, leadership teams will not fairly represent the characteristics of neither the agency’s members nor the communities they serve.

Insp. Monique Rollin has served for 31 years with Sault Ste. Marie Police Service and is currently assigned as the division head of Investigation Services and Professional Standards. She is also president of the Algoma Women in Law Enforcement. Reach her at m.rollin@ssmps.org.
Print this page