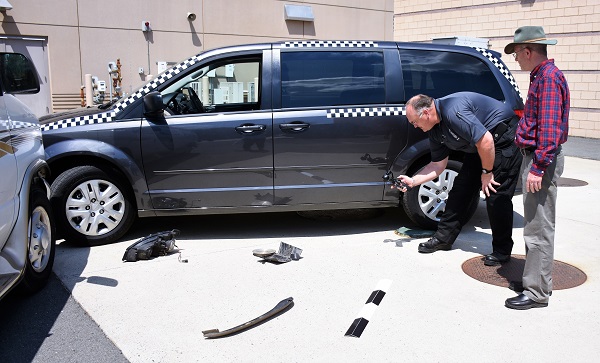 S&T’s program partner uses 3D-Hawk to scan a simulated bombing scene at the May 2018 operational field test of the technology in Fairfax County, Virginia. The footage captured will be used to render a to-scale 3D model of the scene. Photo: S&T

When officers arrive at a crime or crash scene, they have to spend a lot of time looking for evidence, processing it, taking photos of it, and documenting.

To help make this process more efficient, the U.S. Department of Homeland Security’s (DHS) Science and Technology Directorate (S&T) has teamed up with the Israeli Police to invest in a new tool. The tool, called 3D-Hawk, can “turn a crash or crime scene into an interactive 3D model within minutes, based on high-definition (HD) video footage.” This helps the investigation move from an incident scene to the police station for in-depth analysis, so normal activities can resume. Roads could be cleared sooner, evidence documented more quickly, and investigators could have an exact replica of the scene to build a case and verify witness testimony.

Work on the 3D-Hawk started in June 2015 after the Israeli police raised the need of such technology during a meeting with S&T. As part of a bilateral agreement with the government of Israel, S&T engaged in joint research and development efforts that are advantageous to both parties.

“Israel is one of our strongest allies, and they have quite a bit of experience in many of the same first responder challenges and issues we deal with in our country,” said Milt Nenneman, S&T first responder program manager, who oversees the 3D-Hawk project.

A product of the Israeli company B-Design3D, the tool consists of an HD video camera, a dedicated Site Survey Set for shooting from above, a short handle for up-close shots, a smart phone for showing what the camera is capturing, and a laptop with software for turning video into 3D models.

Armed with a mouse, investigators can do a number of things with the interactive model. One is moving around the virtual scene. If they want to see in detail a specific location, they can click on it. Another feature of the model is measuring distances and heights by calculating the line of sight to verify witness testimonies.

“The uniqueness of 3D-Hawk is that it is made mostly for the police and other first responders such as firefighters and bomb squads,” the company says.

In May 2018, the Fairfax County Police Department (out of Virginia) was able to try this new tool during an Operational Field Assessment with S&T and its Israeli partners. The 3D-Hawk was tested on three types of mock scenes – a car crash, an outdoor crime scene involving a car bomb explosion, and an indoor homicide.

“First responders with no prior access to the tool were able to record a scene in approximately five minutes. The full rendering of the environment can take up to 30 minutes,” Nenneman said. “This is significantly less time than the capabilities that currently exist for first responders.”

The fake homicide scene depicted a victim sitting on a sofa, his head tilted back, a gun and a suicide note in front of him. The Israeli company asked a Fairfax County Police detective to go around the room with the video camera and shoot the whole room, including its walls, the table beside the victim, and finally, the pistol. Next, the detective turned the videos into multiple 3D models, which he then combined using the 3D-Hawk software.

“You want to show how each layer of the 3D model is a layer in a story that crime scene investigation officers need to tell themselves, their commander and the court,” said Gil Koubi, vice-president of marketing for B-Design3D. “The idea is to empower police forces with the power of 3D.”

Both the Israeli police and Fairfax Police have incorporated the 3D-Hawk technology into their work and say they have created thousands of models since the assessment in May.

“I am very impressed with the equipment and the training that we received,” said Second Lt. Richard Buisch, Fairfax County Police Crime Scene Section. “The 3D-Hawk is much more effective and efficient, and much easier to use than other 3D scanners we have dealt with.”

He said the technology can be used successfully to further document crime scenes and reconstruct crash scenes, instead of just taking photos.

After the assessment of the tool, the lieutenant and his detectives provided feedback to S&T and its Israeli partners regarding upgrades involving indoor scenes, ballistic evidence, projector viewpoints and bloodstain patterns.

As part of the bilateral agreement, S&T provided three prototypes to be used on a rotational basis by state and local law enforcement agencies; and the government of Israel provided three systems to several of its police units. The Fairfax County Police continue to operationally pilot the 3D-Hawk they used in testing, as are the Ohio Highway Patrol and the U.S. Federal Law Enforcement Training Centers.

Responders and participants at the May 2018 3D-Hawk operational field assessment use the technology to scan a simulated car crash. Photo: S&T