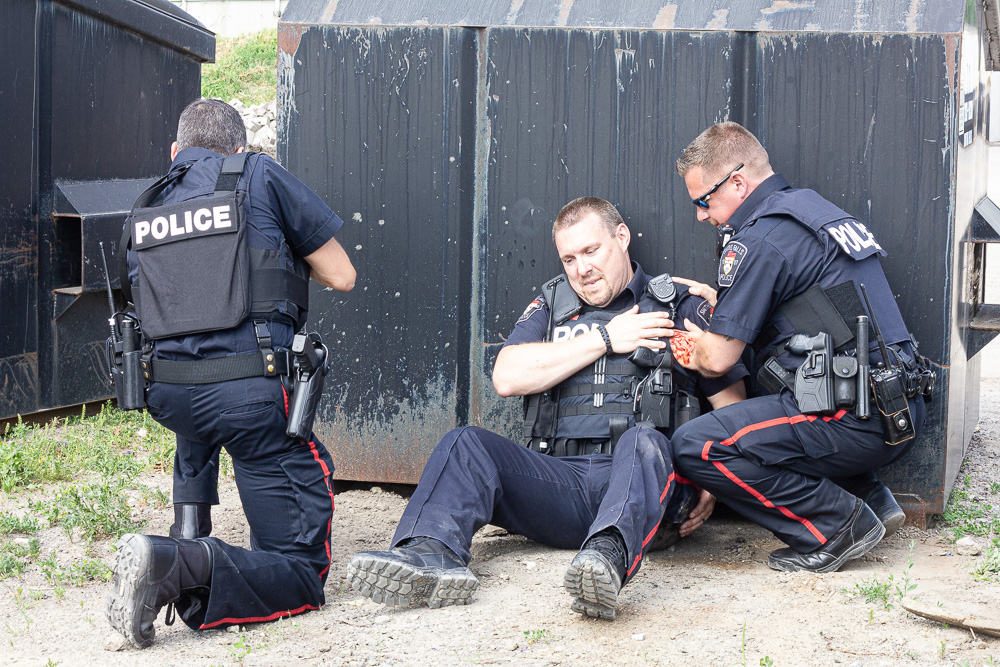 It could happen anytime; you’re on duty and someone needs help. It might be a citizen, it could be your partner. It might even be you. While you’ve probably had first aid training before, and you might remember the steps to help someone who is injured, can you perform first aid while in an active threat situation?

The new Law Enforcement First Aid (LEFA) course from St. John Ambulance (SJA) takes what an officer learns in their standard first aid training and enhances that knowledge to address these very situations.

Focusing on giving first aid in hot, warm or cool zones, including during active threats, the LEFA course is designed to allow a tactical response by officers and then complement it with the skills-based opportunities to practice life-saving first aid and CPR. The course focuses on techniques suitable for self-aid, buddy-aid and aid for citizens or those taken into custody.

“Our goal with this new program is to help law enforcement officers save lives in difficult and intense situations,” says Shawn McLaren, chief learning officer of St. John Ambulance Canada. “The course expands on the skills learned in standard first aid training… For example, it teaches officers to control bleeding with tourniquets, apply chest seals, and how to evacuate casualties using tactical rescue carries. These skills are honed during over four hours of practical scenarios designed to take officers from the initial call, to providing first aid and CPR based on how the situation unfolds.”

All of the scenarios draw on the experience of the officers who helped develop the course, adds Lisa Paul, a former police officer and the current director of Learning, Operations & Community Services for SJA Federal District.

“The subject matter experts have over 300 years of policing experience contributing to the development of this course,” she says.

The course draws on the knowledge and experiences of police officers at the local, provincial and federal levels, as well as input from Canada Border Service Agency officers, Canadian Armed Forces members, pre-hospital responders and first aid experts, to ensure it is needs-based training, congruent with current law enforcement training practices, all while meeting provincial and federal regulations for first aid training.

Since each service will have different needs and requirements, SJA is offering three variations of the new LEFA program.

*If a re-certification is applicable in your province/territory. Learn more by checking with your local St. John Ambulance office.

3. LEFA Tactical: One day, one certificate

It is a challenge to take officers off the road for two to three days, especially if they already have their first aid and CPR certification. For this reason, LEFA Tactical focuses on the most relevant curriculum components from a standard first aid course, such as severe bleeding. The LEFA components that are added would be the use of tourniquets and chest seals. The day is devoted to hands-on law enforcement scenarios based on past officer experiences.

No matter which LEFA stream you chose, officers will be better prepared with the confidence and skills to provide life saving skills as part of their job.

“We wanted the course to be informative but also realistic,” explains Scott Thistle, a longtime SJA instructor and police officer in St. John’s, N.L. “The scenarios we run through are intense and relatable for officers.” This ensures a higher level of motivation in the classroom and ultimately a higher level of understanding, according to Thistle.

“Your heart will beat fast when you’re in this classroom; we’re talking about our own real-life experiences and how to apply first aid best practices in an active situation. You’ll be engaged, 100 per cent,” he continues.

“One scenario we ran, the subject approached the officers with a knife. The officers responded with lethal force and then gave first aid for the gun shot wounds,” adds Dave Rakobowchuk, a police officer in Smiths Falls, Ont. and SJA instructor. “Another pair opted for a CEW (conducted energy weapon) and had to give first aid for the broken nose sustained when the suspect collapsed to the ground.”

The LEFA program leans heavily on the “needs-based” or “problem-based” learning methodologies, which fosters an environment of collaboration and problem solving. The instructor, a retired or active law enforcement officer themselves, will have the ability to guide the learners through scenarios around which officers can insert their own experiences.

The curriculum modules of LEFA can be customized for specific law enforcement agencies, based on their needs and the expectations of the officers.

“For example, emergency childbirth is a module in the LEFA course that received good feedback because officers get involved in this medical emergency,” says Paul, who delivered a baby at a roadside traffic stop three days into her policing career. “This module teaches officers how to support a mother and neonate.”

Some services may not need to emphasize certain modules as much and can substitute another scenario that may be more applicable to the experiences of that group of officers.
Long overdue

As the LEFA course was piloted across Canada, one particular theme kept coming up: the content is relevant and applicable to law enforcement officers. One officer who took a pilot in St. John’s, N.L., wrote in his comments, “Excellent expansion of first aid scope to include under-fire situations. Long overdue.”

“Comments like this helped us realize that we were on the right track and that law enforcement officers saw the value in this new program,” McLaren says. “It’s very satisfying to know that people have reacted so positively to this program.”

Who will teach a LEFA course?

“It was our belief that to make the program come alive we needed someone who understood the demands of an officer in a given situation,” McLaren explains. “This practice allows us to help organizations develop internal instructor resources or send in qualified instructors who understand a tactical environment.”

SJA’s motto is to “save lives at work, home, and play,” he adds. “This new LEFA course gives officers the ability to do just that for themselves and others in the community, while they continue to do their incredible work.”

Kevin McGowan is a project manager and curriculum developer at St. John Ambulance Canada. He is based in Ottawa, Ont.