In law enforcement today, there is a certain emphasis placed on training for active threats (shooters), and rightly so. In the current climate these adversaries, as that is how they will be referred to in this article, seem to be very busy. Las Vegas and Sutherland Springs, Texas, are two recent locations that come to mind for such heinous acts. There is a lot of training the law enforcement community goes through, all of it to prepare us to deal with these types of incidents. Unfortunately, you cannot train for every venue. 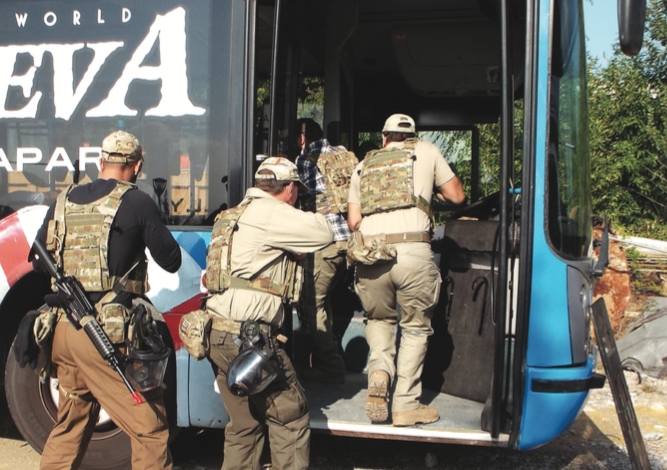 A basic understanding of the linear assault concept

Responding and mitigating adversaries in schools is a focus point. This is excellent training as it gives us hands-on practice and the groundwork needed for incidents inside of school buildings. A school may not be a hotel — like in the Las Vegas incident — but it is still a structure, and the tactics employed inside of a school are the same as those used inside a hotel. Of course, there are certain variances. Elevators, as in Las Vegas, are exceptionally vertical, and there may be parking garages above or below the main structure.

On Aug. 1, 1966, the Texas tower incident demonstrated that an individual who establishes an elevated position could quickly assume tactical superiority. Add in some training and a lot of firepower, and you end up with quite the adversary to eliminate.

It’s imperative that we continue to train and attempt to understand what drives these individuals to conduct such profound acts of violence. We must consider every possibility and with that I present: the tubular (or transit) environment.

Take for instance the following:

On April 12, 1984, four armed individuals reached Ashdod, Israel, where they boarded an Egged Bus No. 300 en route from Tel Aviv to Ashkelon with 41 passengers. After lengthy negotiations, a Special Forces unit of the Israel Defense Forces (IDF) stormed the bus on April 13, while shooting at the hijackers through the vehicle’s windows.

During this takeover operation the soldiers were able to eliminate two of the hijackers, capture the other two hijackers and release all hostages except for one passenger. Seven passengers were wounded during the course of the operation.

Another example is the London bombings on July 7, 2005, a series of co-ordinated suicide bomb attacks on the city’s public transport system.
All of these incidents are examples of tube environments: planes, trains, tunnels and buses.

Over the years there have been numerous well-documented incidents involving the above environments. This is cause for concern, in my opinion, as law enforcement seems to concentrate the bulk of our training for high-risk active threats inside of structures. That is not to say training is not conducted in the tubular environment, but in my humble opinion, this doesn’t happen as much as it should.

This article is going to concentrate on the most likely event a patrol officer may face: a hostile incident on a bus.

A basic understanding of the linear assault concept

Why are buses an extremely fruitful target? They offer the adversary the potential for a large group of hostages, and depending on the hostages, it can be extremely media worthy. There are ample buses and routes to pick from; school, commuter and senior rides. From a tactical standpoint, having a mobile, elevated platform (depending on the type of bus) means a hostile can have a 360-degree field of view, limited entry points and a confined linear environment.

The potential for a hostile terrorist takeover of a bus definitely exists, but a common type of incident that is more likely (and quickly deteriorates) is: a distraught man or woman involved in a violent domestic or someone who is suicidal. This one incident can go in many directions.

Whether or not the hostage-taker wants potential hostages can quickly determine how the incident can escalate. The standard for just about every agency is to bring out the specialists — negotiators and tactical teams, with an average response time of one hour.

A lot can happen in that hour: The situation can be resolved, it can go mobile, hostages can be released, or hostages can be killed. If any of this occurs prior to the specialized units arriving, it is up to the patrol officers on scene to mitigate and resolve the incident. It is because of this longer response time that we need to continue to give patrol officers on the streets some basic to advanced level of training in the area of linear assaults, specifically buses.

One of the most important things that can be done, regardless of the need to take immediate action, is to immobilize the bus. A moving bus is impossible to assault and mobility creates an inordinate amount of problems. All buses have a power cutoff. It is typically located somewhere on the exterior and cuts the power to the engine. Understanding how the bus operates and where its mechanics and panels are located will help officers to better understand how to stop it.

Another way to immobilize the bus is by using other vehicles, or natural and manmade barriers: trees, jersey walls, buildings, etc. If you have a barricade situation, set up your perimeter per your agency SOP (standard operating procedure) and protocol. As stated previously, the adversary has the potential for a 360-degree field of view; this is a benefit to him/her, but also to you as well.

Depending on the level of window tinting on the bus, you should be able to gather intelligence for the incoming units and for yourself. Clearly one of the big questions is: “How many adversaries are there and how many victims/hostages?” Assessing whether there are any injuries, the type of demographic on the bus — if there are children or elderly on board, for example — is also important.

The more intelligence you can gather the better you are. What type of bus is it? Contact the manufacturer and find out what type of glass the windshield and windows are made of. Is it laminated, safety glass, bullet-resistant glass or double pane? You may not have much use for this information, but the snipers deploying could make good use of it.

What happens if, while waiting for the specialty response, or before you even get the opportunity to call them, the situation rapidly declines and you are forced to take immediate lifesaving actions? You have to assault the bus. Have you ever trained for it? Have you even ever been on a bus?

I would not begin to attempt to write about how to assault a bus, but what I will say is this: you have to gain control of the bus and gain it quickly. The driver must be controlled, friend or foe — if they panic and do something with the bus, it can create many problems for all involved.

Also keep in mind, you are assaulting a tube, so unless you are the first person down range, you will be behind someone. Ultimately, you will need to have perfect muzzle discipline because there will be many frightened people on the bus. There is a lot to contend with.

As patrol officers, you already have a ton of responsibility and we know you go to a ton of training. Some classes you want to go to, and some you probably are forced to go to. I think it is necessary for all patrol officers to have a basic understanding of the linear assault concept, especially how it applies to buses.

My suggestion is to simply go out to your bus yards, walk around the buses, go inside, talk to the drivers and find out which doors lock, which don’t. Ask how they open, if they are hydraulic or mechanical. Get inside, walk down aisles and see how well you can move with all your gear on.

The next thing I suggest is to contact your tactical team or the team that serves your area, and ask them if they would give you some training on what they do for linear assaults. I am confident they would be more than willing to assist you.

We live in a time of ever-changing threats, which means ever-changing demands placed on us. It is imperative that we maintain a high level of skill and expertise in our law enforcement profession and stay one step ahead of the next adversarial element.

For the past 15 years, Michael Soden has served with Prince George’s County Police in Maryland, U.S., and is currently a lieutenant. He is also a police instructor, the owner of Gladius Training and he teaches privately overseas.
Print this page

Related
Active Threats: Are you prepared? • WEBINAR
A common theme: Navigating the crisis in the negotiation
Monitoring hate speech as a law enforcement tool
The mental health impacts of training and decision-making