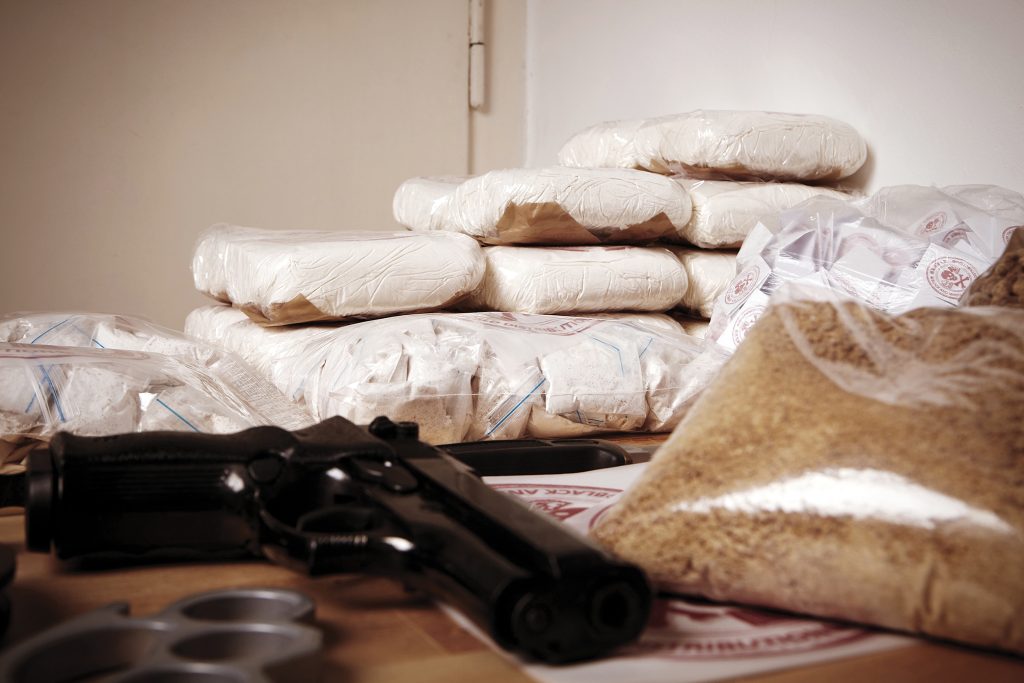 Combatting the challenges of OCGs across the country

Organized crime poses many challenges for members of law enforcement. The threat that organized crime groups (OCGs) pose to the general public comes in a variety of ways, including their infiltration of the public sector, private sector involvement, criminal enterprise, and their use of violence. Over the past few years, OCGs activities may have shifted to adapt to the pandemic, but their goal remained the same: to make money.

OCGs during the pandemic

OCGs in Canada focus mainly on drug trafficking, firearms and financial crimes, with cybercrimes becoming increasingly prominent, said the RCMP’s Robin Percival. The COVID-19 pandemic didn’t have a big impact on OCGs, but it did cause them to adapt their operations. OCGs quickly started producing counterfeit N95 masks, hospital ventilators and COVID test kits. In diversifying their criminal involvement and exploiting alternate venues, the OCGs continued to thrive.

When it comes to organized crime and the pandemic, members of OCGs didn’t fear or adhere to COVID-19 restrictions, said Supt. Steve Watts, unit commander of organized crime enforcement at the Toronto Police Service (TPS). When looking at the closed land border between the U.S. and Canada, Supt. Watts and his team saw a slight change over the last two years. “There has always been a high volume of firearms and illicit contraband coming into Canada through land-based border points, so with less traffic coming through those borders, there may have been a small effect on their activities.”

Robert Whalen is a retired detective who served with the TPS for over 30 years and spent a considerable amount of time responsible for the coordination of criminal response to unlawful activity related to criminal organized crime. He said that even with the land border closed, “with investigative resources such as Health Canada and Border Services stressed to the limit, OCGs may have actually found it easier to import illicit drugs.”

The 2021 Public Report on Organized Crime in Canada stated that a key question for senior law enforcement decision makers is to decide what issues matter most and where resources should be allocated (see reference 1).

Each law enforcement agency creates units and teams and allocates their resources to combat organized crime in a way that suits their specific community’s needs. The TPS has a dedicated organized crime enforcement (OCE) section with numerous units contained within it. Supt. Watts said these sub-units span everything from complex gang investigations, firearms and controlled substances to fugitives, parole offenders and more. From there, these units are further broken down. For example, the Integrated Guns and Gangs unit includes street enforcement teams and centralized shooting response teams.

The RCMP focuses its investigative efforts on the criminal activities of groups and networks, rather than specific commodities, said Percival. Organized crime seeks to make a profit whenever and however it can. New organized crime trends will always surface if there’s money to be made from the activity.

One important strategy being used to stop organized crime groups is partnering with other agencies across the country. The RCMP has implemented a national investigative strategy in partnership with the Canadian Border Services Agency (CBSA), Canada Post, Health Canada and municipal, provincial and international law enforcement agencies. There are several key activities these partnerships focus on, including gathering information and data to identify shipping and manufacturing trends, international exporters, domestic distributors, clandestine labs and criminal networks, collaborating with international partners to combat illegal drug trafficking networks and disrupt the flow of fentanyl into Canada, and coordinating information sharing between partners, said Percival.

Through CIROC, Canadian law enforcement agencies can work together in an integrated response to reduce crime and keep Canadians safe from the damaging effects of organized crime.

When speaking with the TPS, a trend they are seeing is the migration of organized crime groups into the rural areas of central and northern Ontario. This has been happening over the last few years. Because of this, the TPS has undertaken “Joint Force Operations”, where they have partnered with the RCMP, CBSA, OPP and multiple law enforcement agencies in different municipalities. They have effectively partnered in a variety of different areas, including firearms and drugs.

The TPS also partners with a group called FINTRAC, which is the Financial Transactions and Reports Analysis Centre of Canada. This is important in the law enforcement world because FINTRAC assists with the investigation and detection of illicit money in relation to organized crime, which is all about making money illegally, Supt. Watts said.

Overall, organized crime is successful is because they are, simply put, organized. Ret. Det. Whalen said the main reason OCGs seem to be ahead of law enforcement is because these agencies have not become organized with the public. “Public Private Partnerships (PPPs) are needed to combat this. The private industry has amassed large amounts of intelligence on OCGs that they are more than willing to share with the police. In turn, police need to dedicate more resources and attention to working with these groups to combat organized crime,” he said.

Organizations that are out there ready to help are those like the Loss Prevention Advisory Committee sponsored by the Retail Council of Canada, the Retail Loss Prevention Group and the Canadian Anti-Counterfeiting Network. An organization in the U.S., the Intellectual Property Crime Center, focuses on being a hub of all information, training and resources for organized intellectual property crime in the U.S. Whalen hopes Canada will soon have a centralized hub of their own to help officers combat organized crime.

When speaking about gangs and rivalries, Supt. Watts has seen his fair share in Toronto. “The city has very established gang rivalries, but it’s not like what’s depicted in the movies.” Canada is a very multicultural and diverse country, so gang rivalries aren’t necessarily between different ethnicities and cultures. Today’s OCGs and gangs are very diverse, always changing, and adaptable in their makeup. “They follow the acronym MOE: money over everything. It doesn’t matter what your background is, as long as you can contribute financially through your actions and criminal activity involving illicit contraband, you’re in.”

The biggest challenge when dealing with OCGs in Canada is the multi-level “business” that OCGs are involved in, said members of the Ontario Provincial Police (OPP). “OCGs are often involved in a variety of criminal enterprises, which can be a challenge to frame in a single indictment. There are also legal complexities when it comes to large-scale investigations.”

To Ret. Det. Whalen, the main challenge is manpower. All police services are stressed to their limits, and with this stress comes the reality that they must focus their efforts on crimes that effect the health and safety of individuals. However, the majority of organized crime is related to making profits. “We must task ourselves with sharing information with each other. That one piece you have might be the one piece that another officer needs to solve the puzzle,” he said.

One of the greatest challenges in larger cities like Toronto, Montreal and Vancouver is the increased access to firearms. Supt. Watts has been working the in the OCE section for the majority of his career, and the prevalence and access to firearms has been steadily increasing.

Federal, provincial and municipal law enforcement work collaboratively with the CBSA to address the challenge of the cross-border interdiction of firearms and drugs at the border between the U.S. and Canada. “The reality is, we need all the above involved partners and the continuing assistance of the community, and they need to be an essential part of the solution to gun violence,” said Supt. Watts.

Another challenge law enforcement is faced with is the large portion of youths that are involved in gang violence, either as the person of interest or the victim. Watts continued, “It’s upsetting to hear when a young person is involved in these types of incidents. We need to be reaching these kids at a very early age—long before they’re teenagers—and provide them with positive opportunities and life skills. Providing education and, when the time comes, proper and equitable employment opportunities to help mitigate this complex socio-economic situation.”

A key to combatting organized crime in Canada is law enforcement raising awareness in the communities they serve. The RCMP’s Federal Policing Strategic Engagement and Awareness team has developed and disseminated multiple products to raise awareness of national security, or organized criminal activities, such as the Reporting Suspicious Incidents to Police Guide (see reference 2).

In the TPS Gang Prevention Task Force, there is a program that deals with marginalized communities where relationships are then built through town hall meetings. Officers find opportunities for social intervention and conduct community outreach efforts. The TPS has also identified highly impacted neighbourhoods and neighbourhood community officers (NCOs) are embedded within these specific communities. “These NCOs establish solid lines of communication and relationships with community members, building trust over time, and it ultimately results in deterrence and prevention of violent crime in that particular neighbourhood,” said Supt. Watts.

Ret. Det. Whalen stresses the importance of the media as a tool to raise awareness. “We as law enforcement have a love-hate relationship with the media, but we must work as a team to help educate the community. We need to stop future crime by showing its links to organized crime. Let the community know when a crime might be linked to OCGs and show them the effects of organized crime—child exploitation, human trafficking, drugs and gun violence. Also show them the side of organized crime where people lose their homes due to fraud, and loss of jobs due to businesses unable to suffer the losses.”

The OPP also utilizes social media in partnership with CIROC and Crime Stoppers to promote education campaigns regarding different organized crime topics. For example, these can include campaigns focused on reducing purchases of Outlaw Motorcycle Gang (OMG) merchandise, in an effort to educate the public on how purchasing merchandise can further the criminal activities of OMGs.

Organized crime is not just the traditional Hollywood portrayed criminal and crime. Gangs must meet certain financial thresholds each day to remain in the gang. Organized crime is focused solely on financial endeavours through the sale of illicit drugs and firearms. Gangs are not dictated by racial background. Law enforcement agencies need the help of all others across Canada and need to focus on public private partnerships.

The OPP suggests that law enforcement members who are interested in combatting organized crime should actively seek training opportunities in the areas of: confidential informant handling; interviewing techniques; physical surveillance and electronic surveillance; drafting of Judicial Authorizations; and major case and file management. “Never stop learning and seek the mentorship of experienced members involved in organized crime investigations and begin to develop a network of relationships inside and outside your organization, as these contacts will become critical to your future success as an organized crime investigator.”