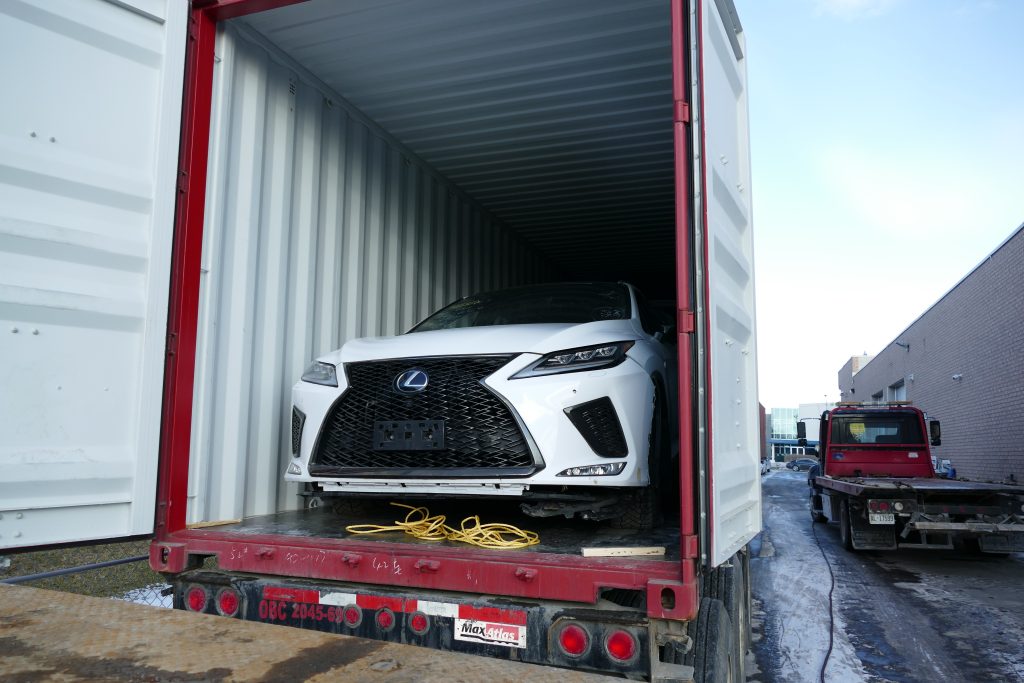 A stolen vehicle recovered during Project Majestic, a joint-forces operation with PRP and TPS, that concluded in March 2021. The DRPS, the CBSA and the Équité Association also provided assistance during the investigation. Photo credit: York Regional Police

As auto thefts continue to rise across Ontario, more than 2,000 vehicles were stolen in York Region in 2021. This was a sharp increase from the 1,417 vehicles reported stolen in 2020 and the 1,384 reported in 2019. Both the volume of thefts and the sophistication of the criminals presented a challenge for the York Regional Police (YRP) Auto/Cargo Theft Unit.

In 2019 and 2020, sport utility vehicles, specifically Lexus, Toyota and Honda SUVs, were the most sought-after prize for car thieves. However, in 2021, there was an influx in thefts of Ford 150 pickup trucks and a larger trend toward indiscriminate thefts of all vehicles with push button ignition systems. Demand for stolen vehicles has been driven by production delays caused by a worldwide semiconductor shortage, which has made new and used cars both harder to find and more valuable.

Thieves are using advanced technology to steal vehicles, sometimes gaining entry through crude tools like screwdrivers, but once inside a car, thieves connect an electronic device to its onboard diagnostics computer and program the vehicle to accept a new key they have brought with them. Once the vehicle accepts the new key, it’s started and driven away. These thefts can be completed in about a minute.

To stem the increase in auto thefts, YRP spent 2021 targeting theft groups operating in Ontario and Quebec. These highly organized enterprises include spotters who identify vehicles for theft, the vehicle thieves themselves and transporters who either drive the cars or send them by rail to the Port of Montreal. Once the cars arrive at port, they are loaded onto ships and delivered to buyers overseas.

To stop thefts before or as they happen, investigators worked hand-in-hand with the uniformed officers on patrol in residential areas in each of YRP’s five districts. ACTU requested district officers working in these areas during the peak theft periods, between midnight and 5 a.m., to identify and report to them suspicious activity that could be a theft in action or lead to a theft.

YRP’s stolen vehicle seizures and arrests related to auto thefts have increased since 2019.

When going after theft groups, ACTU members committed significant resources to large investigations. In the past, YRP targeted rashes of thefts on a more ad-hoc basis, tackling incidents through smaller investigations. However, the sheer number of thefts they encountered in 2021 and the improved sophistication of theft groups required larger-scale investigations that target the operations of these groups at every level. This approach taught YRP to be patient. Their goal was and remains to disrupt organized crime groups, so if acting on information too early prevents this, then holding back on executing search warrants or carrying out arrests until they have ample information is the right decision.

The ACTU also owes its success to co-operation with policing partners. YRP works extensively with Peel Regional Police (PRP) and its Commercial Auto Crime Bureau and have established a strong cross-service network of information and resource sharing. During their 2021 investigations, the YRP unit also collaborated with the Toronto Police Service (TPS) through its Auto Theft Suppression Project and the Durham Regional Police Service (DRPS) to cast a wide net over the Greater Toronto Area.

In addition to making the most of tightknit partnerships with other GTA police services, YRP worked with authorities in Quebec to execute search warrants in Montreal, where vehicles ended up before being shipped overseas, and they leveraged the resources of the Royal Canadian Mounted Police, the Canada Border Services Agency (CBSA) and the newly formed Équité Association to extend their capacity across Canada and the globe.

Despite the success in 2021, YRP knows they cannot afford to be complacent. Thieves are using increasingly advanced tools and strategies to steal cars and organizing themselves in more efficient ways to get stolen goods to buyers. To meet new challenges posed by criminals, YRP’s ACTU will continue its commitment to investigative excellence and the execution of large and ambitious investigations. They will continue working with their uniformed officers to stop thefts before, or as, they happen and lean on their law enforcement and civilian partners for support in order to ensure we disrupt and dismantle these organized theft groups.