Waterloo-based Guard-Ex, an impairment screening device startup company founded by participants in the Schlegel Centre for Entrepreneurship and Social Innovation’s LaunchPad incubator at Wilfrid Laurier University, has raised a $1 million CAD seed round. 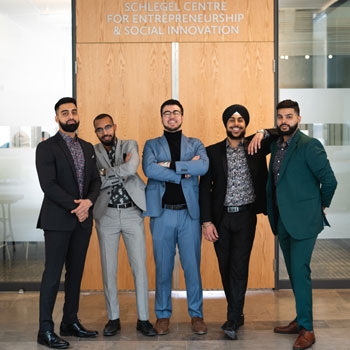 As opposed to traditional impairment screening methods, Guard-Ex takes an innovative approach by using physiological indicators such as eye movement and body temperature, rather than measuring chemicals from saliva or breath. Guard-Ex has developed a universal impairment screening device with the help of machine learning to screen for real-time impairment. Guard-Ex automates the manual process that is conducted by law enforcement officers today.

Sole investor, Bob Schlegel, is a CPA and 1972 graduate of the economics program at Laurier’s Lazaridis School of Business and Economics. Schlegel is founder and chief executive officer of Schlegel Capital and Pavestone Company’s Bedrock Logistics in Dallas, Texas, and a longstanding donor to Laurier. He provided the initial funding for the centre in 1998. The Schlegel Centre for Entrepreneurship and Social Innovation officially opened in 2003 as the first Canadian centre of its kind.

“From the first time I met with the student founders of Guard-Ex, I was incredibly impressed,” Schlegel said. “In my career, hundreds of companies have pitched to me and I’ve invested a lot of money over the years. But these guys are unlike anyone else. They are filling a market need that is critical to the safety and welfare of Canadians. They are smart and driven and I know they’ll do well. I am thrilled that they are being coached and mentored in the Schlegel Centre’s LaunchPad incubator.”

According to Guard-Ex, every year nearly $30 million tax payer dollars are spent by the Canadian government on people contesting impaired driving charges due to lack of evidence. With the legalization of cannabis, this situation is expected to increase.

“We are excited to close our seed round with Bob Schlegel, allowing us to intensively speed up our product development and research to hit the market sooner than projected,” said Khan, CEO of Guard-Ex.

The Guard-Ex founders are looking to complete their prototyping and commercialization process within the next year. They are working with the Laurier Centre for Cognitive Neuroscience and University of Waterloo’s School of Optometry and Vision Science. They have also presented their prototype to the Ontario Association of Chiefs of Police and are working on getting signed MOUs to conduct a pilot program to test their device roadside.

“We are so proud to work with and support the student founders of Guard-Ex,” said Laura Allan, assistant professor in the Lazaridis School and executive director of the Schlegel Centre for Entrepreneurship and Social Innovation. “They are making an important and impactful difference in the community and the country, and we look forward to helping them commercialize their product to make the roads safer for all Canadians.”