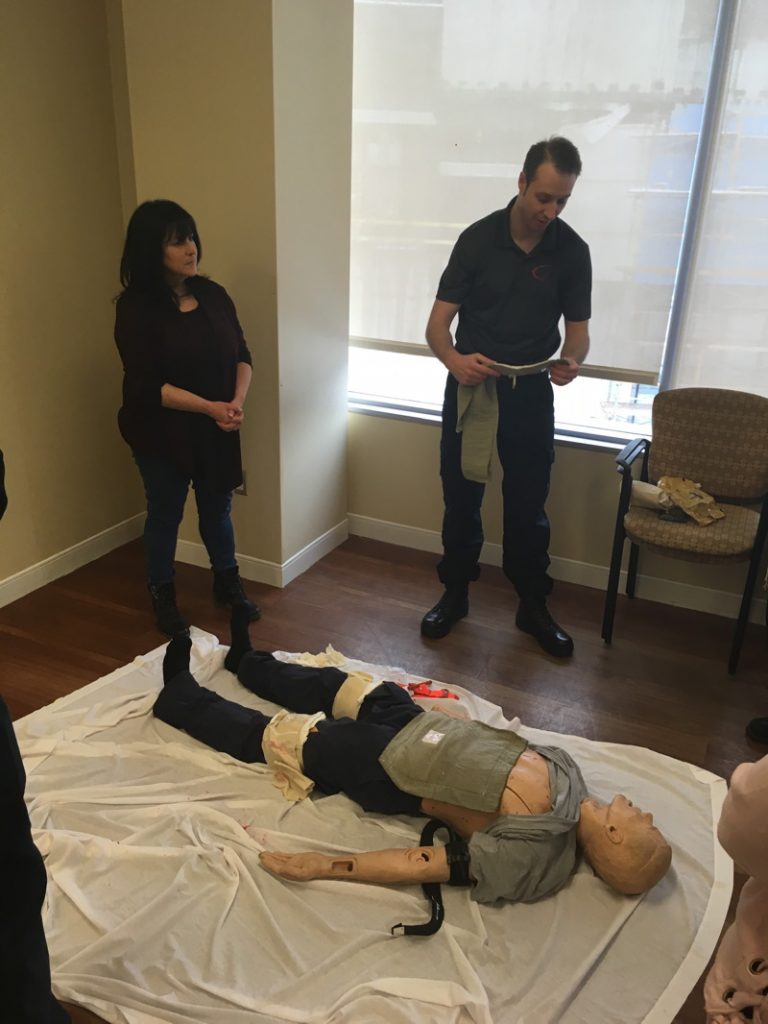 Canada has a reputation abroad and a perception at home of being an open and accepting country. But a shooting at a mosque in Quebec City in January 2017, which claimed six lives, was a painful reminder that violence against religious communities is a threat in Canada.

The danger faced by Muslim institutions was put into sharper focus by horrific violence at mosques in New Zealand this March. Jewish communities meanwhile have been put on edge by recent attacks on synagogues in California and Pittsburgh. For communities at risk of this insidious breed of violence, preparing to mitigate and prevent attacks has become a sad reality, as has dealing with a rise of hate crimes in general.

According to Statistics Canada, police-reported hate crime in Canada spiked in 2017 — 2,073 incidents — up 47 per cent over the previous year.

StatCan’s data also comes with the caveat that it includes only incidents that are reported, and is dependent on police services’ ability to identify hate-motivated crimes. The true numbers and the true extent of the problem remain unknown.

“We know that there’s been a pretty sharp uptick of hate incidents and hate crimes against the Muslim community in Canada, and it’s something we’re paying close attention to monitoring,” says Mustafa Farooq, executive director of the National Council of Canadian Muslims (NCCM), a national Muslim advocacy group.

Ryan Hartman of the Centre for Israel and Jewish Affairs (CIJA), a national Jewish advocacy group, says that the threat level is currently low for Canadian Jewish people, but “the trends that we are monitoring are demonstrating an uptick in nefarious activity targeted towards the Jewish community.”

Right-wing extremism is also on the Canadian government’s radar. In late June — for the first time — it placed two right-wing extremist groups on its national list of terrorist organizations: Blood & Honour and Combat 18.

Phil Gurski, president and CEO of Borealis Threat Risk and Consulting, is a former CSIS analyst with expertise in terrorism. He sees the threat from white nationalists in Canada mostly coming in the form of “intimidation and bullying,” and says that we haven’t experienced the level of violence seen in the U.S. or certain European countries — and probably won’t any time soon. However, Gurski says the far right does pose a violent threat to Canada, and that the threat can always get bigger.

When it comes to guarding against violent expressions of white nationalism and other forms of hate, Farooq says NCCM takes an active role. “We’re often reaching out to mosques. We have a community safety guidebook, which we provide to mosques to help them figure out best practices, to ensure safety,” he says.

The guide book, beyond advocating for a proactive approach to safety — which includes reporting suspicious activity and hate incidents to law enforcement immediately — lays out some tips for improving mosque security: securing doors and windows; trimming heavy exterior vegetation that attackers may hide in; installing floodlights, alarm systems and security cameras; developing lockdown procedures; posting members of the congregation at entrances during prayer times; and requesting additional police patrols.

NCCM’s Farooq says working with local police services can be particularly helpful: “many of whom I’m sure are more than comfortable to come in and provide recommendations about the best ways to keep places safe.”

Paul Corrigan, sergeant in charge of Hamilton Police’s Hate Crime and Extremism unit, says, “We would get our guys to come out and do a complete look around the whole building first.” The CPTED team would then potentially make recommendations for changes, such as how parking can be better organized, along with suggesting erecting barriers to open, vulnerable areas.

However, Corrigan also recommends institutions reach out to the private sector as well. “Those people can advise them in ways that we can’t,” he says.

Adam Cohen, founder and CEO of Montreal-based security consultancy Perceptage — which offers services to a diversity of religious institutions — says that for organizations looking to improve security, they need to make use of their own people. He explains, “The only way to harden a place without making it look unwelcoming and uninviting is by using your own internal resources. That’s also the only way to bring down costs. I don’t know of many small street corner churches, mosques or synagogues that can fund security guards 365 days a year.”

Also, Cohen says that security guards don’t know the communities they are protecting. “But an usher or greeter is usually someone who grew up within that congregation. He knows his community. He knows his environment,” he says. Cohen explains that a person who looks suspicious to a guard may be a trusted congregate, while someone who looks innocuous to the same guard could be a known troublemaker. “So, I always tell institutions, ‘you can afford security guards, good for you, put them at the door, but always accompanied by one of your own.’”

Cohen also warns institutions not to fall into the trap of racial profiling. “You’re doing yourself a disservice. By having a certain fantasy of what your enemy looks like, you don’t see other threats that don’t look like what you imagine them to be,” he says.

Congregation Shaar Hashomayim, a Montreal Jewish community centre and synagogue, recently used SIP funds to improve surveillance. The organization’s chief financial officer, Eric Amar, says, “We installed high-resolution digital cameras throughout the organization…We already had external cameras, now we have internal cameras also, so we have eyes throughout the organization to see what’s going on, and we have digital security.” He explains that before the SIP grant, “We had analogue technology which was some seven, eight years old, and we changed, and we’re looking to stay head of the curve.” Amar continues, “People feel a lot more secure.”

“This program (SIP) has proven an extremely valuable resource for the Jewish community and other at-risk communities,” says Steve McDonald, CIJA’s director of policy and strategic communications. “But, at the time the program was originally established (2011), the threat landscape was entirely different. Community institutions that were once primarily concerned with hate vandalism and arson are now exploring the need for lockdown procedures and active shooter training.” He explains that the government has been responsive to needed changes over the years by expanding the SIP’s budget, broadening the list of equipment and infrastructure that can be funded and, as of this spring, providing up to $10,000 for emergency training for staff, which McDonald calls “life-saving.”

The CIJA provides free security training with its own program, in partnership with the Jewish Federations of Canada. The National Community Security Program (NCSP) teaches synagogues and other Jewish institutions lockdown procedures, identifying security vulnerabilities, recognizing and reporting threats, recognizing and responding to explosives, and trauma first aid. CIJA’s Hartman, who is the director of NCSP, says the training builds confidence and self-reliance for volunteers and staff at institutions.

Perceptage’s Cohen assists with SIP grants as well, along with requests for proposals (RFPs) for technology, helping institutions discern the difference between technology at different price points and pick out the best contractors.

Cohen says when it comes to purchasing and integrating technology, being smart about how it is installed and used is essential. He explains that cameras won’t help if they are in ineffective places — too high to capture faces for example, or in the glow of a streetlamp — and they won’t have any deterrent effect if they aren’t monitored 24/7.

In particular, institutions shouldn’t underestimate the power of a locked door, says Cohen, who explains that in active shooter events, attackers are trying to do as much damage as possible as quickly as possible, and aren’t likely to waste time breaking down a door. “It’s just to be able to delay this person and make them leave wherever you are,” he says.

To prepare for active shooters, Cohen’s lockdown training starts with an assessment of whether doors and windows are secure enough, and whether there are enough safe rooms in an institution. He says, “I always tell the leaders of those institutions, ‘Don’t let me come and talk to your staff about active shooter and lockdown before you fix those problems.’” To further address lockdowns, “inside, put some sort of mass notification system, a pre-recorded message — something that will allow a person on the inside to press a button and then a mass notification system tells people, we’re going to lock down,” Cohen says, noting that training members of the congregation to guide people to safe places is critical too.

Amar says at Congregation Shaar Hashomayim, staff security training — that they carry out with the help of a consultant — is their top priority. “You can never be lax about it,” he says.

While having smart security practices and effective training and technology can better prepare religious institutions for threats ranging from harassment and vandalism to the unthinkable, building strong partnerships is also an important piece of the puzzle.

Hamilton Police’s Corrigan says his service has very good relationships with the various religious communities in the diverse Ontario city. “We’re in constant contact with the leaders in these communities to say, anything you want, just let us know,” he says. Corrigan explains further that they will automatically step up patrols for religious sites during holidays, special events and busy prayer times, as well as ensure officers get out of their cars and physically check on institutions. “They get up and engage with the people and it makes people feel safer,” he says.

Amar agrees, explaining that cross-faith co-operation is important for his organization. “We want to share experiences, good ones, bad ones, learning whatever we need to learn from each other’s mistakes and each other’s successes, so we share information very openly,” he says.

Farooq says that at-risk communities can find support from the rest of their neighbours too.

He uses the example of a recent rash of vandalism at a mosque in Owen Sound, Ont. He says, “The community of folks in Owen Sound really stepped up to protect the mosque and protect their Muslim neighbours. That’s the kind of thing we know the vast majority of Canadians want to do, to stand up for everybody, and ensure our country stays safe for everybody.”

This story was featured in the Summer 2019 edition of Canadian Security magazine.


Related
Robots roll out
Monitoring hate speech as a law enforcement tool
Dogfighting, the investigation: Part two
How an online subculture has led to violence against women