Features Photo Gallery
Collaborating against counterfeiters: Insight from the 2017 Fraud and Anti-Counterfeiting Conference

At the 22nd annual Fraud and Anti-Counterfeiting Conference earlier in December, law enforcement and private industry came together to discuss the problem of counterfeiting, identify tactics to pursue against counterfeiters and new resources, and learn how to work together to protect Canadian industries. 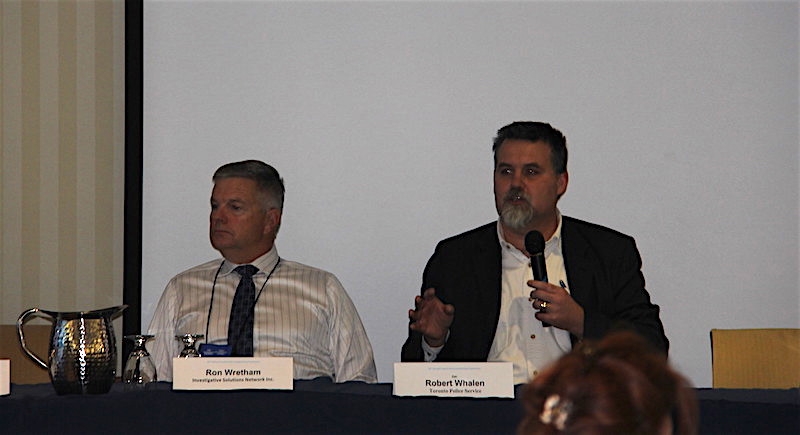 From left to right: Ron Wretham and Robert Whalen.

On the last day of the conference, Det. Robert Whalen, from the Toronto Police Service, 55 Division, and Ron Wretham, president and COO, Investigative Solutions Network Inc., discussed what law enforcement, prosecutors and industry can do to help one another.

They focused specifically on the process of obtaining and executing search warrants, testifying in court, seizing evidence and providing proper disclosure.

Whalen began by explaining what he needs from private industry to obtain a search warrant.

First, he needs background on the individual, whether lawyers had served him or her before, if there had been complaints, etc.

When investigating a potential counterfeiter, he also requires surveillance. In Toronto, he explained, the police have a mobile support unit that does surveillance.

He also suggested that private industry can buy and send counterfeit products and provide evidence to the police.

“We as police are sort of tied in with a lot of red tape if we want to put an undercover into a particular location,” he explained. Police have to fill out reports and arrange a backup team just to send someone into a store.

In contrast, private industry does not face the same constraints. They can buy counterfeit products, and provide police with authenticity reports, photos of the products, etc.

Additionally, private industry, law enforcement and prosecutors can work together when executing a search warrant.

For example, Whalen and Warthem worked together to make multiple arrests and confiscate counterfeit products at the Pickering Market.

Before working with private industry, Whalen explained, he had to bring in 20 or 30 police officers and two or three security guards to confiscate counterfeit product at flea markets.

In contrast, with private industry’s involvement, only two or three officers were needed.

“Things have flipped and now we, as private industry, are doing a lot of the heavy lifting and providing resources,” Wretham elaborated.

With 15 members of private industry and only four police officers, they came to Pickering Market and executed 30 search warrants.

The group went into Pickering Market when it was closed. The police broke the locks on the booths, and one police officer supervised as industry members took the counterfeit products. They then took pictures and samples of what they needed, and a team came in to bag it.

“Another police officer was by the truck outside and he was on the computer with a representative from our firm,” Wretham elaborated, “and he was logging every bag that came out and every sample that left the premises. It was checked by us and by the police.”

Once they had gone through a booth, the police officer would seal it and put a new lock on it.

After this experiment, industry and police have followed this example. Additionally, Pickering Market changed its contract with vendors to specifically prohibit the sale of counterfeit products, on penalty of eviction. Ultimately, police arrested five vendors and cautioned the other 25.

“That was an example where industry did all the heavy lifting and the police said, ‘We will do this again,’” Wretham said.

From left to right: Ron Wretham and Robert Whalen.