Features
2017 Horizons: From drones to smart cities to cyber security and more

As is tradition, SP&T News is once again cracking open the year ahead and shining the light on upcoming trends in the industry. This time we pegged a number of experts in the field to see which directions CCTV, drones, cyber security, smart cities and the integration services business are all headed. If we can be certain of anything, analytics, cyber threats and hardware price erosion are all here to stay. 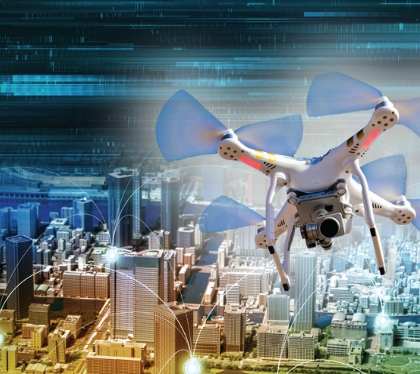 Drone-ing on
David Cooke, a former military pilot, was flying one of his drones along the harbour in Sarnia, Ont. one evening to get a shot of Chemical Valley’s flares and lights — for artistic purposes — when he had a run-in with security.

“The security company from one of the refineries came by and asked what I was doing,” he says. “They said you can’t fly over the industrial plants and I said I wasn’t and showed them on my display exactly where I’d been flying… And a few weeks later the head of that company, Lyndon Security, called me and asked for a meeting. Then, we began working together.”

For Cooke, founder and chief pilot at Canda, which provides drone video and photos services, and is a holder of the Special Flight Operations Certificate from Transport Canada, drones hold numerous possibilities for security, from monitoring fence lines, roofs and solar farm equipment, to tracking materials in storage bins.

“For a security firm, when they can subcontract the actual flying part of drone work, it’s a serious asset to them, not a threat,” Cooke says. “Some of these machines can cost $50-60,000 and then you have to train somebody and keep the crew qualified with the certificate from Transport Canada.”

According to Cooke, it’s the cost of drones that will be the hot topic in 2017.

“In order to fly commercially for surveillance and security, [companies will] often be driven towards compliant drone machines but I think the new trend will be a drive towards smaller and lightweight, less-restrictive machines… like the DJI Mavic Pro I just bought, the size of an iPhone 6 or so… It’s perfectly legal to fly but won’t cost them as much.”

The overall message is that drones don’t need to be an expensive process and you don’t have to own the asset, Cooke explains.

Oliver Philippou, a senior technology analyst with IHS Markit Ltd. in the U.K., says drones and how they will be used in security is an issue on his radar, too.

“Large integrators seem very well placed to use this type of application and a large number of them already have monitoring contracts, such as Johnson Controls and Securitas,” he says, noting he anticipates drones as a “force multiplier for man-guarding and alarm monitoring” will be something that doesn’t pick up until after 2017.

Changes in rules coming down the pipe for unmanned aerial devices in Canada will mean more opportunity for the security companies that are toying with the idea of using this technology for remote patrols and more, says Mark Aruja, chairperson at Unmanned Systems Canada, referring to the pending approvals to operate drones beyond visual lines of sight.

“This means the difference between flying a drone around your house and now using it to inspect a pipeline that runs down the Mackenzie River Valley for thousands of kilometers, so it’s a huge thing for the industry, with global implications,” says Aruja.

There is “an incredible” drop in price and an increase in performance of commercial technologies, Aruja adds, such as camera payloads and “radar payloads — that enable all kinds of security applications”, like monitoring for hydro companies, pipelines, etc. He says he sees the opportunity picking up for environmental monitoring, RF surveys and heat mapping.

For more from this story, see the original article here.

This article originally appeared as the cover story for the January/February issue of SP&T News.
Print this page