Features
Twenty years after an in-line-of-duty death: Reflections from a police spouse 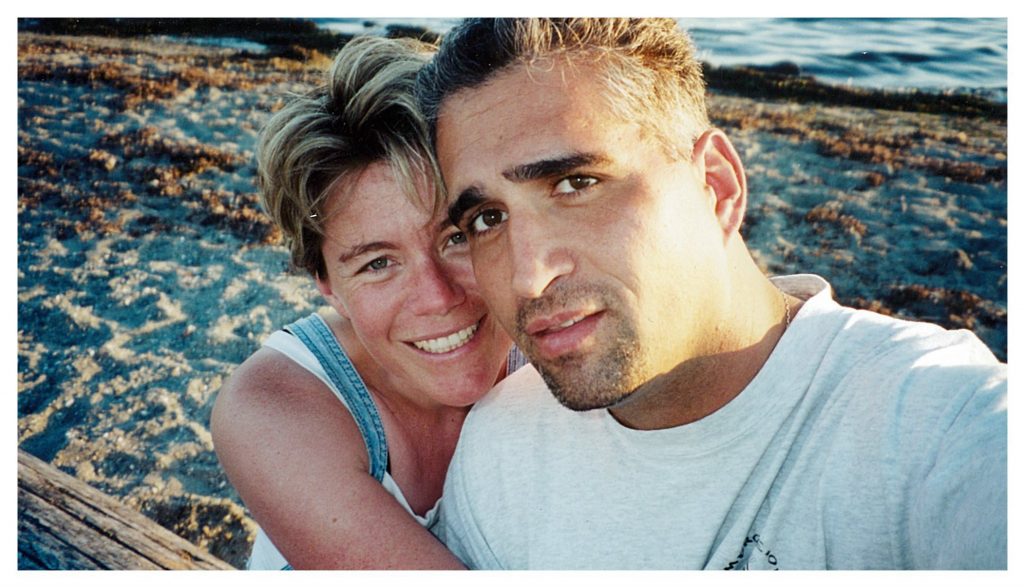 John Petropoulos was born on May 13, 1968, in Calgary, Alta. He graduated high school from Ernest Manning, then obtained his Diploma in Criminology from Mount Royal College. After that, he moved to Abbotsford, B.C. to earn his Bachelor of Arts in Criminal Justice in 1995.

The four years John and I spent in Abbotsford were an awful lot of fun. While going to university, he was a server at a Greek restaurant (I still have the little blue bow tie he had to wear) and was, understandably, a rock star hit with the female customers.

After graduating from university, he worked in corrections. And then the day came, in 1996, when he finally got the call from the Calgary Police Service (CPS) recruiting department. He wasn’t home when the call came in (this was before cell phones), so they left the message on our answering machine. When John heard the news that he had been asked to join CPS, he was so excited he dropped to the floor and rolled around on his back, laughing and kicking his feet in the air.

Never in the 12 years we were together had I ever seen this type of excited reaction from him (he was usually one cool cucumber). But in that moment, he let his happiness show… becoming a police officer for CPS had been his dream and he had been seriously pursuing it for 8 years.

From John I learned the perseverance, persistence and patience necessary to achieve goals.

John loved being a police officer. It truly was his passion… and he was very good at it. In four short years he was at CPS, he accomplished a great deal on the job. John also enjoyed golfing. But I think the hobby he enjoyed most was watching TV (Monday Night Football, Seinfeld, Law & Order, The Simpsons). He loved going for beers with his buddies. He loved his family and his Mom’s homemade pizza. And he loved hanging out with me and our dog, Sable.

On Sept. 29, 2000, John died in the line of duty. He was investigating a break and enter complaint when he stepped through an unmarked false ceiling, fell nine feet into the lunchroom below and succumbed to brain injuries. There was no safety railing to warn him of the danger. The alarm turned out be false; there was no intruder in the building.

To say I was devastated is an understatement. I lost my husband, best friend and soulmate that day… all because of a missing safety railing. Thankfully, I wasn’t alone in questioning the fact that his fall could have easily been prevented.

After his death, several of John’s recruit classmates – Cliff O’Brien, Joel Matthews and Glenn Laird – set up the John Petropoulos Memorial Fund (JPMF) and raised money through the sale of memorial pins to officers. They asked me if, when I was feeling up to it, I would like to help them decide what to do with money. I said yes and the rest, as they say, is history.

Twenty years later, the JPMF (a registered charity) is still going strong. We raise public awareness about why and how people can make their workplaces and the roads safer for everyone, including first responders. Over the past two decades, the JPMF has produced eight 30-second public service announcements that have aired on TV and on-line over two million times. The 10-minute safety video, Put Yourself in Our Boots, has been viewed online and in safety presentations (at schools, businesses and conferences) thousands of times.

I can’t believe nearly 20 years have passed since John’s death. The time has flown by. It’s funny but I never find myself wondering about the person John would be today or what he would be doing had he lived. Instead, I ask myself what the 32-year old John would say, if he could pop back for a visit and see the person I have become and what the JPMF has accomplished in his memory. I think it’s safe to say that John would be beyond proud of us… and happy that I’m happy again.

Then he’d lie down on the couch, turn on the TV and watch a rerun of his favourite show.

Maryanne Pope is the author of A Widow’s Awakening. She is CEO of Pink Gazelle Productions and chair of the John Petropoulos Memorial Fund. She lives on Vancouver Island. Memorial pins are still available for purchase at jpmf.ca.