Features
Policing at the speed of social media

How the Calgary Police Service, the host of this year’s CACP (Canadian Association of Chiefs of Police) conference, navigates “swatting,” amateur online sleuthing, and more. 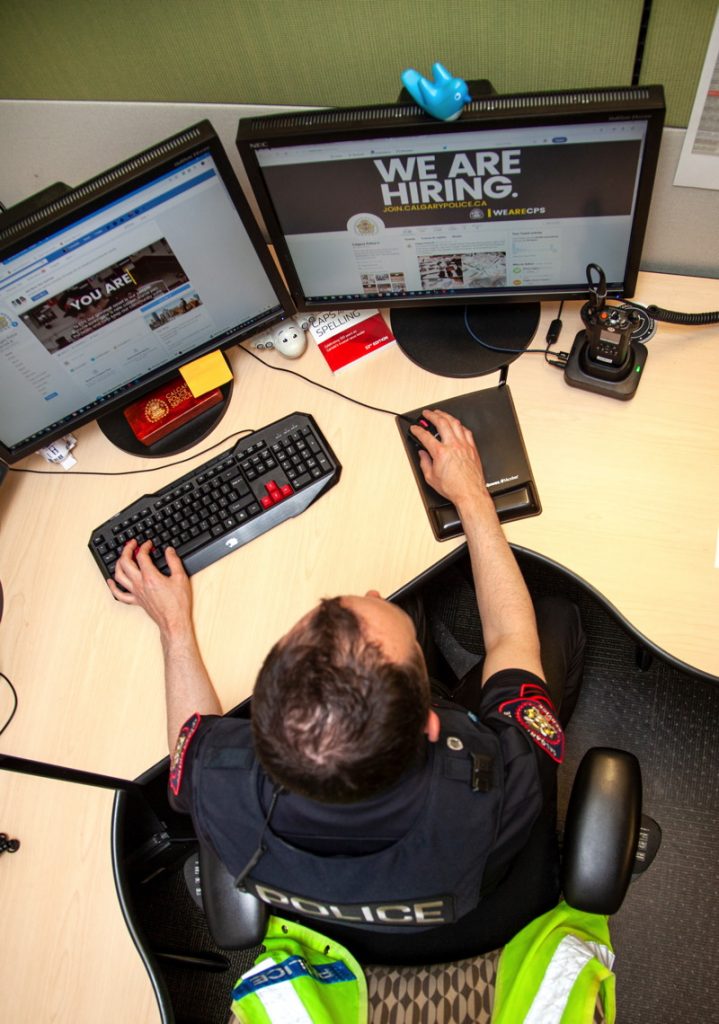 “Officer, did you do everything you could possibly do in this investigation?” If you didn’t check social media, could you really answer, “Yes?” In this day and age, I don’t think you could.

This is an indisputable statement by Det. Darrin Chaplin of the Calgary Police Service (CPS). Since the advent of social media, there has been a fundamental shift in policing. What began as something many believed was a fad, or a passing trend, has become such an integral part of day-to-day life that it’s not uncommon to hear of people making their living on some kind of social media platform. The terms “influencer” and “Insta-famous” are becoming normalized labels.

Social media has permeated every aspect of daily life, with no exception given to policing. Police organizations across the globe encounter social media-related or enabled files every day. This is not a new trend and it’s not something that is going to go away.

One of the first representations in Canada of the magnitude of influence social media can have on police involvement and investigation was the 2011 riots in Vancouver after the Vancouver Canucks lost in the Stanley Cup playoffs.

The riots were characterized by violence, looting and the destruction of property. According to Christopher J. Schneider in Policing and Social Media, “The online reaction to the riot was immediate and multifaceted. Social media users launched a public condemnation of the riot almost immediately after it erupted and while the riot was in progress.”

Due to the swift public outcry, police were able to heavily rely on the images and videos from social media, which captured the rioters, and ultimately pursue investigations and arrests.

One such instance occurred in Calgary in 2017. Police received a phone call about a violent incident inside an apartment building and officers were in the process of evacuating and containing the scene. In the meantime, the victim who lived in the apartment building had been livestreaming her gaming session when she became embroiled in an online altercation with another player.

In response, that player reached out to a “swatter” and asked him to swat (report a false emergency about) the victim. Prior to the incident, the victim had ordered pizza and, when it took too long to arrive, she called to find out what was taking so long. The delivery person informed the victim that he was unable to get to her house because it was surrounded by police. It wasn’t until that moment that the victim realized what was happening.

The victim, who makes her living as a gamer through sponsorships and advertisement, ended her livestream once she became aware of the situation and it was later determined that it was, in fact, the swatter who had called police reporting the violent incident at the victim’s residence.

Det. Chaplin, who investigated the event, reiterates the findings from the Vancouver riots—that police tend to underestimate the power of social media.

“We underestimate the importance of a person’s social media reputation and the effect it can have on someone making a living. [Online] …people will do or not do certain things because it could affect their followers, their likes, their reputation.”

Chaplin further states police need to adapt to what he calls “new motives.” Someone’s online intent or impulse may not fall into the traditional incentive compartments police have typically seen in years past, he notes.

In modern investigations, motives often include things like protecting or upholding one’s online reputation. As seen in the above swatting incident, the swatter outwardly told the victim he was angry with the victim for “going offline,” as it negatively affected his own credibility as a swatter-for-hire.

Conversely, the victim purported her losses to be upward of $10,000 due to her being offline and she spent much of the following weeks apologizing to her followers for being offline.

CanadaCreep was another incident in which social media played a substantial role. By the summer of 2017, the CanadaCreep account had amassed more than 17,000 followers on Twitter over the course of one year. The modus operandi of the account was to post voyeuristic images and videos of women—the majority of these being taken up the skirts of unsuspecting victims.

In this case, social media was significant in assisting police in the investigation, right from the beginning. Not only was the offence being propagated over social media but, as with the Vancouver riots, there was a massive public outcry on social media, too. By the time police became aware of the account and its content, the social media community had already determined the offences were taking place in Calgary.

The primary investigator for this case, Det. Simon Ross, says the amateur sleuthing done on social media was an integral part of identifying and apprehending the offender.

“By the time police became involved, the public investigation had already been going on for two days prior to that,” he says. “People had started tagging police in social media posts, which is how it came to our attention. The CPS social media team became aware of the ongoing incident and were able to reach out to the public and encourage people to come forward with information.”

“Through the power of social media, within hours of CPS Cyber becoming aware, two tips had come in identifying the suspect,” Ross continues. “We were able to harness what naturally happened within the social media world to the ultimate benefit of the investigation.”

These incidents, and numerous others, serve to highlight some of the challenges and potential benefits facing law enforcement as we continue to navigate the evermore connected world we police. Social media continues to grow at an exponential rate, with new platforms popping up and disappearing faster than law enforcement can sometimes keep up with. As the online world continues to grow, training for law enforcement needs to be a top priority so that police can continue to serve new generations who are living in the digital age.

CPS aims to be at the forefront of new and emerging social media trends. In order to do so, members attend training opportunities locally, nationally and internationally, held by law enforcement and trusted partners. CPS also recognizes the crucial role external entities play in the development of law enforcement and, as such, actively engages with other law enforcement partners, businesses and academic communities throughout the country to gather and share knowledge.

CPS is hosting its third Cyber Summit from March 10-12, 2020. The Summit will play host to local and international speakers who will address topics such as the relationship between social media and police investigations. We look forward to hearing from investigators on such high-profile cases as the Amanda Todd investigation, among others. More information at cybersummityyc.ca.

Patricia Ariss is a constable with the Calgary Police Service, Cybercrime Team. She has been with CPS for eight years.