As I sit down to write this (late February), a flood warning for my hometown (St. Marys, Ont.) has just been lifted and the residents of Brantford, Ont., who were evacuated due to the mid-February inundation, have been allowed to return home. My personal social media feeds have been teeming with videos and photos showing the dangerously high Thames River. 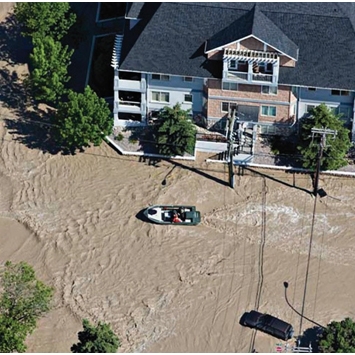 Additionally, OPP were looking for a three year-old at the time of writing this, who was swept away from his mother near Orangeville, Ont.

It brings me back to June 2013, and watching the devastating TV coverage of the Alberta floods. Up until the Fort McMurray wildfire, the Insurance Bureau of Canada found those floods to be the costliest disaster in Canadian history.

“Five lives were lost and as much as $6 billion in financial losses and property damage was sustained across southern Alberta,” the City of Calgary reported.

The city went on to state 1,000 kilometres of road was swept downtown in 24 hours, more than 1,600 people registered at community support centres on the first day of the emergency, and upwards of 100,000 calls were received at 311. We know all the first responders were working themselves ragged around the clock.

The Calgary Police Service was “front and centre on social media” during the chaos, according to a CBC article, and was later recognized with an award for social media event management.

“There is a unique piece and that is the ability for Calgary Police to see live video from the public safety network if they need to at their real-time operation centre,” von Hollen told me.

This ability also applies to Calgary Emergency Management Agency as well as the Calgary fire departments.

“So in the 2013 flood, the emergency operations centre had access to all of our public safety network cameras as well as our mobile trailer units,” von Hollen said.

I can imagine this cohesiveness had quite the impact in a quicker response and the overall management of such a constantly shifting calamity.

It is something we need to look more closely at, especially in Ontario where emergency management plans and programs have not been updated in years, as the Auditor General found in her 2017 Annual Report.

The report also revealed the province has no co-ordinated information technology (IT) system in place for emergency management and key initiatives in step one of Ontario’s new Emergency Management Action Plan (announced in December 2017) talk about governance and evaluation frameworks, among other things, but fail to mention any IT specifics.

All the government has said is it will “support municipalities in accessing critical supplies and resources in an emergency by improving the supply chain and logistics program, and enhance information and resource sharing among municipalities and the province by deploying emergency management software.”

With the advent of Next Generation 911 on the very near horizon, the lack of details here is quite the concern.