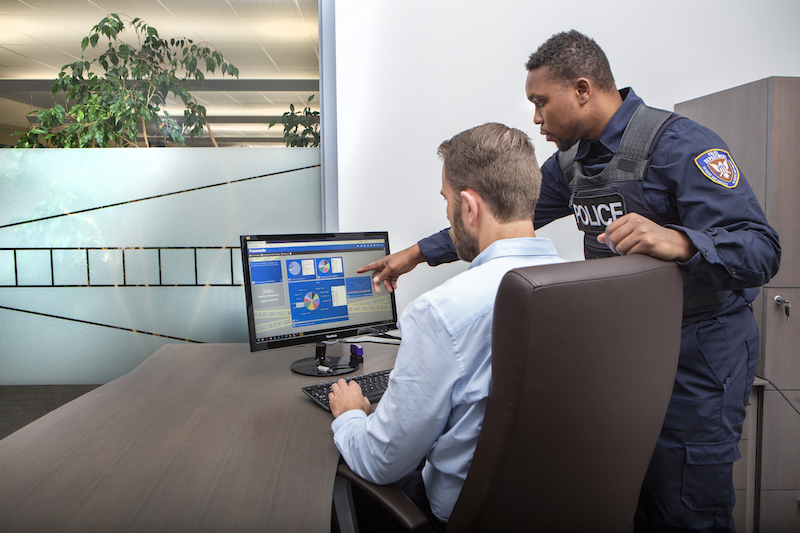 Many police services will grapple with the decision of whether to place that evidence in the cloud, on premise or in both through a hybrid storage approach. Photo: Panasonic Canada

Today’s tech-driven world is having a serious impact on the way police investigations are conducted. Police services are now obtaining digital assets through a number of new mediums, including recording devices, social media and text messages. In fact, a recent study found that 85 per cent of today’s investigations involve some form of digital evidence. The days of officers spending valuable time hand writing reports are over. However, while digital records have the ability to reduce reporting time and improve accuracy, agencies are now faced with a whole new set of challenges as they tackle the resulting influx of data.

According to the IACP, many police departments are “behind the curve” when it comes to handling digital evidence. While the organization notes a number of different factors that play into this – the rapid proliferation of digital devices, budgetary limitations, and a lack of proper training opportunities – there are some key pain points all police services should be aware of. With a keen understanding of the following challenges, police services in Canada can better align themselves for the continued explosion of digital evidence.

1. Data Volume on the Rise:

To say that police services are dealing with information overload would be an understatement. The amount of evidence available to police has grown exponentially with the influx of smartphones, social media, the web and video. We can zero in on the video surveillance market as a key marker of the growth we’ve already experienced and an indicator what we’ll continue to see. According to a recent IHS Technologies report, approximately 566 petabytes of data were generated in just one day from new video surveillance cameras installed worldwide in 2015. By 2019, that data will grow to over 2,500 petabytes daily. What does that mean for today’s police services? Simply put, it means this isn’t just a passing trend. It’s imperative that they put a system in place to manage this data.

If asked ten, five or maybe even just a few years ago about evidence storage, the majority of police would likely respond with physical evidence in mind, noting the importance of air tight containers and warehouse space. In today’s modern police environment, capturing, collecting and managing evidence digitally has become a necessity. But where does that evidence live if not marked in a box based on the case file? The data management process can be time intensive, complex and cost-prohibitive for police services, particularly when the collected evidence is coming from several outlets. The nature of this job requires flexibility, meaning police need to be able to both store and access all digital evidence seamlessly. Many police services will grapple with the decision of whether to place that evidence in the cloud, on premise or in both through a hybrid storage approach. While the cloud is often assumed to be the best choice, it’s actually the latter that has emerged as the optimal set up. It offers a cost-effective, scalable infrastructure that accommodates the growth of digital evidence being collected. At the same time, it allows the police to take advantage of available storage within their existing infrastructure.

While having the ability to easily share digital evidence is critical, it will all be a futile effort if the data is compromised. Over the course of an investigation and court case, files may be shared with litigators, media, or other parties. Just as any officer would ensure the integrity and security of physical evidence, it’s paramount that there’s a chain of custody for digital evidence too. Police services must employ a digital evidence management system that has the proper security technology and protocols built into it. Two of the first questions to ask when inquiring about a platform is: does this offer secure sharing? And is there a full audit trail capability?

This last challenge can also be viewed as a big opportunity for today’s police services. According to Pew Research Center, millennials (ranging between 23 and 37) are now the largest generation in the workforce after surpassing Gen X in 2016. A generational shift in younger officers filling the majority of frontline ranks has brought about a new digital literacy and expectation among the operational day-to-day police duties. As perpetrators become more digitally literate, young officers are also looking for new ways to capture notes, communicate using digital applications and access any file at their fingertips. Police teams must consider the expectations of these generations as they dominate the workforce and influence purchasing decisions for their organizations.

Police services today are facing many challenges when it comes to managing digital evidence due to the time intensive processes involved with searching for, sorting, tagging and disclosing digital files. Knowing that these challenges exist is half the battle – the other half is putting a proper plan in place to address them. The implementation of a proper solution is vital to efficiently manage data and streamline investigation processes.

The emergence of digital evidence management systems has the potential to relieve police services of the administrative strains they face in their day-to-day. Forward thinking police agencies should look for the ability to collect and search evidence across all of their silos as well as have a single system to manage their digital evidence.

Susan Black is the General Manager, IT and Security Systems, at Panasonic Canada.