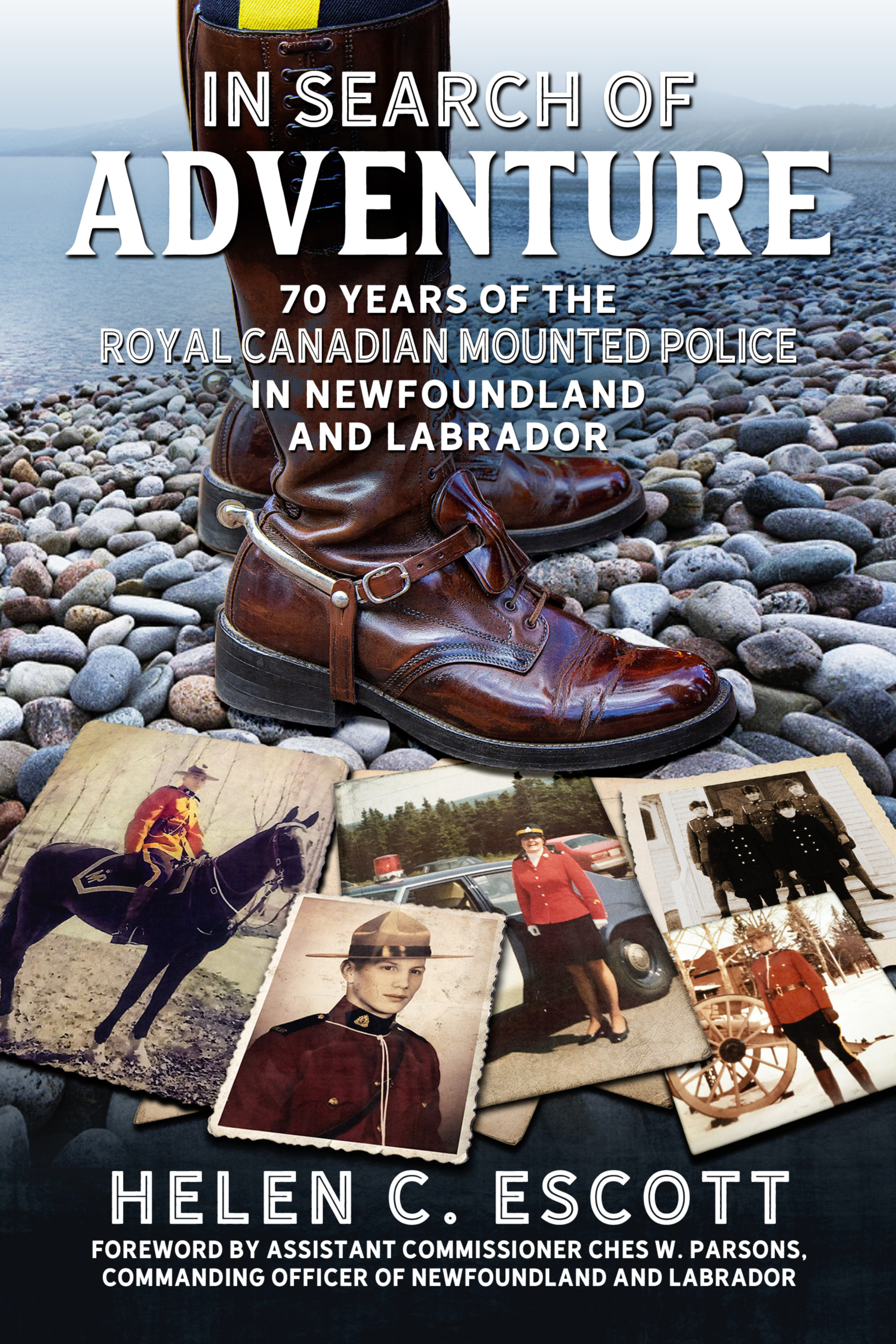 UFOs seem to have taken a liking to RCMP members over the years and have tried to contact them, or maybe even abduct them several times. In spring of 1970, two young RCMP officers, constables Bob MacKinnon and Greg Savicky had an encounter of the UFO kind while on patrol just outside of St. John’s.

That is just one of the stories you will read about in: In Search of Adventure – 70 Years of the RCMP in Newfoundland and Labrador by author Helen C. Escott.

On August 1, 2020, the RCMP celebrates its 70th anniversary in Newfoundland and Labrador. This collection of stories takes you behind the police lines that held firm for those seven decades and “gives you a front row seat to history.”

Escott interviewed seventy veterans who spoke frankly — some for the first time — about their career.

“I wanted to tell the story behind the story,” she says. “I wanted them to tell ‘their’ story.”

Escott is not only a bestselling, award-winning author; she is a proud retired civilian member of the RCMP.

“It truly was an honour to be part of this wonderful organization. I named the book, In Search of Adventure, because every veteran I spoke to started off by saying – ‘I was a young person in search of adventure.’ That’s why you join the RCMP – because you are in search of your own adventure.”

She features the story of the four Newfoundlanders who have their names on the RCMP Honour Roll. These are police officers who have lost their lives in the line of duty.

Two RCMP officers talk for the first time about being at the Badger Riot in 1959 and being just feet away from Royal Newfoundland Constabulary Const. William Moss when he was hit. Const. Moss died two days later; his murder has never been solved.

“It tells the stories of who we are; how our past explains the present and how this present will shape our future. They touch the heart as only the heart is touched by the cherished memories of those, here and gone, who serve with us now only in our memories.”

“Indeed, it is high time that a work like this was put on offer to the public,” says Assistant Commissioner Ches W. Parsons, Commanding Officer of “B” Division, Newfoundland and Labrador. “It tells the stories of who we are; how our past explains the present and how this present will shape our future. They touch the heart as only the heart is touched by the cherished memories of those, here and gone, who serve with us now only in our memories.”

It took two years to research and document these stories and Escott searched out all those who came first, including: the last living Newfoundland Rangers, the first recruit, the first three Newfoundland women to join the RCMP and the first female police officer to serve in this province.

She not only uncovered the stories of UFO encounters but stories of ghost cars on the Northern Peninsula and spoke to the only Mountie to be kidnapped and taken to a foreign land.

“If ours is a rich history,” states Sergeant Major D.S. (Doug) Pack, “Come read of the men and women who made the investment. Helen C. Escott has captured their stories to allow the honesty and humility with just the right dash of quiet pride to come through. It is a remarkable account of a remarkable group.”

While serving in Newfoundland and Labrador, Escott blazed trails. In 1998, she created the RCMP’s Media Relations – Communications Unit in “B” Division where she became the first senior communications strategist and media relations spokesperson.

“I thoroughly enjoyed reading In Search of Adventure,” says Leo O’Brien, retired RCMP superintendent and president of RCMP NL Veterans Association. “Helen C. Escott did an outstanding job of providing a description of the RCMP policing in Newfoundland and Labrador from 1950 to present. The interviews she completed with all the members and employees clearly depict the dangers and challenges faced by the RCMP in their first seventy years of policing. If you have an interest in policing or in the history of Newfoundland and Labrador this is a must read. It is an interesting and enjoyable collection of stories, yet very enlightening at the same time.”

In Search of Adventure and Escott’s other novels are available at: Costco, Chapters, and Coles. They are also online at indigo.ca, Apple – iTunes, Nook – (Barnes & Noble), Amazon, and Kobo.

National and international orders can be placed by calling 1-866-739-4420 ext. #22 or you can send e-mail eoldford@flankerpress.com.

Listen to our episode of Blue Line, The Podcast with Escott here.