How do you watch someone else live your worst nightmare? How do you manage that emotionally? 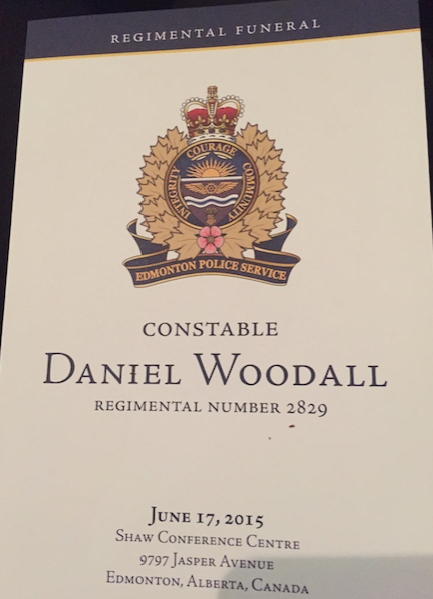 2015 was a difficult year for law enforcement in Alberta. In January, Const. David Wynn of the RCMP was killed in the line of duty in St. Albert, just north of Edmonton. I had been a police wife for eight years and this was the first time I really faced the dangers of my husband’s work. That was my first regimental funeral. On that unseasonably warm January day, I would have never imagined I would be attending my second only six months later.

On June 8, 2015, Edmonton Police Service Const. Dan Woodall was killed in the line of duty. My husband had just got home from his shift. We were sitting on the couch, watching Game of Thrones, when a message came in to my phone, asking if he was OK.

“Yes, he’s sitting right here. Why?” I replied. Within a few minutes the messages were coming in droves to our phones and social media. Then my husband received the official notification from the service. Social media and instant messaging have created an instantaneous communication chain, which we were not prepared for.

The next day I stood at the door and said goodbye to my husband as he left for his shift, like I had hundreds of times. I thought about Woodall’s wife, Claire, and their two young boys never experiencing this ritual again. The emotions and fear were consuming me and I was left at the door, alone, in shock and unsure about how to deal with this.

Thankfully our police service supports a spouses association. This group, led by Tammie Hermosura, was an absolute lifesaver that week. Tammie dealt with the media requests, organized volunteers and worked with the EPS to arrange a meeting for the spouses. A lot of tears were shed in that small, packed meeting room. I felt a sense of finally being in the presence of other people who felt the way I did.

The weeks following Woodall’s death were very isolating. Friends and family reached out to ask how my husband was doing, but no one asked me how I was doing. The police stations had a stream of visitors bringing food and thanking them for their service. The support from the public was nothing short of amazing and appreciated. I felt invisible and guilty for thinking about myself — my husband came home at the end of his shift after all — but I was also watching someone else live my worst nightmare.

Before June 8, 2015, the EPS hadn’t had a line of duty death since Const. Ezio Faraone on June 25, 1990. Whenever I was worried or stressed about the dangers of my husband’s job, I would remind myself all of the officers had come home from their shifts for 25 years. Woodall’s death ripped that statistical foundation I had used to minimize my stress right out from under me. Although my husband and I talked about the shooting, I was cautious about how I did so because I did not want to add to his stress.

I would have never predicted how a line of duty death would impact me — it was something we had never talked about before. A police officer often relies on his or her family for support and it’s a role I wholeheartedly accept. That being said, more can be done to improve the support for those who support the front line.

This experience put a spotlight on the unique needs of the first responder spouse and I would like to start a conversation on what can be done to allow us to put our oxygen masks on first.

Kerry Avery is the owner of Odin Training Solutions Inc., specializing in the design and development of law enforcement training. She has presented at international law enforcement conferences, including ILEETA, IADLEST and IACP. Kerry is also the editor for the ILEETA Journal. She can be reached at Kerry.avery@shaw.ca.
Print this page