Pedalling 365 days a year, no matter the weather, these versatile RCMP members are targeting chronic offenders while also engaging with their community at large on Vancouver Island 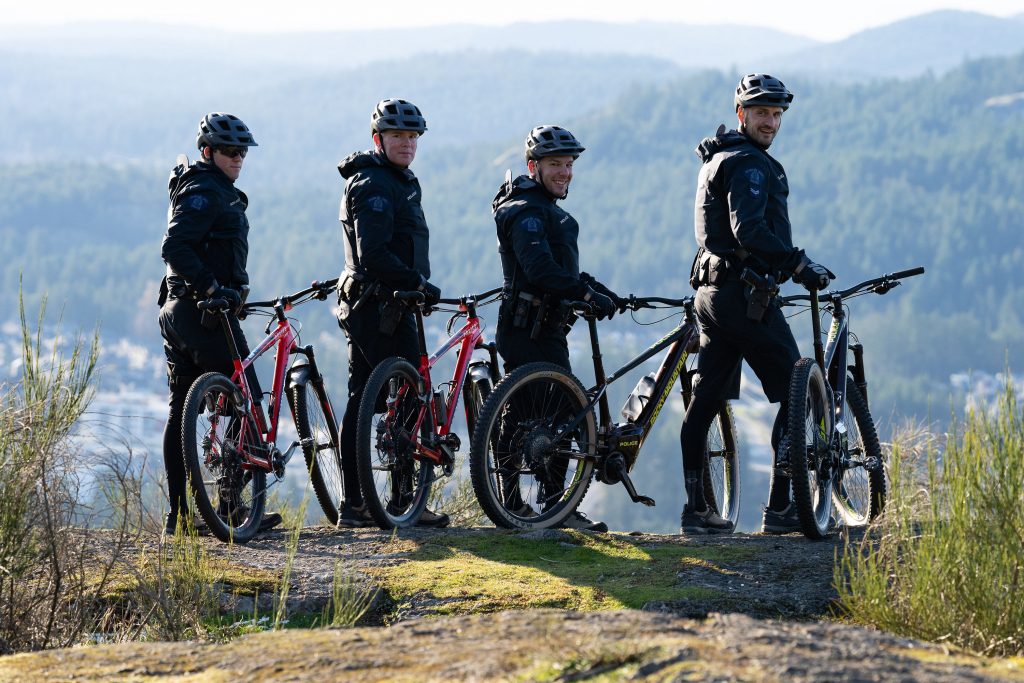 As one of the fastest growing communities in the country, the western suburbs of Victoria, B.C. — which is policed by the West Shore RCMP — has developed a specialized, proactive unit to adapt to the needs of this burgeoning population. Moreover, the topographical characteristics of the area — there are many fjords, bays, lakes and rivers — called for a unit that could access both rural, urban and trailed areas. As such, the West Shore RCMP Bike Unit was created on July 1, 2018, and it did just that.

“We have known each other for a few years and come from different policing backgrounds which makes a perfect blend for a proactive and successful unit. This in turn ultimately benefits the community,” says Vunic, supervisor of the bike unit.

Without going into sensitive operational details, the shifts will typically consist of consulting with the detachment’s crime analyst to explore current crime trends and to see if there are specific areas officers need to pay particular attention to.

“We patrol the whole West Shore and all the trails,” Vunic says. “We touch base with businesses and proactively target chronic offenders. It is not uncommon for us to stop and talk to people as this is what we do; we engage the community, and we make ourselves known to the public and the criminals. We want to make the criminals feel unwelcome here.”

The members of the bike unit all come from different part of the country. Vunic hails from Victoria, B.C., and Bérubé grew up in Montreal, Que. Vose is from Langley, B.C. and Mackay is from Ottawa, Ont. They note the strong bond between them but say they also enjoy pranking each other – “a bit like brothers,” according to Bérubé. It is that sense of family that ultimately makes them a strong unit.

“We know that we can trust each other with our lives,” Bérubé adds.

All the bike unit officers are devoted to fitness and healthy lifestyles. They all obviously enjoy cycling. Vunic is constantly participating in bike races locally, provincial and nationally. In fact, he received the gold medal in the World Police/Fire Games, first place in the Red Bull Divide & Conquer, and first place in the Bear Mountain Canada Cup. He also placed 15th in the 2019 UCI World Championships for Olympic Distance Cross Country (XCO) and is the 2019 B.C. Provincial Champion XCO.

Meanwhile, Vose was part of the 2018 Cops for Cancer Tour de Rock. Bérubé is an avid Brazilian jiu-jitsu (BJJ) athlete and Mackay loves working out with CrossFit.

The officers say they consider themselves to be an aggressive unit. They are relentlessly targeting chronic offenders, especially property crime offenders that are responsible for a rash of crimes such as theft from and of vehicles, break-and-enters, etc.

“We don’t leave them alone. We will go wherever they are, on the street, in alleys, in parks, etc. (hence the versatility of a bike). We want to make sure that they know we are always on them and ultimately provide the community with a sense of security,” Bérubé says.

What makes the West Shore RCMP Bike Unit stand out?

The advantage of the unit is the ability to bond with people from all walks of life, according to the members. They go out into the community, whether it’s in the city core or around the suburbs, and they talk to everyone — from elderly members of the general public to children to known offenders. They let them know that they are there. This also helps them gather criminal intelligence, they explain.

“We like to be involved with the community and interact with trail users. We also interact with people from all different paths of life. That’s just the nature of our work — from the wealthiest to the poorest, we will treat everyone equally with respect and dignity,” Bérubé says.

The bike unit members have specific training and are a great asset for covert/overt surveillance, the RCMP says, which led to the recent execution of search warrants where various items of stolen property and large amounts of drugs were seized. But the bike unit is even more than that; it is utilized to access trails and remote areas to assist with missing/lost persons reports.

“We are out there, day and night, no matter what the weather is — rain or snow,” Vose says.

The members’ Rocky Mountain Vertex mountain bikes allow them to do that.

“They are great quality bikes that can sustain a fair amount of abuse — because they literally go everywhere! — no matter what the terrain is: road, dirt, stairs, curb hopping, etc.,” according to Bérubé.

The geometry of the bike is perfect for the kind of work they do; the Vertex model and its lightweight frame provides “incredible stiffness and rolling speed, while its modern, aggressive shape inspires confidence in our abilities to ride everywhere,” Bérubé continues. Besides, the other officers chime in, they are happy to support a Canadian company.

In addition, they have acquired two Rocky Mountain Growler Powerplay electric bikes or eBikes. The technology of the eBikes, which includes a Dyname 3.0 drive system and high-volume 27.5+ tires, allows them to cover greater distances and climb higher altitudes while conserving energy — something that is crucial as police work does not stop after the ride, Bérubé notes.

To have a proactive bike unit that runs all year round, the West Shore RCMP Detachment consulted and sought feedback from experienced mountain bike riders in order to source high-quality gear that would allow bike unit officers to perform their duties as efficiently as possible.

Moreover, the clothing has been specifically adapted to perform police duties. From socks, shoes, shorts, jackets, gloves (winter and summer), and glasses, the officers on the bike unit at West Shore RCMP detachment are well equipped to brave the elements, any time of the day, any day of the year. For attire, they opted for another Canadian company based out of Squamish, B.C., called 7mesh.

“A lot of our clothing is Gore-Tex, which proves to be very efficient in keeping us dry during the wet weather,” Bérubé says. The unit also uses gloves from the 100% brand, headquartered in San Diego, Calif., and well-known in the Motocross world and on BMX tracks. Smith Optics, established in 1965 in Sun Valley, Idaho, supplies their slick helmets and performance glasses.

With the combination of the high-performance equipment and a high level of motivation from the officers, the West Shore RCMP Bike Unit has proved to be an extremely efficient asset to the detachment and a leader in Canada’s police bike units, according to the detachment. Since the creation of the unit, the members’ versatility and proactivity has led to more than 80 arrests of wanted individuals and the recommendation of more than 120 criminal charges to Crown Counsel.

“As a bike unit, we enjoy connecting with the local businesses. We let them know of our presence — as it is not very typical to have bike patrols in some communities. Therefore, we make that human contact and listen to any concerns they may have,” Mackay says. “We try to come up with solutions with them if they have been victimized in the past, such as with a B&E or mischief, etc., or how they can help protect their businesses.”

What really makes the unit a great success is no secret: these police cyclists have a lot of fun working together and they’re passionate about serving.

“On occasion, we do step up and join friendly games of floor hockey with local students,” Vunic notes. “We all have children, we all have huge family values, which is reflected into how we like to get involved in the community.”

Whether it’s dense woodland trails, thick with snow, or steep muddy hills climbing into the clouds, the challenge of the trails are no match for these high-energy officers on two wheels; they’re unstoppable in the saddle — a WTB (Wilderness Trail Bikes) saddle that is.

Related
Former B.C. Mountie who killed herself was agent for change within force
Flight plan: the role of drones in security
The border: a guide for the newcomer
Building the first RCMP sweat lodge