When crime lab chemists handle evidence that contains illegal drugs, trace amounts of those drugs are inevitably released into the laboratory environment. When chemists scoop a bit of powder to test it, for instance, microscopic particles can become airborne and later settle on nearby surfaces. Particles can also be spread by touch. To some degree, this is an unavoidable byproduct of the testing process, and it can result in detectable background levels of drugs in the lab. 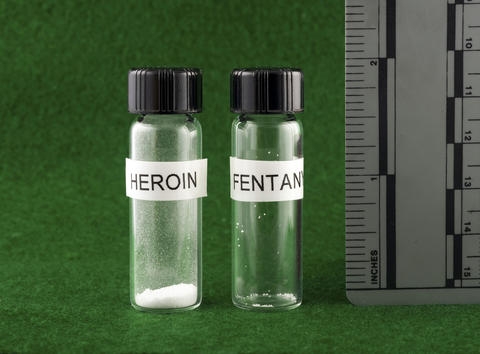 A lethal dose of heroin compared to a lethal dose of fentanyl. This is just an illustration—the substance actually shown in this photo is an artificial sweetener.

Now, scientists at the National Institute of Standards and Technology (NIST) and the Maryland State Police Forensic Sciences Division have developed a protocol for measuring those levels and used their new protocol at three forensic chemistry labs. Their findings were published today in Forensic Chemistry.

Best practices recommend regular cleaning of surfaces to remove drug residues, but few labs currently monitor background levels. That might have to change as super-potent drugs like fentanyl, the synthetic opioid driving the nationwide overdose epidemic, become more common. Small amounts of fentanyl are often mixed into other drugs to boost their potency, and labs may have to increase the sensitivity of their instruments to detect those small amounts. If background levels are too high, that can potentially affect the test results reported by the lab.

“If I run a sample and it has fentanyl, I want to be sure that fentanyl came from the sample and not from background levels in my lab,” said NIST research chemist Ed Sisco, the lead author of the study.

To measure those levels, the authors swabbed laboratory surfaces in the same way that airport security agents might swab a passenger’s hands or luggage. At the airport, that swab would go into an instrument that tests for traces of explosive residue. In this study, the authors tested the swabs for traces of narcotics. They swabbed laboratory benches, balances, telephones and door handles. They also swabbed outside the lab space, in evidence-receiving areas and office spaces. To ensure that the measurements reflected routine conditions at the lab, no unscheduled cleaning took place prior to testing.

To identify which drugs were present, the researchers used a technique called Direct Analysis in Real Time Mass Spectrometry (DART-MS). They then used Liquid Chromatography Tandem Mass Spectrometry (LC/MS/MS) to measure how much of each drug was present. These instruments are more sensitive than the ones crime labs use for everyday drug casework.

“If you push your sensitivity enough, you’ll find narcotics on almost everything,” and not just in chemistry labs, according to NIST research chemist and co-author Marcela Najarro. The authors cited a 2011 study that found detectable amounts of cocaine on 75 percent of shopping carts, ATM machines and other frequently touched surfaces in public places.

At the labs they tested, the researchers detected at least 13 different substances, including fentanyl, heroin, cocaine, oxycodone and methamphetamine. For fentanyl, the average level detected was two nanograms, or billionths of a gram, per square centimeter, and the highest level was 55 nanograms per square centimeter. “That level of background wouldn’t affect measurements at most labs because most labs don’t look down that far when testing evidence,” said co-author Amber Burns, a forensic chemist with the Maryland State Police. “But knowing those numbers can be important if a lab is considering an increase in their sensitivity.”

Some other interesting findings: The balances that chemists use to weigh evidence contained up to 10 times more drug residue than other surfaces. This suggests one relatively easy way that labs can reduce background levels. Also, different labs had different contamination profiles. One of the labs had higher levels of cocaine while another had more opioids, which reflected the mix of cases handled at each lab.

The authors detailed their protocol so that other labs could reproduce it, with recommendations on how to swab and where, and how to analyze and report the results. In a follow-up study, they will investigate lower-cost methods so labs can more easily afford to conduct regularly scheduled tests. They also plan to partner with experts from the National Institute for Occupational Safety and Health, who will assess the potential effects of background levels on workplace safety.

In the meantime, they hope their research will provide a reliable protocol that any lab can follow. “You can’t completely eliminate background levels of drugs,” Sisco said. “But you can measure it to make sure it’s low enough, and that it stays low.”

A lethal dose of heroin compared to a lethal dose of fentanyl. This is just an illustration—the substance actually shown in this photo is an artificial sweetener.

Rich Press is a science writer and public affairs specialist with NIST.
Print this page