Features
Minneapolis – What happened and how can we do better?

"Deficiencies in training your personnel in this very high-risk area of policing [control tactics] result in operational deficiencies in the street..." 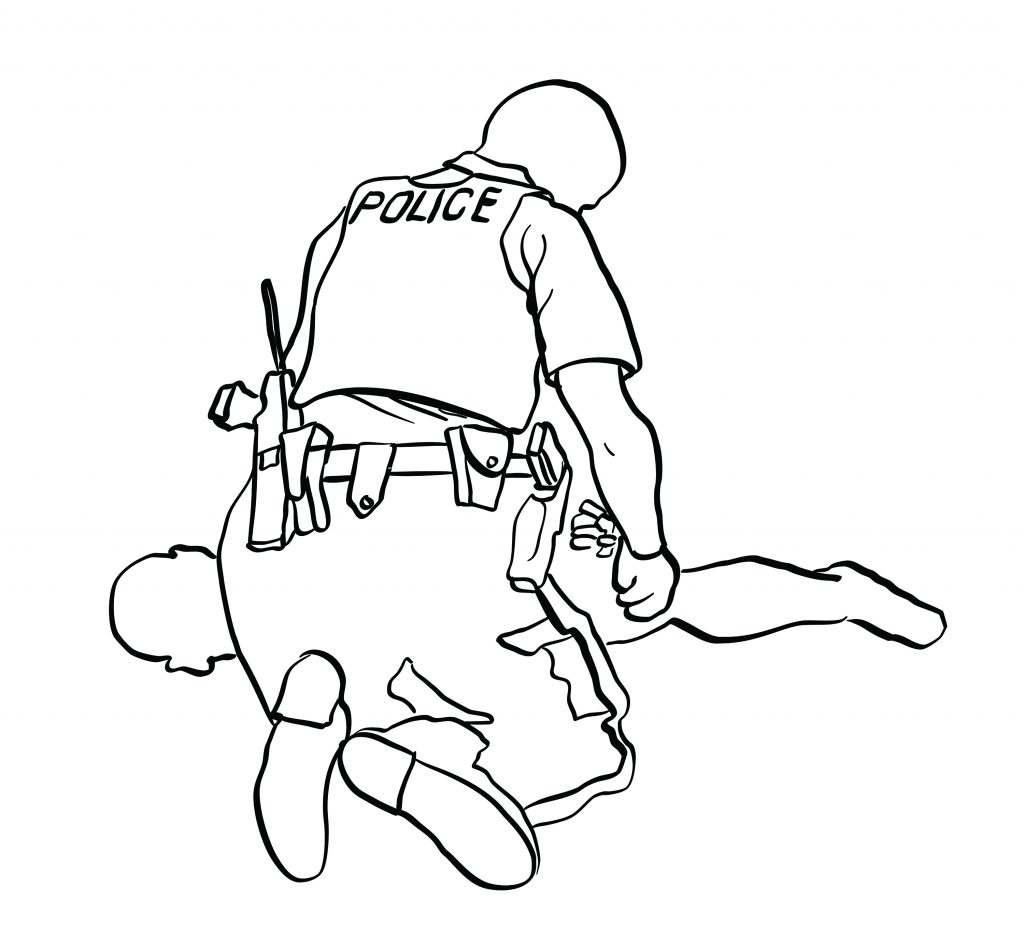 My initial reaction to a brief first look at the Minneapolis video of the George Floyd arrest was this: I have been disturbed by what many other videos have claimed to reveal over the years. I did not believe it appropriate to comment on a video that was largely obstructed and partial at best, without knowing the fuller context (what the person did, how hard the person resisted or how violent he became, how much he was resisting on the ground, etc.); without knowing the Minneapolis Police Department’s training or use of force policy, etc.; without knowing the duration and/or intensity of the struggle; etc.

I also know that people tend to say or yell things when they are being restrained that may or may not be true. I believe in a full evaluation of all available facts before foisting a street-filmed video accompanied with biased commentary and unschooled media opinion on what was occurring, and offering partially-informed “expert” opinion on an incident – and in doing so, inflaming a fragile public peace and rushing to judgement on an officer’s tactics who was actually in the arena. I stand by this approach generally.

My evaluation since has led me to believe that Floyd was not behaving like a dangerous criminal – he may have committed a minor fraud offence – he may not have. He appeared (from additional video sources) not so much to resist arrest, but to descend into a mental health/drug-induced/medical crisis. I did not see a violent, protracted struggle for control. What I did see was an obstructed video of a lone officer kneeling across a man’s neck.

This is 100 per cent contrary to training that I have provided to thousands of police officers over the past 30 years. It is specifically cautioned and practiced against for safety (and control) reasons. It can cause cervical spinal damage and, in some cases, compromise the airway. This officer had his sunglasses perched on the top of his head. It occurred to me that if there had been a violent struggle, his sunglasses would not likely have remained there. The subject began saying that he couldn’t breathe and referred specifically to the “knee in his neck” (as did the crowd). This should be an immediate and obvious (and repeated) cue to re-evaluate one’s tactics, positioning and the resources that might be required for a changing situation.

Officers are trained to look for developing medical emergencies in control and arrest situations. Floyd was handcuffed – now, that does not mean he was fully under control – but it is a significant step in the control process. In a medical crisis, officers are trained to remove the weight from the person’s back (this would include the neck!) and place them into a side-lying position (also called a “recovery position”). Priority emergency medical aid must be summoned. Dialogue should be attempted with the person and support from other officers on scene enlisted. First aid, to the extent that officers have been trained, should be attempted.

In this case, medical aid had been summoned and was quickly upgraded from routine to priority in relation to bleeding from Floyd’s mouth. But the weight remained on Floyd as he was held in the prone position with two officers holding Floyd’s hips and legs, and one officer still kneeling directly across his neck.

Apparently one junior officer positioned at Floyd’s lower body asked the officer kneeling on Floyd’s neck twice if they should move him into the recovery position. Apparently the officer said no, and he did not alter his position – even as Floyd lapsed into unconsciousness. As the crowd became more vociferous, the officer on Floyd’s neck flashed an expression of anger and/or concern, and appeared to draw an aerosol spray from his duty belt and to point it at the crowd. The crowd appeared and sounded genuinely concerned for Floyd’s safety. They did not appear or sound to be an angry anti-police mob that officers sometimes have to deal with.

What is so tragic about this, is that Floyd’s death in this manner was entirely avoidable. The subsequent grief of family and friends was avoidable; the burning of America was avoidable; the tearing open of wounds globally that were being diligently worked on by policy makers, police and community members over the past years was avoidable.

The role that the media and a number of opportunistic politicians (in the U.S. and elsewhere) have played has been utterly shameful and has only served to inflame and weaponize an already-divided public that has needed calming. The media has proven once again to be an extraordinary accelerant to a fire that needed to be brought under control. It appears that this has been done for little more than a ratings and profile boost, and perhaps to politically meddle. It’s disgraceful.

What can we do?

We must continue to train police officers that have been hired to serve the community. Sometimes that means controlling and arresting lawbreakers. Much of the time it does not. We must use every opportunity to engage with the public in positive, meaningful ways. I believe in Canada we have been doing a remarkable job of this. There are multiple community-based programs in police agencies that have been implemented to help solve complex racial-socio-economic-criminal-mental health-addiction challenges that exist in every community across Canada – and that governments have been unable to solve or unwilling to direct sufficient resources towards.

Regardless of circumstances, officers must be able to keep themselves safe while dealing with resistance and violence, but they must never forget that they owe the person whom they are tasked with controlling a duty of care.

When it comes to controlling and arresting lawbreakers – some of whom will resist, some of whom will react with exceptional violence – we must remember that these may not be “bad people” – they may simply be people behaving badly for a variety of reasons that may not allow them to behave or react rationally. We must not take any of this personally. It is your job.

Regardless of circumstances, officers must be able to keep themselves safe while dealing with resistance and violence, but they must never forget that they owe the person whom they are tasked with controlling a duty of care. Sometimes people will get hurt when they resist lawful arrest. In some circumstances people will die when they present a deadly threat to police or other community members. The fact does not change that we owe everyone whom we interact with a duty of care.

Politicians, the public who elect their politicians and police “leaders” bear significant responsibility in this process. If you choose to allow police officers to be trained in all of the skills and procedures that will be required of them (frequently under very stressful, dynamic circumstances) in six months, you will get what you pay for. Police officers in Canada get fewer hours in control and arrest skills training than the average high school football player gets in practising a game. Control tactics training annually in policing is marginal at best – it takes time and it costs money. The result can be police officers who lack the requisite skill sets to safely and effectively control and arrest resistive and/or violent lawbreakers. This can manifest with low confidence, in high-stress circumstances with the application of deficient techniques, and a frequent deferral to gadgets (pepper spray, batons, Tasers) to fill in the gap that an absence of training has left.

It is also critically important that the right personnel be selected to deliver force options training in a police organization. Selecting the biggest, toughest martial artist on the job to deliver training is usually not the right move. A background in combatives, sport and/or martial arts can be beneficial – but it is a very small part of a more important conduit. Your trainers must be representative of your agency. Your trainers must be qualified, proven, excellent coaches. Police training should never consist of a revolving door of martial artists who invoke their system on the agency as a whole. Krav Maga, BJJ, Judo, Karate, Tae Kwon Do, etc. should never form the foundation of any law enforcement control tactics program.

Law enforcement control tactics are very specialized. An effective training program must draw from a variety of disciplines, systems and sources to meet the needs of the agency and the community they serve. Rarely can that be achieved by plugging in a martial art or a singular, proprietary use of force training “system.”

Training must also be adaptable to changing needs and emerging trends, which means your trainers must be engaged and must be committed to this critical aspect of policing for many years. It also means that agencies must carefully track force-related encounters with a comprehensive, mandatory reporting system. One cannot simply become a control tactics instructor, trainer or coach by taking a course or holding a martial art credential – this type of training demands a lifetime commitment and very careful succession planning. Deficiencies in training your personnel in this very high-risk area of policing result in operational deficiencies in the street. These deficiencies can result in high-profile negative outcomes, unnecessary injury or death to the citizenry, unnecessary injury or death to officers, a degradation of the reputation of the agency and the profession as a whole, massive financial losses, and ultimately the loss of consent from the public to be policed.

We find ourselves dangerously close to that reality currently.

Joel A. Johnston is a retired 28-year veteran of the Vancouver Police Department with a background in Patrol, Foot Patrol, Crowd Control and Traffic Enforcement. He spent 20 years specializing in force-related training and program development, and Emergency Response (ERT).  He served nine years as the use of force co-ordinator, five years as a full-time operational ERT squad leader and two years as training co-ordinator.

He was seconded to the British Columbia Ministry of Public Safety & Solicitor General as Provincial Use of Force and Municipal Emergency Response Teams (SWAT) Co-ordinator from 2005-2011. Johnston holds a third-degree black belt in traditional Japanese karate (Shotokan).

He is the principal of Joel Johnston Consulting Inc. in Vancouver, a private training coach, consultant and use of force subject matter expert. He has been retained in 74 use of force cases and given testimony across Canada to all levels of courts, hearings, inquests and inquiries.

Related
Ready or not here comes cannabis
“Defund the police?” — How did we get here?
Trust, face time — it does matter
Building resiliency & more at Blue Line Expo 2018