I am proud to bring you our annual Blue Line Expo Show Guide in this month’s issue. On May 3, we have a jam-packed day planned for the Canadian law enforcement community, including an exclusive new workshop on building resiliency with Dr. Stephanie Conn of First Responder Psychology. 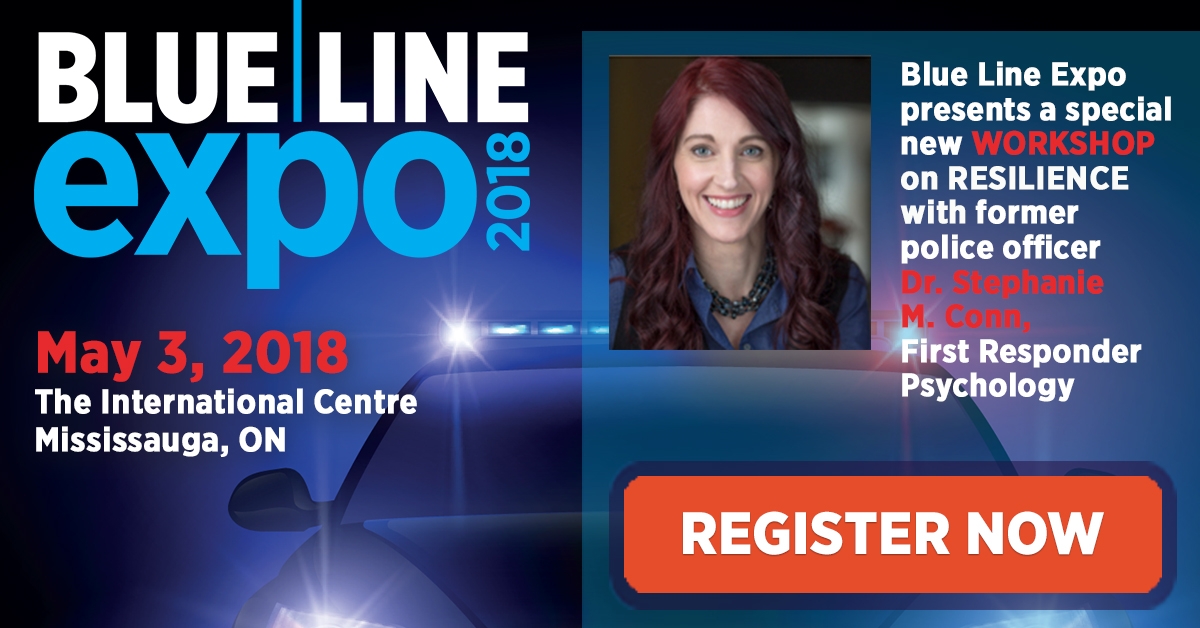 Resiliency is such a hot topic in the workplace right now. It’s all about living the healthiest life you can and, for susceptible first responders especially, proactively protecting yourself from toxic stress.

“We think about stuff all day long and that affects how we feel,” Conn says. “We might as well be intentional about it!”

Her tagline for the workshop asks: “Do you ‘should’ on yourselves about calls? Do you love feeling guilty for what you should’ve done or should be doing? It doesn’t have to be that way. Learn to reduce guilt and build resilience.”

Conn’s presentation addresses the oftentimes unconscious and maladaptive manners of thinking and feeling that undermine our resilience. These thoughts may be related to critical incidents such as inappropriate trauma-related guilt.

At Expo, her workshop attendees will learn to identify thinking and language patterns that hinder resilience, as well as how to identify more adaptive, resilience-promoting manners of thinking.

Over the past two years, the team of researchers with The International Performance Resilience and Efficiency Program (iPREP) have also been training various Canadian use-of-force trainers and first responders on methods that improve mental and physical readiness in high-stress situations.

The Peel Regional Police, the Toronto Police Emergency Task Force, the Illinois State Police and the Finnish National Police have all utilized iPREP (proresilience.org), which was designed to integrate into existing training programs (annual use-of-force recertification, for example), according to Andersen. In fact, the methodology is now being taught as standard police training at the Police University College of Finland.

Resilience in policing, as we can see, is vital in a world where shootings snag headlines on a regular basis. As Blue Line columnist Michelle Vincent wrote in a previous column, it acts as a type of armour — armour we can no longer afford to leave home without. (According to a recent University of Phoenix survey, 85 per cent of first responders face a mental health challenge.)

Expo is an exciting time of the year for Blue Line staff, readers and clients alike. Not only do we have more than 50 vendors lined up to bring you the latest in technology, products and services — emergency response drones, police pistols, Narcan Kits and so much more — but we also have a buzzing agenda.

Sit in on an engaging panel on the body worn camera debate or hear how the smart city engine is driving changes for policing… That’s only the tip of the iceberg for what’s in store.

Come find me May 3 at the International Centre in Mississauga. I look forward to seeing you.