Features
Mindset of a warrior 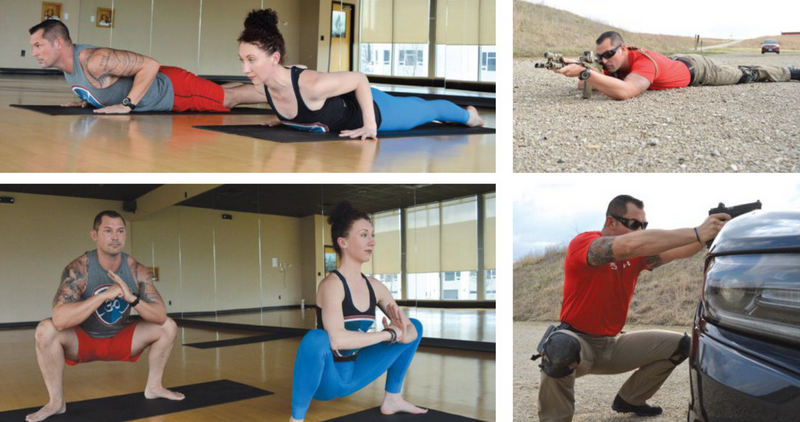 Practicing yoga in the culture of law enforcement

To effectively communicate the points in this article without semantics getting in the way, it is important to address a new hot topic being taught to the law enforcement officer who perceives him/herself as “guardian” versus “warrior.” It is the hope that the “guardian” perception will enhance community relations and perhaps lessen excessive use of force.

The dictionary defines guardian as “defender, protector, and keeper.” I prefer “warrior” because those elements of guardian are encompassed in the traditional yoga definition of warrior, along with the elements of composure, self-control, vigour, courage and clarity of purpose. A “guardian” must be an internal warrior. Many Indigenous tribes use “warrior” by the same definition and promote peace and compassion before war.

Understanding that, to be fully open to the information in this article, if you wish to replace warrior with guardian when reading, please feel free to do so.

Tactical combat breathing, body mechanics, proprioception, elimination of micro movements, front site, awareness of yourself and your surroundings: These concepts have probably been a part of your vocabulary and training dictionary as long as you have been in law enforcement.

When I attended my first defensive tactics class, I was pleased to find that the language used for basic protocols included the same cues and instruction I was giving the recruits during the yoga module.

This crossover of training language occurred again during their firearms training. However, when the pressure was on to perform basic firearms drills in front of their instructors, the challenges commonly displayed by the recruits were:

It became clear to me that the physical and mental demands for police officer training can be comprehensively addressed and met by the traditional yoga methods I have been utilizing for many years.

The traditional discipline of yoga provides proactive training for recruits in psycho-physiological resilience, in order to perform a protocol of techniques reliably and predictably, especially in high stress situations.

During my time teaching yoga to Des Moines Police Academy in Iowa — for purposes of regulating the nervous system after action in order to lessen the high statistics of burnout and mental and physical injuries — I was invited to participate in the academy to get a better understanding of the other skills being taught. That valuable understanding gave me the realization there is a crucial educational gap in training that yoga could fill: the warrior mindset.

At another academy where I taught and participated in classes, we watched videos from body and dashboard cameras of two different fights, one having been resolved the way we would hope; the other having gone terribly and tragically wrong. The difference in the outcome, the teacher noted, was that one officer had the warrior mindset, and the other did not.

The recruits left class without any additional information on the “warrior mindset,” its definition, or how to achieve it.

I did further research on training in defensive tactics and firearms, including watching training videos by Travis Haley and Pat McNamara and speaking to other experts as I traveled across the country to teach “Yoga For First Responders.” When I pointed out the elements of yoga that I was teaching to police recruits, it was the academy instructors who noticed immediately that I was speaking the same language they were using to teach accuracy, neuromuscular efficiency and timing, as well as quick and accurate judgment calls in tactical performance.

But there was also an agreement that no matter how skilled one is on a tactical and physical level, if the mental training isn’t there, the entire drill will fall apart under pressure. (Solving this problem is what many Navy SEALs attribute to the success of surviving “Hell Week.” For more on this, listen to TED Talks by Cpt. Tom Chaby and Kevin Williams.)

Sports psychologists have also recognized the power of the mind to make or break a high stakes situation, and if trained correctly, the higher the stakes, the better one often performs. This is the concept of “Flow” or being “in the zone.”

Most of us have experienced it at one time or another, whether the high stakes were physical, environmental or emotional: We were completely present, with an activated and heightened awareness giving us sharp-as-a-tack gut instinct to guide our next move. What most people don’t realize is that the ability to achieve “Flow” can be obtained through the mindfulness training techniques in traditional yoga.

Traditional yoga training embodies all the principles of the warrior mindset including patience, respect for others, and self-awareness. Specifically, it comprises the disciplines of tactical breath work for optimal functioning of the nervous system, physical drills for strong stabilizing muscles and mobility, and built-in recovery methods to withstand the stress and trauma of life. It asks you to be still, quiet and perform radical self-study and observation, even in the most difficult and uncomfortable tasks. For many who love only physical challenges, the required stillness may be the one thing you “hate to do.” But it is that very thing that leads to mental and physical triumph.

David Goggins, an ultra-marathon runner and retired Navy SEAL and United States Air Force Tactical Control Party member, says, “It’s so easy to be great nowadays, because everyone else is weak. If you have any mental toughness, if you have any fraction of self-discipline; the ability to not want to do it, but still do it; If you can get through to doing things that you hate to do: on the other side is greatness.”

In order for yoga to be successful in the culture of law enforcement, there needs to be a re-education on what traditional yoga is, as well as an understanding of the misconceptions of yoga in the west; misconceptions brought about and perpetuated by commercial marketing and branding that equates success with some unobtainable physical ideal.

To the contrary, when the “subtle bodies” — such as the nervous system and mental capacity — are out of shape, the physical body will suffer. The body does what the mind and nervous system command of it, whether it is awe-inspiring feats, or crumbling failures. In essence, the health of the commander must be the priority in order for the goal to be achieved. Such re-education must then be followed by a structured delivery system that formalizes the overlap of law enforcement training and traditional yoga training.

“Yoga For First Responders: Optimizing Combat Performance” (youtu.be/0L-6ls2Rrgc) focuses on accessing “Flow,” performing under pressure and enhancing techniques for tactical skills. The most intriguing revelation this training may offer is that if you are a tactical athlete, you may unknowingly already be practicing yoga’s elements. Yet if you want those elements to lead to more effective results on the range and in the field, you will need to recognize and understand those skills, and be able to summon them with purpose, and with solid control. You will need to develop an internal warrior mindset.

Olivia Mead is the founder and CEO of Yoga For First Responders. She is also a member of the International Law Enforcement Educators and Trainers Association. Find out more at yogaforfirstresponders.org.