Terri Miller, the president of the Alberta Association of Community Peace Officers (AACPO), is a manager/sergeant at the Clearwater County Highway Patrol in Rocky Mountain House, Alta. She tells Blue Line more about the importance of the community peace officer (CPO) program. 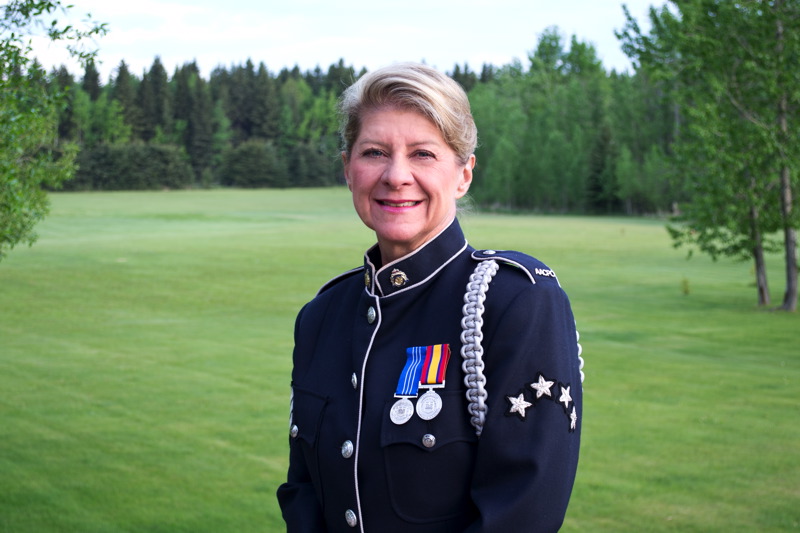 Terri Miller, the president of the Alberta Association of Community Peace Officers (AACPO), is a manager/sergeant at the Clearwater County Highway Patrol in Rocky Mountain House, Alta., with more than 20 years in emergency response and law enforcement.

Terri Miller, the president of the Alberta Association of Community Peace Officers (AACPO), is a manager/sergeant at the Clearwater County Highway Patrol in Rocky Mountain House, Alta., with more than 20 years in emergency response and law enforcement. She is also a dangerous goods inspector, licensed investigator with the Alberta Ministry of Justice and Solicitor General and has extensive training in commercial vehicle compliance. She tells Blue Line more about the importance of the community peace officer (CPO) program.

Q: How did your journey in law enforcement begin?

My journey in law enforcement started in the early 1980s. I wanted to learn about my husband’s new career as an RCMP officer so I could understand what he had to deal with, and so, I joined the RCMP auxiliary program.

I spent 10 years in the program and we started our family. My desire to get into a law enforcement career was always on my mind and in 1994, when my husband was transferred to Sundre, Alta., I saw an advertisement for a special constable position. I thought this would be a good bridge to a career in policing. The diversity and flexibility of being a peace officer allowed me to grow as a law enforcement officer and soon it became my career path of choice.

Q: We understand you have a “keen” interest in emergency management, correct?

My first exposure to emergency management was during the 1989 tornado event in Edmonton. It was surreal to be one of the first officers on scene after such a catastrophic event and to see the damage that mother nature can do. This event showed me the importance of having a plan and of having trained staff in place to implement that plan. I attended the Emergency Management College in Ontario (it closed in 2012) and completed the Emergency Managers Operation Center training course in 2009, followed by ICS (Incident Command System) 100-400.

Q: What kind of emergency management events have you been involved in?

The more notable events that I have been part of include the Edmonton Tornado, the provincial floods of 2005 and 2013, and the wildfire that caused the evacuation of the Hamlet of Nordegg. Co-ordinating and working with a variety of first responder agencies has shown me the importance of having a plan and working together on an ongoing basis to ensure preparedness.

Q: What kinds of changes have you witnessed in law enforcement at the municipal level?

Municipal enforcement has evolved over the past 15 years with one of the biggest changes in 2006 with the implementation of the Peace Officer Act. I have seen the Community Peace Officer (CPO) program grow in both scope and use by employers across the province, along with the recognition of this program by our policing agencies, some of which even employ peace officers of their own.

Tiered policing is not a new concept, but few jurisdictions have implemented it to this extent. We recognize that no officer can be an expert in or even know every piece of legislation. The Peace Officer Program has changed things significantly as it has allowed specialized enforcement units to be created with a focus on specific elements of compliance; this change has allowed a greater level of service delivery to Albertans and has freed up policing resources to deal with Criminal Code matters.

Q: How have you found your own partnerships with nearby police?

During the past 24 years as a community peace officer, I have had the opportunity to work with many different law enforcement agencies and police departments. In the earlier days police agencies were reluctant to utilize or even work with CPOs because they were unsure of our roles and authorities. Since those early years, we have strengthened these relationships and now have a grown understanding of each other’s roles. I believe policing agencies now view the Peace Officer Program as a valuable component to the law enforcement framework within the province.

Q: Judge Bruce Fraser, who oversaw the fatality inquiry into the death of Calgary-area peace officer Rod Lazenby, made recommendations last year regarding the safety of CPOs in high-risk calls, etc. Where do you stand on this?

I was pleased to see the recommendations from Judge Fraser regarding increased training, communication and mandatory access to tools and equipment for all CPOs.

Q: Why do you think CPOs should have access to more officer safety equipment/tools?

CPOs engage in a variety of enforcement situations that can be at times quite complex in nature. You add in the remote areas our CPOs are working, the communication gaps and the fact that they frequently work alone… as employers we have a duty to protect our employers and currently the province restricts tools that provincial employees of the same class have access to. Employers need to be able to provide the necessary tools based on hazard and risk assessments and a properly implemented health and safety program.

Q: What is your biggest concern with the CPO program as it stands today?

One of the biggest concerns is the recent change to radio communications between peace officers and the RCMP. This inability to communicate with the police is a safety concern for all levels of law enforcement. I would like to see the RCMP work with CPOs to ensure critical information affecting officer safety is shared in a timely manner.

Q: What do you want to see happen for peace officers in the future?

My goal is to see the role of CPOs evolve and become more integrated into the policing continuum within the province. By having trained CPOs deal with traffic enforcement, commercial vehicle safety, school resource positions, bylaws and emergency management, the police would be able to deal with the high-priority concerns within the community. We need to recognize and utilize the CPOs for their knowledge and expertise within the community.

Q: Advice for other law enforcement partners when it comes to supporting CPOs and similar programs?

My advice is to get to know your peace officers, become familiar with their skill sets and qualifications, encourage your officers to work with them and draw on their expertise to assist your department. Maintaining and building these partnerships between law enforcement agencies assists in reducing crime and provides safer communities overall.

Related
Cleaning up the peace officer role confusion in Alberta
Q&A with Colin MacLeod, retired RCMP pilot
Consult and listen: LRPS chief on First Nations policing
The border: a guide for the newcomer