Incorporated in February 2017, the Canadian Women’s Wellness Initiative (CWWI) — the women’s wing of the transcendental meditation (TM) organization in Canada — serves women whose jobs, health and lives are at risk due to chronic or acutely high levels of stress. 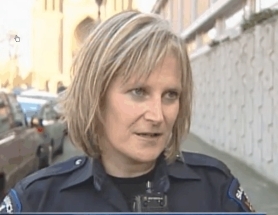 Recently CWWI partnered with the Central Saanich Police Service near Victoria, British Columbia, to offer training in transcendental meditation to their women officers and other area officers. The program, with benefits including significant reduction of stress and its symptoms, is bearing results quickly:

Each sitting of meditation is like having a restorative vacation. I have sustained, fresh energy. I feel far more settled, and little things that used to bother me, don’t as much anymore. I’m more present, and more easily able to listen to and engage with others without my mind wandering. Each sitting of meditation leaves me feeling both incredibly relaxed and energized at the same time. I wish I’d discovered TM years ago.
—Kathleen Thomson, Constable [retired], Saanich Police Department.

Women in policing is growing in Canada, but not burgeoning. As of 2016, Canadian women accounted for almost 21 per cent of all uniformed officers, but only 13 per cent of senior officers. Gender balance in policing can be a positive, with women officers often complementing male officers by offering a different perspective, negotiating from a different angle. Especially in community policing, often victims feel more comfortable discussing the details with a female officer.

Stress is profoundly damaging
It is well established that chronic and debilitating stress has a damaging effect on the physiology, mind, and emotions. Stress is often associated with increased cortisol, known as the “stress hormone”, which in chronic cases can lead to both high blood pressure and high blood sugar. Toxic stress may lead to physical, mental, and emotional ills including exhaustion, insomnia, depression, substance misuse, heart disease, and social problems. In fact, almost all disease is either caused or aggravated by stress.

The effects of stress on police women
Being a police officer can elevate a woman’s stress level exponentially. Working 12-hour days or nights can lead to symptoms of Shift Work Sleep Disorder (SWSD): insomnia, feeling sleepy when needing to be alert, concentration problems, lack of energy, irritability, and depression. These symptoms can adversely affect both the officer’s professional and personal life.

Officers on patrol are necessarily on high alert during their shift, often leading to chronically elevated adrenaline and cortisol levels and hyperarousal, a state similar to what is experienced by active-duty military personnel. Prolonged high levels of these two stress hormones increase the risk of heart disease, heart attack and stroke. Research published in the April 2010 issue of Journal of Clinical Investigation reported that high levels of these stress hormones also make it easier for cancer to spread.

In addition to the work stress normally associated with the frontline work of policing, women officers may also face the secondary stress of establishing themselves in a predominantly male work environment. This might result in feeling a need to overcompensate in their strength and agility, dealing with gender isolation or harassment, the need to make an extra effort to fit in with a traditional police culture, or concern about being overlooked for advancement.

In a 2015 research study with over 700 police officers in a British Columbia police department, one in three officers had clinically verifiable Post-Traumatic Stress Disorder—about 30 per cent of the entire police department. Symptoms included many of the following: moderate to severe anxiety, cynicism, constant worry, insomnia, irritability, agitation, misuse of alcohol and drugs, damaged relationships and even thoughts of suicide.

Transcendental meditation delivers the benefits of all three approaches in one stroke; these and other benefits have been rigorously documented in more than 400 peer-reviewed research studies.

The technique is effortless and easily learned. It involves no religion, no set of beliefs or change in lifestyle, and it can be practiced sitting comfortably anywhere. The TM technique can be easily integrated into the wellness program for women in high stress professions such as policing.

Repeatedly over four decades, in a broad range of published studies, the TM practice has been shown to significantly lower stress, and to help the body recover more quickly from stressful situations. Beyond mitigation of the psychological and physical manifestations of stress from police work, TM will strengthen and calm the nervous system on a daily basis to bring alertness and resilience to the work day. It will enable officers to leave the job at the end of the shift without the deleterious effects of stress that would otherwise impair personal and family life.

I feel very fortunate to have found TM early in my policing career. I believe daily TM practice has helped me deal with the long-term physical and emotional demands that come with serving the community through police work. Recently, we have been very fortunate to have some of our staff trained in TM. This training has included not only our police officers, but also our valuable civilian employees who support them. They are often the first to interact with the public when they need help. Sometimes a group of us meditate together at the end of the day. This is particularly rewarding for me as I know how important it is that we go home to our loved ones and families feeling calm, present, and at our best for them.

As the Canadian Women’s Wellness Initiative Board member overseeing the project with the Central Saanich Police Service, I have been invited to join Chief Sylven in speaking about this wellness program for officers during an upcoming conference that will be attended by 11 British Columbia municipal mayors, 11 police chiefs, and 11 police boards.

With Chief Sylven’s desire that every police department in Canada have both a workout room as well as a meditation room to allow every officer to be as fit as possible for duty, hopefully many more police services will look into offering this wellness program for their officers. The women and men of our police forces have chosen to serve and be responsible for the welfare of society and they put their lives on the line for us every day. It is society’s duty, in turn, to give them every highly effective tool available to protect them in their work.


Related
Policing and mothering: The combined challenges of work and home
“Share It. Don’t Wear It.”
Police artists group raises more than $2,500 for charity at 11th art show
Have you checked in on your sisters and brothers who are away from the job recently?