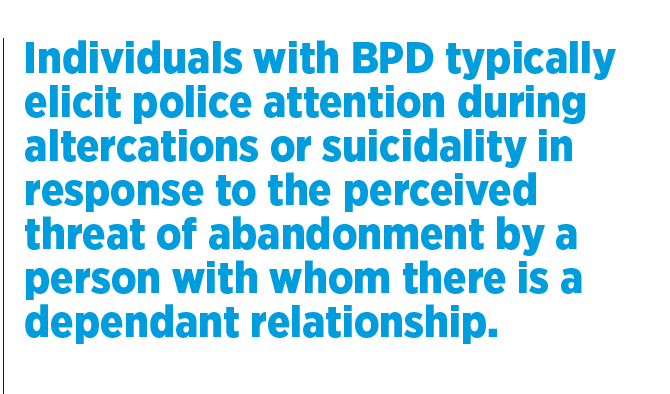 In response to a request from a reader, this column will address a personality disorder that can pose a challenge to both health professionals and law enforcement. Co-authoring this column is Const. Matthew Tomlin.

Everyone has a distinct personality. Personality is a way of thinking, feeling and behaving, and it is influenced by experiences, life situations and inherited characteristics.

According to the American Psychiatric Association, personality disorder is a way of thinking, feeling and behaving that deviates from the expectations of the culture, causes distress or problems functioning1. The disorder is made up of long-term patterns of behaviour and inner experiences that differ significantly from what is expected and causes distress or problems in functioning.

As an enduring pattern of inner experience, personality disorders affect at least two of the following areas: the way of thinking about oneself and others; the way of responding emotionally to others; interpersonal functioning; and impulse control.

There are 10 different personality disorders that are described in the psychiatric literature. In policing we tend to encounter mainly four of them:

BPD is a personality disorder characterized by a pattern of intense fears of abandonment, stormy interpersonal relationships, an unstable sense of self, and significant emotional dysregulation. 2 Hallmarks of BPD include emotional lability, repeated suicidal and self-harming behaviours, and marked impulsivity.

Impulsivity and emotional lability are central features of this disorder. Their emotions typically drive thoughts and behaviours, as opposed to the general population whose thoughts generally regulate such processes. Emotions can vacillate from even-tempered to extreme rage within short periods, negatively impacting personal relationships and day-to-day functioning. Individuals with BPD tend to view the world as hostile and might not recognize that others don’t perceive the world through the same lens. Innocuous behaviours of others might be perceived as threatening to a person with BPD. Many of the symptoms may be interpreted as bad behaviour, or a volatile or manipulative personality, by laypersons and professionals alike.

Typical features can include:

Individuals with BPD typically elicit police attention during altercations or suicidality in response to the perceived threat of abandonment by a person with whom there is a dependant relationship. Contact is often manifested in domestic incidents, well-being checks, and person-in-crisis calls for service. Due in part to recurrent expressions of suicidality and self-harm, BPD is recognized for its high system demands on first responder, crisis and hospital supports3. Although many are chronically suicidal, completed suicide occurs in up to 10 per cent of the BPD population, sometimes through miscalculation.

It is often frustrating for police officers for it is their duty to bring a borderline personality disordered patient to hospital, due to their erratic behaviour and/or suicidal ideation, but often they are not admitted. This is due to the fact that hospitalization is rarely beneficial to them due to their chronicity and the risk to being disruptive to the milieu.
Next month we will discuss intervention and crisis resolution skills that may assist you when engaging borderline personality disordered individuals.

Const. Matthew Tomlin serves in Ontario and is the mobile crisis response co-ordinator of his police service. Matthew is also adjunct faculty at several Ontario colleges. He holds a BA in Psychology, an MS in Criminal Justice, and is completing a PhD in Forensic Psychology. He can be contacted at matt.tomlin@startmail.com.