Evaluation amongst minorities and immigrants (justice and policing)

Canada is multicultural in its population and law. One would assume there would be no systematic discrimination towards minorities and immigrants in southern Alberta. Discrimination towards minorities and immigrants is documented in the Canadian Constitution and written as a law captioned in the Canadian Multicultural Act, 1988. However, what is the genuine life experience of these individuals in southern Alberta, and are their voices and concerns heard? Over the years, governments and policymakers have tried to give justice to this topic. It remains a concern within these communities, and we still see huge disparities resulting from systematic discrimination.

The sample selected for the study consisted of 215 residents of southern Alberta. The study results showed significant discrimination cases in justice and policing systems among the minority and immigrant communities. This research will add more information to the existing pool of knowledge on discrimination and help policymakers develop intervention strategies to combat systematic discrimination.

A 2016 Canadian survey noted that there are 845,220 immigrants within the area (Canada Statistics, 2019). Also, various province institutions have been highlighted in prevalent news media and scholarly articles as having discriminatory tendencies towards minorities and immigrant individuals. As a result, Alberta province was selected as the population of the study, with a narrower, deliberate consideration of southern Alberta. There are two primary sampling techniques, which are probability and non-probability sampling. The non-probability sampling method was selected for this study based on convenience and proximity to the region of study.

Discrimination in the justice system 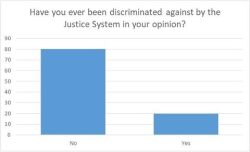 Does systematic discrimination that can affect organizational transparency and performance exist in the justice system and policing departments in southern Alberta?

Discrimination in the policing system 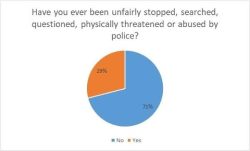 Figure 2 summarizes whether the participants were stopped, searched, questioned, physically threatened, or abused by police for unfair reasons. The police had discriminated against only 29 per cent of the respondents. The discriminated respondents were Non-Caucasian (43.3 per cent), Caucasian (30 per cent), and other races (16.9 per cent).

Sean Wentzel was born and raised in South Africa and served in the South African and British Army before immigrating to Canada. He worked for 10 years as a police officer. He enjoys his family and the outdoors, and loves what Canada has to offer. Wentzel holds a M.Sc. in Forensics and Criminology and a Doctorate of Business Administration.