News
Stats Can notes another increase in Crime Severity Index

Statistics Canada has released its data from the 2017 Crime Severity Index (CSI), which takes into account the number of crimes reported to police and the seriousness of those crimes. Police-reported crime in Canada, as measured by both the crime rate and the CSI, increased for the third consecutive year in 2017. 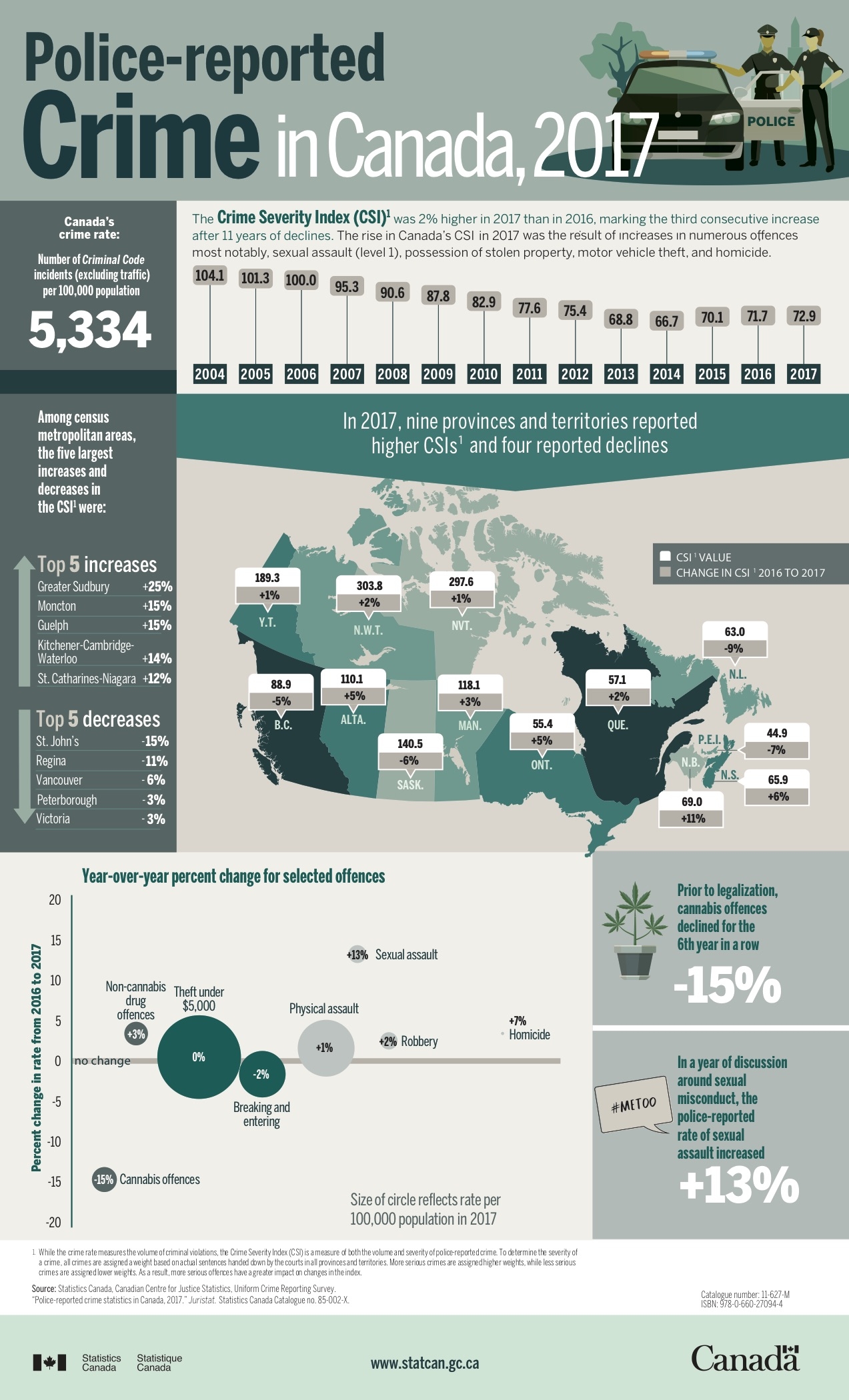 The national crime rate rose one per cent, while the police-reported CSI increased two per cent. This was the third consecutive increase in the CSI following an 11-year downward trend from 2003 to 2014.

Metropolitan areas
The largest rises in the CSI were in Greater Sudbury (+25 per cent), Moncton (+15 per cent), Guelph (+15 per cent) and Kitchener–Cambridge–Waterloo (+14 per cent). Among other offences, breaking and entering, and fraud were important contributors to the increases in all of these CMAs.

The largest decreases in the CSI were in St. John’s (-15 per cent), Regina (-11 per cent) and Vancouver (-6 per cent). Lower rates of breaking and entering were an important driver of the change in all three of these cities. In Regina, a decrease in robbery also contributed to the decline. In Vancouver, in addition to lower rates of breaking and entering, declines in theft of $5,000 or under and child pornography were also factors in the city’s lower CSI. Decreases in CSIs were also reported in Peterborough, Victoria, Kelowna, Saguenay, Abbotsford–Mission, Saskatoon and Brantford.

Rural versus urban
At the national level, rural areas have higher crime rates than urban areas. In 2017, rural police services served 17% of Canada’s population, yet they reported 21% of the country’s police-reported crime. Police in rural areas reported 25% of violent crime, 18% of property crime and 24% of other Criminal Code offences in Canada.

Firearms
Statistics Canada’s annual 2017 data show that there were more than 7,700 victims of violent crime in Canada where a firearm was present, continuing the upward trend that began in 2013 (excludes the province of Quebec and the Saint John Police Force due to data quality issues). Since 2009, about 6 in 10 firearm-related violent crimes have involved handguns.

For more data, including the numbers for police-reported sexual assaults and the decline in cannabis offences, click here.