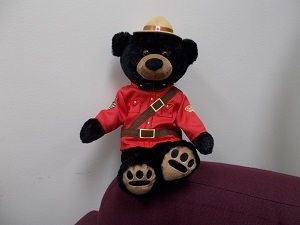 “Since Bear was a cub, growing up on Vancouver Island, it has been a dream to dip its big paws into the frigid waters of the Atlantic Ocean, off the coast of Newfoundland,” the service stated.

Bear has been doing research and over the past year has “diligently and methodically been charting out the locations of the many towns, cities and RCMP detachments — including municipal police agencies — scattered across Canada.”

Bear was created by the Nanaimo RCMP Community Policing Section and it will have a note attached to its thick fur, letting the public know about its journey and ultimate goal of travelling to Newfoundland.

Bear’s hashtag will be #NanaimoBear and selfies and stories of the journey are welcomed and encouraged.

Bear’s first road trip was to Chilliwack, home of the Pacific Regional Training Centre, where RCMP officers from across B.C. train.

“Who knows where Bear will go to from there, but we hope through Facebook and Twitter, and through the hashtag, Canadians and visitors, far and wide, will post and share Bear’s many adventures,” said Const. Gary O’Brien of the Nanaimo RCMP.