Police-reported hate crimes in Canada rose three per cent from 2015 to 2016, according to a new report released by Statistics Canada at the end of November 2017. Police reported 1,409 hate crimes in Canada in 2016, 47 more than in 2015. This represented less than 0.1 per cent of the 1,895,546 crimes (excluding traffic violations) that were reported by police services. StatsCan says the increase in hate crimes was a result of more incidents targeting South Asians and Arabs or West Asians, the Jewish population, and people based on their sexual orientation. In contrast, hate crimes against Muslims and Catholics declined in 2016. 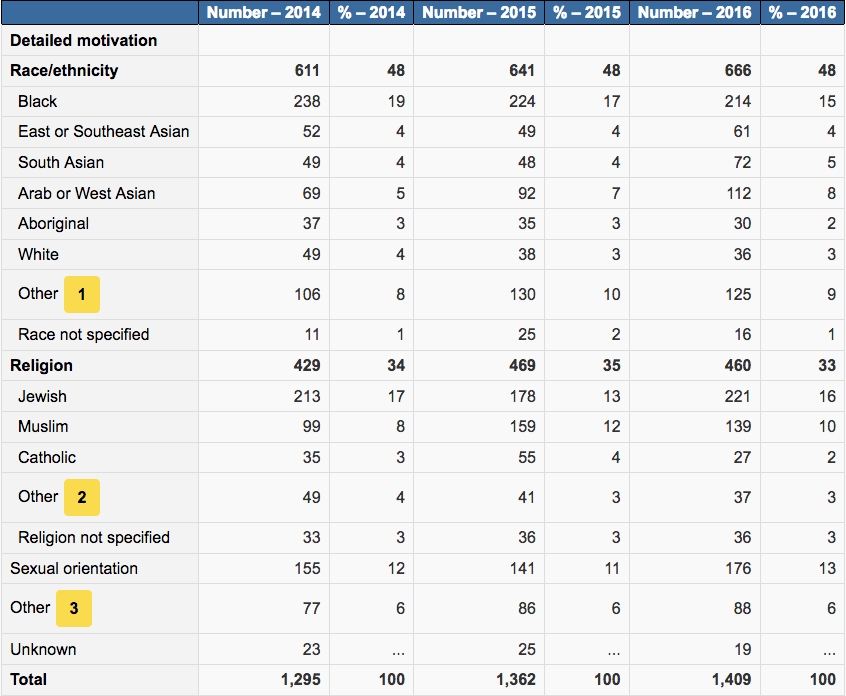 Crimes motivated by hatred of East or Southeast Asian populations also increased from 2015 to 2016, rising from 49 to 61 incidents. While British Columbia reported 17 more incidents than the previous year, Ontario reported 7 fewer.

Police-reported hate crime against Aboriginal peoples continued to account for a relatively small proportion of hate crimes (2 per cent), falling from 35 to 30 incidents.

Although down 4 per cent (from 224 incidents to 214 in 2016), crimes targeting Black populations remained the most common type of hate crime related to race or ethnicity at 15 per cent of all hate crimes.

Similarly, after an increase in 2015, hate crimes against Catholics also decreased, from 55 to 27 in 2016. Ontario reported 16 fewer incidents, and declines were also seen in Quebec (-7) and the Atlantic provinces (-5).

Among the provinces, the greatest increase in the absolute number of police-reported hate crimes was observed in Quebec, where incidents rose from 270 in 2015 to 327 in 2016. This increase was mostly attributable to more hate crimes targeting Arabs and West Asians, the Jewish population and sexual orientation.

British Columbia also reported more hate crimes, rising from 164 to 211. The increase was attributable to crimes against the East or Southeast Asian and South Asian populations, which doubled from 2015 to 2016 (from 15 to 32 and from 11 to 24, respectively).

In contrast, the number of police-reported hate crimes in Alberta declined from 193 in 2015 to 139 in 2016 due to fewer crimes targeting religion.

Hate crimes were more violent in 2016
Based on data from police services that provided detailed information on hate crimes for both 2015 and 2016, an increased violence was observed in hate crimes. For example, violent hate-motivated crimes (for example, assault, threats, criminal harassment and other violent offences) rose from 487 in 2015 to 563 in 2016, up 16 per cent. In 2016, 43 per cent of hate crimes were violent, compared with 38 per cent in 2015.

More stats from the report are available here.