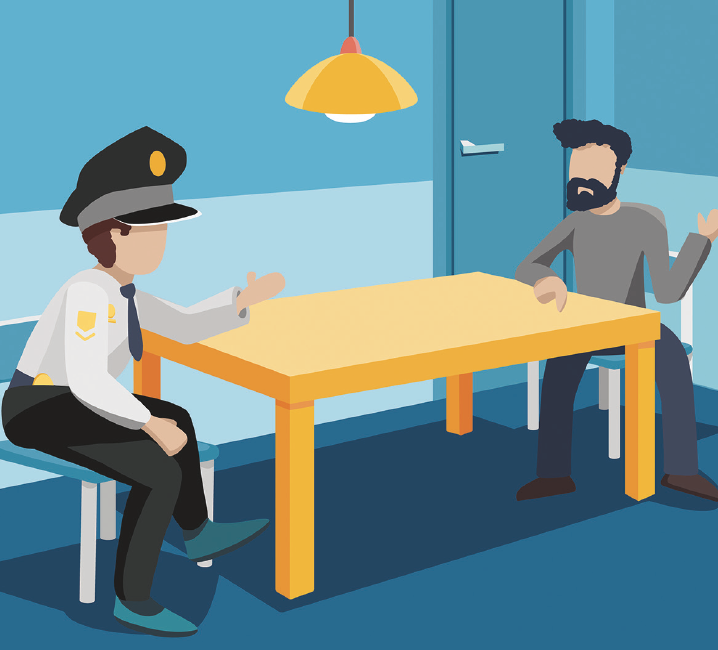 For decades much police questioning of suspects in North America has taken place in small, stark spaces commonly referred to as “hard” interview rooms.1 Given the popularity of this practice one might assume that evidence indicates the use of such spaces increases the probability of suspects choosing to talk to police. It does not. In fact, scientific research conducted over the past two decades suggests the opposite. The use of small interview rooms may actually inhibit the establishment of rapport and, by so doing, decrease the likelihood of suspects choosing to disclose information when questioned.

It is widely acknowledged that establishing rapport with a suspect increases the chances of them co-operating with investigators by providing information.1,2,3 Rapport has been called the “heart of the interview,” and is broadly recognized as essential to success when questioning suspects.4,5,6 Studies of real-world suspect interviews indicate that higher levels of rapport are associated with higher rates of confessions; increased provision of information by suspects generally; and, less uncooperative suspect behaviours.7,8,9,10

It is also well-established that the physical context in which a social interaction takes place — such as the questioning of a suspect by police — can play a significant role in establishing rapport. The role of “context manipulation” (i.e., purposely manipulating aspects of the physical environment) in investigative interviews has been studied by scientists because of its potential for improving interview outcomes.

One example of context manipulation would be varying the size of the room in which a suspect is questioned by choosing a larger rather than a smaller room. Recent studies looking at the impact of room size on rapport agree that conducting interviews in larger rather than smaller rooms can have a positive impact on rapport building. These findings contradict claims made by some trainers and beliefs held by many police members; that smaller interview rooms foster closeness between suspect and investigator.11, 1, 12,13

Another form of context manipulation that has been encouraged in traditional interview training is the practice of the questioner gradually moving closer to the suspect during an interview. The reason given for this practice is that “…the closer a person is to someone physically, the closer he or she becomes to that person psychologically.” This “closeness” is supposed to make it more difficult for the suspect to resist the theme (i.e., moral excuse) provided by the questioner to encourage a confession.11

The problem is this claim lacks supporting evidence.14 Research actually indicates that it is encouraging a sense of autonomy in a suspect and making them feel less pressured not more, that decreases their resistance and increases the chances of them co-operating.5,15 In other words, it is giving a suspect room and not taking it away that is more likely to lead to a positive outcome.

Certain investigative practices — such as questioning suspects in small rooms, and/or encroaching on their personal space during interviews — have been around for so long many investigators simply regard them as “the way things are done.” However, professionalism demands that investigators regularly reflect on why they employ certain investigative methods. The use of methods based merely on tradition or on unsubstantiated claims should be discouraged, while the use of methods based on scientific research demonstrating their value should be embraced. Evidence-based interviewing practices, which create room for rapport and encourage the voluntary disclosure of reliable information by suspects, are essential tools for investigative professionals.

*This column originally appeared in the June/July 2020 issue of Blue Line.

2. Abbe, A., et. al., (2013) The role of rapport in investigative interviewing: A review. Journal of Investigative Psychology and Offender Profiling, 1, 237.

8. Walsh, D., et. al., (2012) Examining rapport in investigative interviews with suspects: Does its building and maintenance work? Journal of Police and Criminal Psychology, 27, 84.

9. Collins, K., et. al., (2019) No rapport, no comment: The relationship between rapport and communication during investigative interviews with suspects. Journal of Investigative Psychology and Offender Profiling, 16, 18.